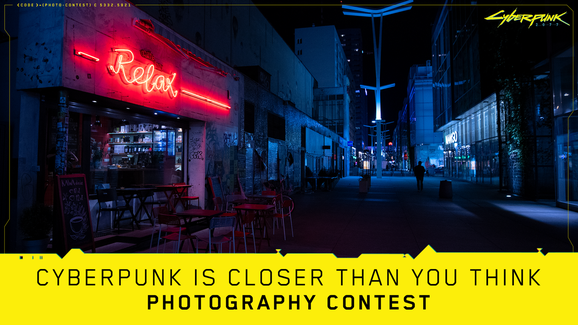 Fancy yourself a photographer? Enter the official Cyberpunk 2077 photography contest.

The developer is inviting participants to take part in the contest, which is meant to invite talented camera enthusiasts to invoke the game's "dark future vibes" in the real world by way of photography. Entries are officially open today as of October 14, and entries may be submitted via official website for the contest. The deadline for submissions is December 16, 2019, and winners will be announced by January 2020.

The three winning entries will be chosen by award-winning photographer Liam Wong, a panel of experts from CD Projekt RED, and some members of the community. Ten entries that receive honors for the community will be selected to win prizes.

The prize include shares in prize pool money, Cyberpunk 2077 Collector's Editions, NVIDIA GeForce RTX 2080 Ti/S graphics cards, Adobe Creative Cloud licenses, and other assorted Cyberpunk 2077 swag. Basically, it totally behooves you to enter this contest and see if you can jump in with a cool photo of your own.

Cyberpunk 2077 is still a ways off, though. It will still be a couple of months even after the contest winners are itnroduced before we can all get our hands on it. It's set to debut on Xbox One, PlayStation 4, and PC on April 16, 2020. Are you going to be picking up a copy or participating in the photography contest? Let us see your best shots!