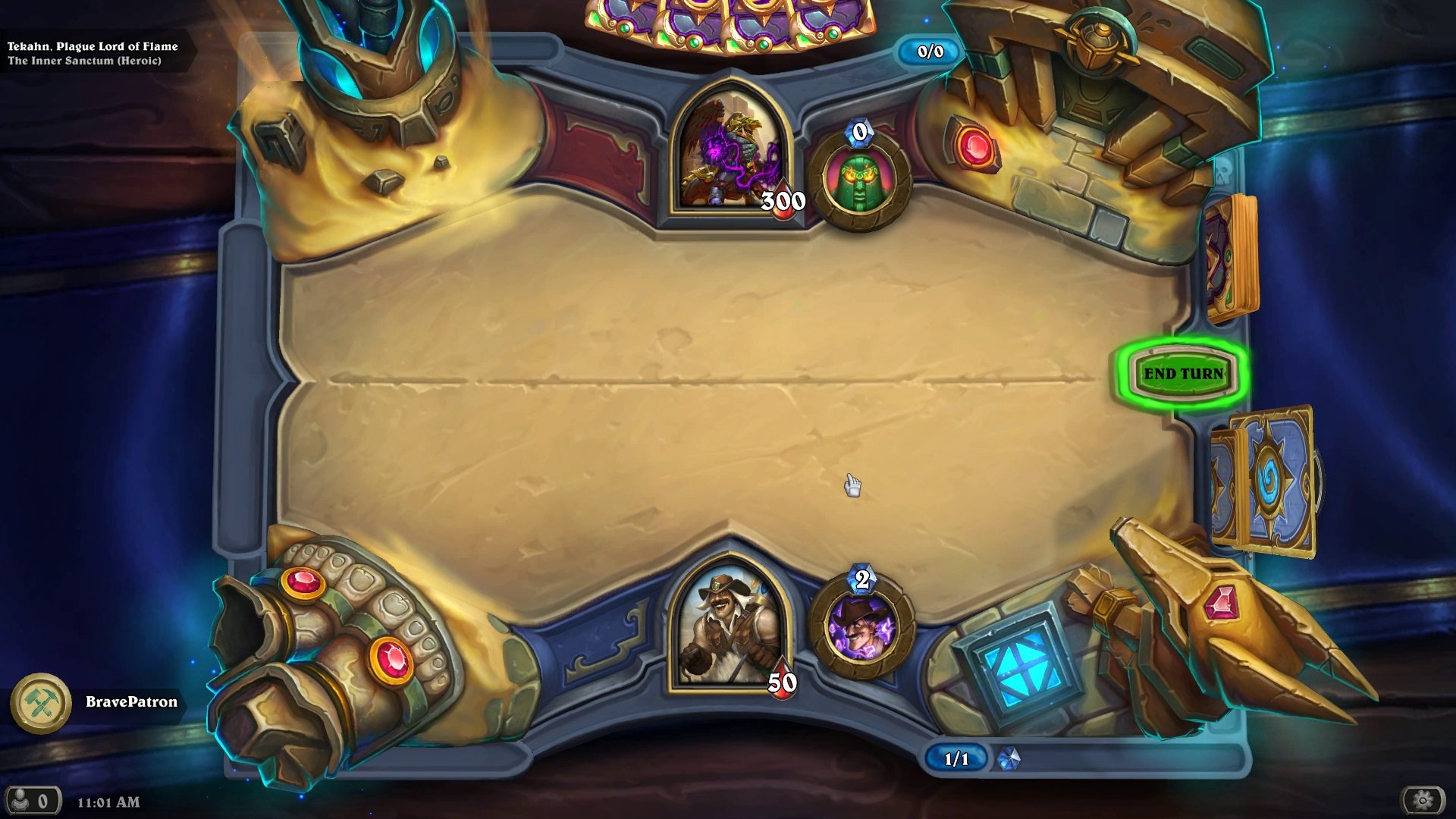 How to beat Tekahn, Plague Lord of Flame - Hearthstone

If you'e played through the first four chapters of Hearthstone's Tombs of Terror adventure, then you've discovered the League of E.V.I.L.'s sinister plans in Uldum. After releasing the four Plague Lords of the desert, the nefarious Tekahn has used their power to become the fifth and final Plague Lord. Now he is Tekahn, Plague Lord of Flame and only the League of Explorers can stop him.

This is not like the previous four chapters. There is only one battle here in Chapter V and it's against Tekahn himself. His power is tremendous, but you'll now have all four League of Explorers on your side. You'll also have any of the treasures you've unlocked, so go back and grab any you missed, if necessary. We'll also go over a neat little trick to help you knock out Tekahn quickly at the end.

How to beat Tekahn, Plague Lord of Flame - Hearthstone

PHASE 1
(2) Awaken the Flame
Hero Power
Imbue a Sanctum Golem with the power of fire.

First things's first. Let's go over what a Sanctum Golem is before anything else. For four mana, Tekahn will summon a 6/6 Sanctum Golem that can't move. Once he uses his Hero Power to bring it to life, the Sanctum Golem becomes an Enflamed Golem, which gets a Deathrattle that deals three damage to all minions, at which point it will summon another Sanctum Golem.

Your best strategy will be to use Tekahn's own power against him and use the Enflamed Golem's Deathrattle to clear out Tekahn's minions whenever possible. This won't be easy, though. Tekahn will play Rakanishu on Turn 2, which will turn all of Tekahn's Lackeys into 4/4s for the remainder of the game. And Tekahn has many Lackey-generating resources, so this will become difficult to deal with over time. Use board control spells whenever possible, especially early on when using Reno. If you're willing to eat a few hits, wait until multiple Enflamed Golems are active and set them off at the same time, creating a massive chain reaction that clears the board.

If you're using Sir Finley, be careful about using his trusty Truesilver Lance on Heroic difficulty. On Heroic, Tekahn will pack more than one Gluttonous Ooze and make you pay.

PHASE 2
(2) Curse of Flame
Hero Power
Choose an enemy minion. If it lives until your next turn, deal 5 damage to all characters.

You'll want to be careful about using higher-health minions with Tekahn's second Hero Power. He'll be mindful about making your hardest-to-remove minion its target. If something gets caught by Curse of Flame and threatens to clear your side of the board, use spells like Mutate or something like the Witchy Lackey to undo it.

Your safest bet here is to try and get through this second phase as quickly as possible. Take advantage of your treasures, along with harder-hitting legendaries like The Lich King and get through this phase as fast as you can. Tekahn will have a slew of new legendaries to throw at you, along with an assembly line of 4/4 Lackeys that can devastate you quickly if you let his board get out of control.

PHASE 3
Soul Pyre
Passive Hero Power
After a player plays a card, they take damage equal to its Cost.

If you have high-cost cards in this final phase, they're likely to become a liability. You will take damage equal to that card's cost, which isn't good for you, because even in this final phase, Tekahn likely has more health than you do. On top of that, he'll still have a lot of Lackeys available to him, which will only dock him one Health each. And even if you do play something big, Tekahn might have some sneaky minion removal spells available to him.

To make this harder still, Tekahn will immediately play the 10-Mana spell "The Final Plague?!" This summons all four of the Old Gods: the 6/6 C'Thun, the 5/7 N'Zoth, the Corruptor, Y'Shaarj, Rage Unbound, and Yogg-Saron, Hope's End. And with Y'Shaarj's effect, he'll bring out another of Tekahn's minions from his deck at the end of the turn. So you're now staring down five minions to start this final phase. This is where you've hopefully saved a powerful area-of-effect spell like Blizzard, because it's going to save your life here, even if it does cost you six Health.

This is Tekahn's last gasp and he is absolutely not going to make it easy on you. If you've saved Lifesteal minions like Zilliax, now's the time to play them, because you're going to need something to mitigate the Health cost from Tekahn's Hero Power.

Even if it looks like you're on the verge of victory, Tekahn can still unleash some nasty surprises, like Hakkar, the Soulflayer, Mal'Ganis (which will make Tekahn immune to his own Hero Power), and Fel Lord Betrug.

It's possible to win here if you keep Tekahn's side of the board clear and have a decent board from the phase prior, but it's not going to be easy. If you're trying to play a straightforward fight, this could be where you lose, especially on Heroic. Yes, Tekahn is more than capable of wiping out all four League of Explorers in this final phase. Use your treasures strategically and you should be able to prevail, but even then, you'll need some luck on your side.

But what if I told you that there's a much easier way to defeat Tekahn? You'd probably say, "Wait, why didn't you lead with that?" And I would laugh heartily. Allow me to tell you about the easy way to beat Tekahn.

How to beat Tekahn the easy way - Hearthstone

It is entirely possible to knock out Tekahn from the first phase and give him the one-turn kill of a lifetime. But you're going to need a few ingredients that you've picked up along the way. You'll need Reno Jackson and all of his treasures to make this work. It'll take a lot of trouble, but it's worth it.

Play the control game for the duration of Reno's deck, casting control spells and taking out Enflamed Golems to help you ward off Tekahn's minions. You'll want to play a lot of spells for the big whammy at the end. Now let's get to the fun part.

One of Reno's treasures is a 2-mana minion named Lei Flamepaw. Lei's effect is if you play a spell, he'll play it again on the same target. Use Shadow of Death on Lei to shuffle three Shadows into Reno's deck. Lei's effect will kick in and you'll shuffle another three Shadows for a total of six. If possible, play Shadow of Death twice, just for fun.

This is not an easy combo to pull off, because a lot of things need to go right. You have to have the Gatling Wand ready, you have to have it sufficiently powered, and you have to draw Lei Flamepaw and have copies of Shadow of Death ready to cast on him. A lot can go wrong, but don't feel discouraged. If Reno dies, start the fight over and try again.

It's not an easy combo to pull off, but it is the easiest way to skip the second and third phases entirely and skipping that final phase is definitely worth the effort. Regardless of how you go about beating Tekahn, once you do, enjoy the final dialogue and the teases for where Hearthstone's ongoing Year of the Dragon storyline with the League of E.V.I.L. may be going.

Congratulations on taking care of Tekahn, Plague Lord of Flame and saving Uldum! You have triumphed! Now we wait to see what's next for Hearthstone's single-player adventures. Hearthstone: Saviors of Uldum and the Tombs of Terror adventure are available now.