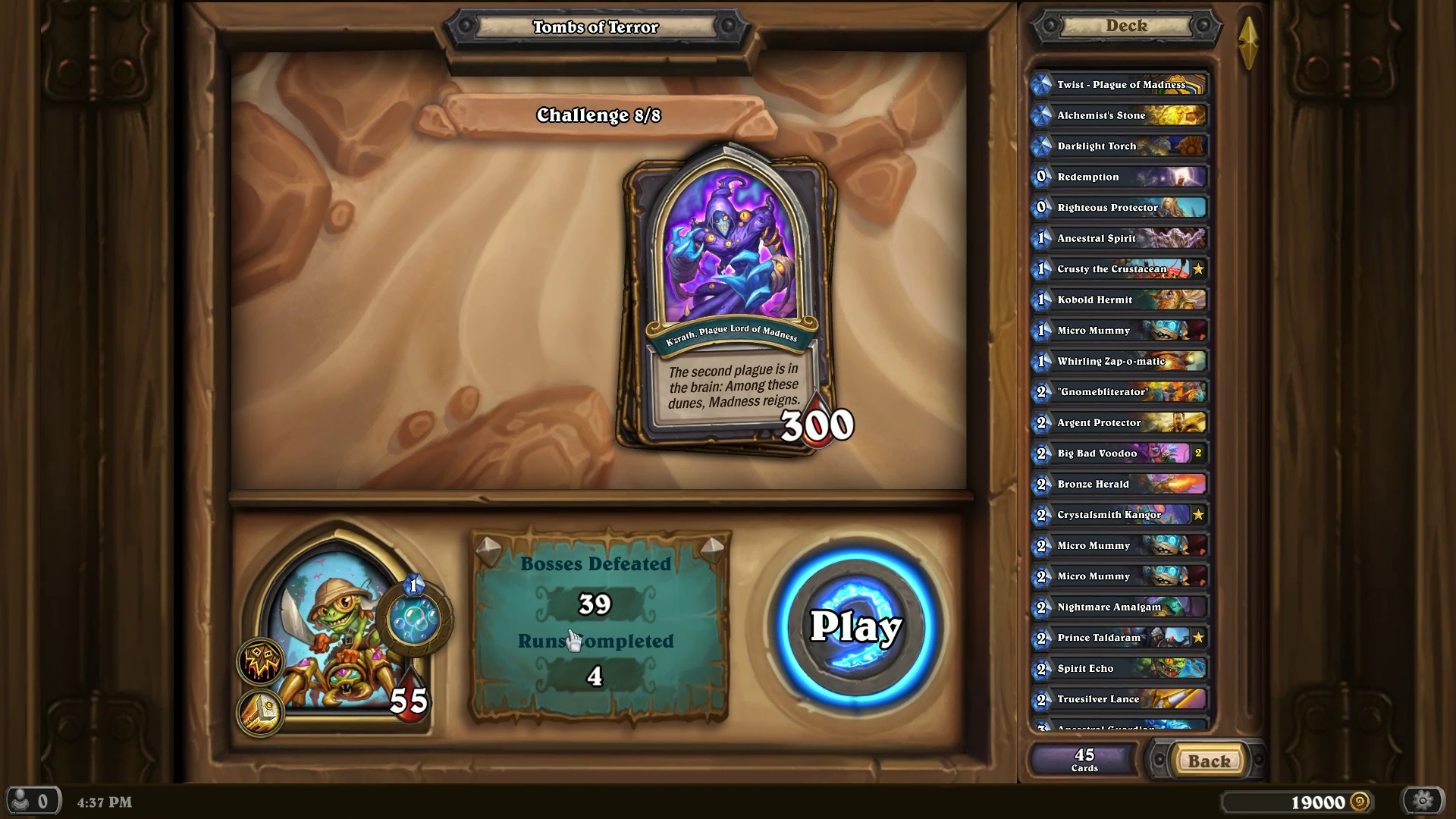 Hearthstone: How to beat K'zrath, Plague Lord of Madness

The League of E.V.I.L. dangerous machinations in the deserts of Uldum continue. Their master plan is unknown, but their latest scheme has involved unleashing the four Plague Lords of Uldum. Only the League of Explorers has what it takes to stop them, but the Plague Lords will not go down easy. In fact, they're probably the biggest challenge so far for anyone who has embarked on Hearthstone's single-player adventures.

How to defeat K'zrath, Plague Lord of Madness

K'zrath's opening Hero Power might look familiar to those who have played through The Dalaran Heist. Yes, it's essentially a beefed-up version of the Carousel Griffin. Every turn, K'zrath will rotate minions counter-clockwise, causing them to switch sides. He'll look to take advantage of things like Devilsaur Egg and Serpent Egg to give them some attack power.

Pass your opening turns to give yourself a chance to fill up your hand. K'zrath won't hesitate to play multiple minions, which means you'll get one of them for free. At this point, look at what you have in your hand. Positioning will be very important in this fight's opening minutes, so you'll want to put your weaker minions on the right side of the board.

The really easy way to minimize the impact of the rotating board is to just fill your board up with as many minions as possiblie. If you've found the Alchemist's Stone treasure, you're going to be in a lot of luck. Reduce the cost of the cards in your hand and just throw whatever you have out there to pour the pressure on early. Use Sir Finley's Bubble Blower Hero Power to refill your minion ranks whenever necessary. Handbuff options will also be a big help, since Alchemist's Stone can lower the cost of minions like The Mistcaller that are normally too expensive in other situations.

During the early parts of the fight, you'll notice K'zrath start laying out C'Thun minions. Yes, he has C'Thun and its stats can balloon out of control if you're not careful. K'zrath will mostly save C'Thun for the late game, but have one removal spell handy, just in case.

PHASE 2
(0) Evoke Panic
Hero Power
Force the minion with the lowest Health to attack one of its neighbors.

PHASE 2 (Heroic)
(0) Evoke Panic
Hero Power
Force an enemy minion with the lowest Health to attack one of its neighbors.

You'd better make sure your minions are up to the task of getting through this third phase quickly. K'zrath's Hero Power becomes a pseudo-Betrayal. You can fudge things with Normal by taking one of K'zrath's minions and reducing its Health, but that's not going to fly in Heroic. Try and use Divine Shield minions to reduce the pain.

By this point, the Bubble Blower and Alchemist's Stone combination should give you more than enough resources to keep filling up the board. You're going to want to get moving quickly too, because K'zrath will play Surrender to Madness, which will significantly upgrade his minions for the rest of the game. This could prove particularly troublesome if he wipes out one of your minions with Blade of C'Thun, which becomes a 7/7 with the Surrender to Madness buff.

K'zrath is going to attempt to overpower you again, not only reducing your minion health with a debilitating Hero Power, but also by playing another Surrender to Madness. At this point, you're going to need all the firepower you can get and you won't be able to help but try to control the board.

If you absolutely have to, trade in your lower-health (but hopefully high attack) minions to keep the board clear. Another handy tip to withstand the health pop is to give your minions Divine Shield whenever possible. Use Bubble Blower to discover minions like Argent Protector and Grimestreet Protector that can grant your minions an extra hit with Divine Shield.

Bubble Blower and Alchemist's Stone should easily keep you in this fight. K'zrath will put up resistance with Mass Hysteria and Psychic Scream, but he will rapidly run out of gas and you should still be able to fill up your board without any issue.

The other most important thing to note in this fight is that whenever K'zrath does get around to playing C'Thun, it is going to hurt. Not only will it be at well over 30 attack power, but if it clears the board, the Chapter II "Plague of Madness" twist will mean it more than likely goes straight at your face at the end of its turn. Make sure you are heavily armored up by playing High Priest Thekal and replenishing your Health total whenever possible. Take C'Thun's best shot and then take it out with that removal spell you've saved up. If you're really clever, use Aldor Peacekeeper and then use K'zrath's own Plague of Madness spell against him. With the Plague Lord of Madness' secrete weapon out the window, you should be able to complete the fight with no further trouble.