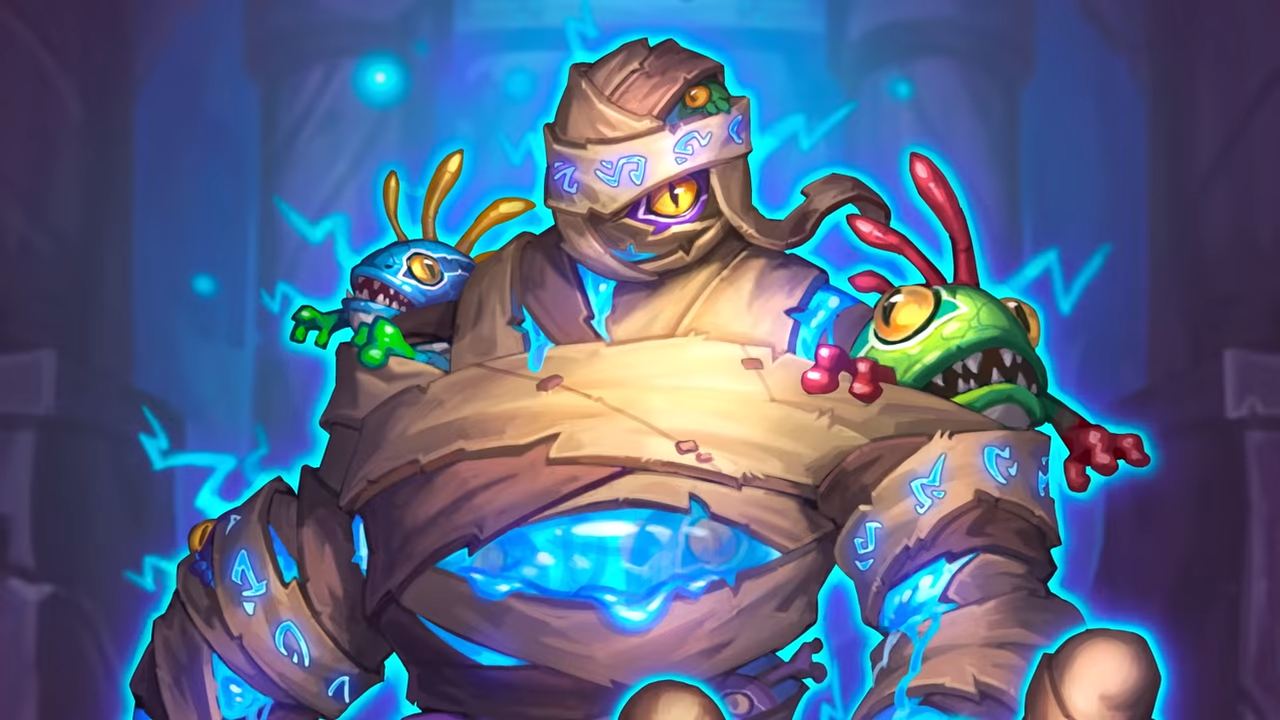 Hearthstone: How to beat Vesh, Plague Lord of Murlocs

Azeroth is in danger. If the League of E.V.I.L. can strap rockets to the floating city of Dalaran and send it flying to parts unknown, who knows what else these fiends are capable of doing? Fortunately, the League of Explorers is here to band together and save the day from the League's plan... whatever it is. One thing that they do know is that the four Plague Lords are here to present solo adventurers with their greatest challenge to date.

How to defeat Vesh, Plague Lord of Murlocs

PHASE 1
Made of Murlocs
Passive Hero Power
You are Immune. After a Murloc dies, lose 3 Health.

As his name implies, Vesh has a veritable smorgasbord of Murlocs. Individually, they may not present much of a threat, but Vesh can fill his board with them quickly, especially if he throws down Underbelly Angler to replenish his hand. They can overwhelm you if you're not careful.

To help you stay ahead on Health, try and mulligan for Amakir the Light. This minion stands at 5/8 and is unlikely to get taken down by lower-attack Murlocs. Use the free healing spells he provides to keep him alive and also you alive. Beware of Toxfin, which can take down anything by giving a friendly Murloc Poisonous. If you pull Cheat Death, use it to help bring Amakir back to your hand.

Vesh's opening Hero Power means you're forced to play the control game, but Amakir should help you stay ahead of the curve, especially if it gives you something like a free Holy Nova. More importantly, if you get the opportunity to equip yourself with Cloak of Invisibility at some point during your run, do it! Vesh won't have the spell power to take out Amakir if he's in permanent Stealth and that means you'll have a parade of heal spells to keep you in the fight. That'll be especially crucial if Vesh plays Tip the Scales and comes out of it with a beefed-up Old Murk-Eye.

Use area-of-effect spells and Reno's Arcane Craftiness Hero Power to slowly chip away at Vesh's Murloc ranks. It won't be long before you jump into Phase 2.

Chapter I's Twist is "Plague of Murlocs" which will summon a random Murloc for either player when they draw a "Surprise! Murlocs!" card. This becomes a major drawback in Heroic, since Vesh can destroy one of your Murlocs to summon a Scaly Golem, which is a 0/4 Taunt with a Deathrattle that gives +1/+1 to all of Vesh's Murlocs on-board.

Fortunately for you, the aforementioned Cloak of Invisibility means that Vesh can't target any of your Murlocs, which will force him to sacrifice his own. The strategy will not change here, but the primary difference is that Vesh's face is now vulnerable. Keep the board under control, use Amakir's heal spells to keep everything at tip top health, and pour on the pressure.

At this point, it shouldn't take much trouble to push Vesh into Phase 3.

PHASE 3
(15) Mur-nado
Hero Power
Shuffle all minions into your deck. after a Murloc dies, reduce this cost by (1).

PHASE 3 (Heroic)
(10) Mur-nado
Hero Power
Shuffle all minions into your deck. after a Murloc dies, reduce this cost by (1).

Now things get scary. Vesh will start his final phase by unleashing Mur-nado and no amount of Stealth can stop it. This move will take all of your minions and shuffle them into Vesh's deck, essentially making him Fatigue-proof for the final part of the fight.

By this point, you will have used up a lot of spells. And if that's the case, then The Gatling Wand should be powered up to an obscene degree. If the board is clear, unleash The Gatling Wand's full power to bring Vesh to his knees. Use any remaining burn spells you may have if you need a little extra push to finish this battle.