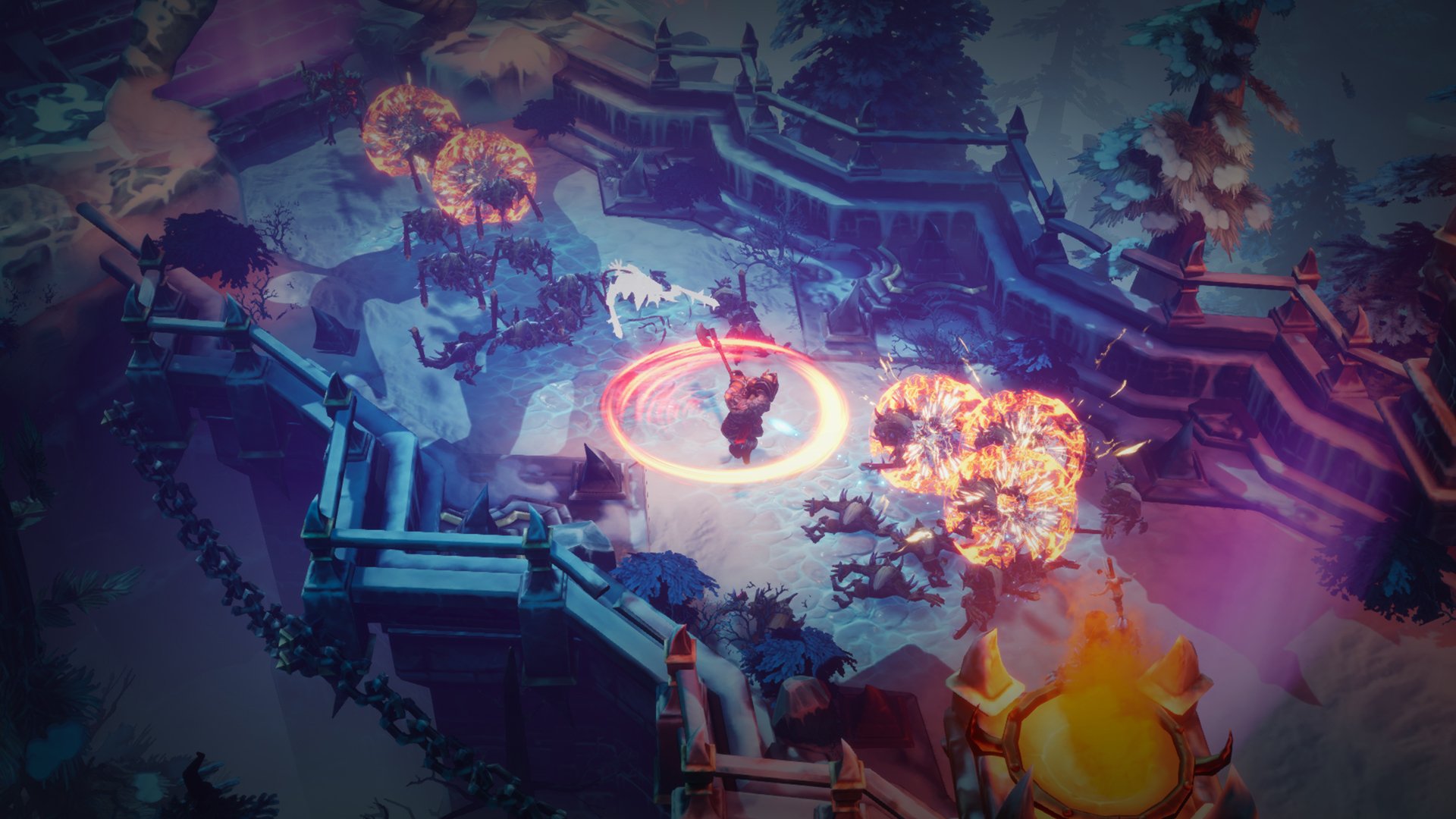 Like many recent ARPG games, Pagan Online aims to capture a dedicated audience without taking the time to learn from the mistakes and solutions of titles that came before it. What could have been a sleeper hit ends up being nothing more than a promise of a great title to come.

A new presentation of old hat

Pagan Online can best be described as an ARPG set against the backdrop of Slavic mythology. It includes many of the genre tropes but manages to stand out from the pack thanks to some interesting decisions. First off, its roster of heroes meaningfully offers variety in play styles that help to keep the grind fresh. While other games of this type may offer two or three archetypes, Pagan Online has ten available heroes that offer a welcome mixup in the way you approach battling hordes of enemies and bosses.

Some of the heroes are melee-type warriors that resemble the kind of stuff you see in virtually every fantasy game ever released. Ranged characters and casters are available and, in my experience, offer the most fun way to work through Pagan Online. Unlike your Diablos, Torchlights, and Path of Exiles, hero movement is handled by the WASD keys, with the mouse being used to aim and attack. Ranged combat can feel quite similar to any number of arcade-style shooters as you launch attacks at enemies while dodging projectiles. It generally works in practice and is a nice bit of spice to sprinkle on the generic ARPG formula, but don’t go in expecting it to feel smooth or precise like Geometry Wars and similar shooters.

Graphically, the game has an appealing look, with some good textures, models, and an art style that suits the setting. The various particle effects are strong and their often vibrant colors help to keep your eyes entertained during the inevitable grind. It runs on Unreal Engine 4, so the technical side of things should have a fairly solid foundation. A particularly strong point for the game is the voice acting. It was nice to have a game with strong vocal performances throughout that didn’t sound like the same actors that seem to populate most AAA titles. I’m not familiar with the part of the world the game is set, so I am unable to pick up on any nuance in accents and such, but against the backdrop of the gameplay, the vocals were always a standout.

A dark fog has taken over the local lands and the Gods normally tasked with protecting the innocent are not around to keep the balance of good and evil in order. Your task as a hero of Pagan Online is to push back the evil and figure out what happened to the gods. You wake up in a hub world known as the Pantheon, a place where all your ARPG’ing will originate from. It hosts your support crew and serves as a launching pad into the instanced encounters that make up the bulk of the gameplay. You can craft items from here, sell stuff you pick up to the vendor, or any of the other common tasks that are commonplace in RPGs.

Unlike your typical RPG game, there is no large map that you work through or even a series of smaller, interconnected areas. You simply walk to one end of the Pantheon, click a big orb, and then choose to drop into the action in what appear to be nondescript battle arenas masquerading as a game world. There are main campaign missions and side-missions. The side missions task you with defending an area, assassinating an elite, and other similar tasks.

You enter these mission areas, but they don’t feel like missions, but rather cramped, lifeless exercises in monster killing. They look like some sort of open area but are blocked off by force fields that ensure you stick to the area where the game dumps monsters onto you. There is always a giant arrow pointing to where you need to move for the next bucket of monsters to be dumped on you. The concept of exploration must not be a part of Slavic mythology.

A trip worth taking?

You can earn XP and item drops, but only by clearing these monster box missions. If you die for any reason, get disconnected, or crash, you get nothing. You’ll often find yourself outclassed by enemies in a new mission and there is no way to progress other than going to what you’ve already cleared and grinding endlessly. You’ll get crafting materials that allow you to create some solid items and random loot drops, but overall itemization in the game is incredibly lackluster. Other times I found that you don’t even have enough inventory space to pick up what’s dropped and there’s no way to portal back to the Pantheon during a mission. If you enter the portal after a clear, all the loot disappears. Item affixes and magical properties never feel like anything other than numbers on a spreadsheet and at a certain point, picking up anything feels like a waste of time. Unlike what you might see in DIablo, gear drops are not weighted towards your current hero, so you might end up spending lots of time without getting meaningful drops for your main hero.

There is usually a smattering of items on the ground once you manage to clear a mission, but each thing has to be manually clicked like in ARPGs that are two decades old. Your pet doesn’t even pick up the gold pieces on the ground and after a few hours, I stopped caring about it as well. I was not hindered by the decision since there doesn’t seem to be anything to spend money on outside of expansion of your account storage. Inexplicably, you can only sell trash items to the vendor, or at least I could never figure out how to buy anything. I’m not sure if this is the intended design, a bug, or my misunderstanding of the UI design.

As much as I enjoyed the dialogue, the boxes of text that accompany it prove to be mind-numbingly frustrating. During combat, the box may pop up in the center of the screen and if the mouse cursor goes over it, my inputs for attacks or skills are rendered unavailable. It really sucks to get killed during a mission due to this, especially when you have to do everything over from the start. I also had a bug that plagued me through the entire game where each time monsters are spawned in (this happens thousands of times), the frame rate drops to zero for a split second. It makes playing feel awful and when I went on the game’s official discord, I was informed that everyone’s client exhibited that behavior. There are other regular performance drops I encountered on my machine (9900K/1080 Ti) that I was unable to nail down to CPU or GPU performance, so they may have been related to network latency.

For all their faults, busted games can still find redemption in cooperative play. Pagan Online touts cooperative play, but it is limited to the side challenges. The main campaign is single-player only. How does this game end up with “Online” in the title when the main attraction might as well be played offline? There are leaderboards and other connected components that help to justify the name, but I expect the cooperative set up to be a dealbreaker for many.

Even hopping between the various heroes is a bummer. You can only choose one of the heroes at the outset and must grind it out until you begin to acquire soul shards. These are the currency used to unlock additional heroes. You can earn them from specific Assassination missions, but getting access to these missions requires that you grind out key fragments before you can even try. If you’ve cleared the main campaign, it seems that the endgame is centered around grinding soul shards to fully-unlock your hero Rolodex.

So much of the experience feels like it was designed to be part of a cell phone game or a free-to-play game. Grinding is the name of the game here, and much of the game feels like it's designed to eat up playtime to extend engagement. For better or worse, Pagan Online is a one-time purchase game where you don’t need to worry about microtransactions or paying-to-win, but the game sure feels like it was balanced for that type of monetization. Still, I can totally see this game sinking its hooks into some players, and if the grind is the appeal, Pagan Online could be a winner for those players.

I have definitely been harsh on Pagan Online, directly comparing it to its contemporaries and the tentpoles of the genre that came before it. Ultimately, this is a game that sells for $20 from day one. It is not a AAA title from a major publisher with a 200+ person development team. It is a small project from a very small team and it is clearly a labor of love. The unique approach, art, and vocal performances indicate the passion behind the product.

Still, Pagan Online suffers from some baffling design choices, bugs, and repetition. It does add some new ideas that show it aims to be better than what came before it but frustratingly fails to build off the problems solved by other ARPGs years ago. I can see a future where constant development and iteration can turn this game into something very solid, but that hypothetical game does not exist as of right now.