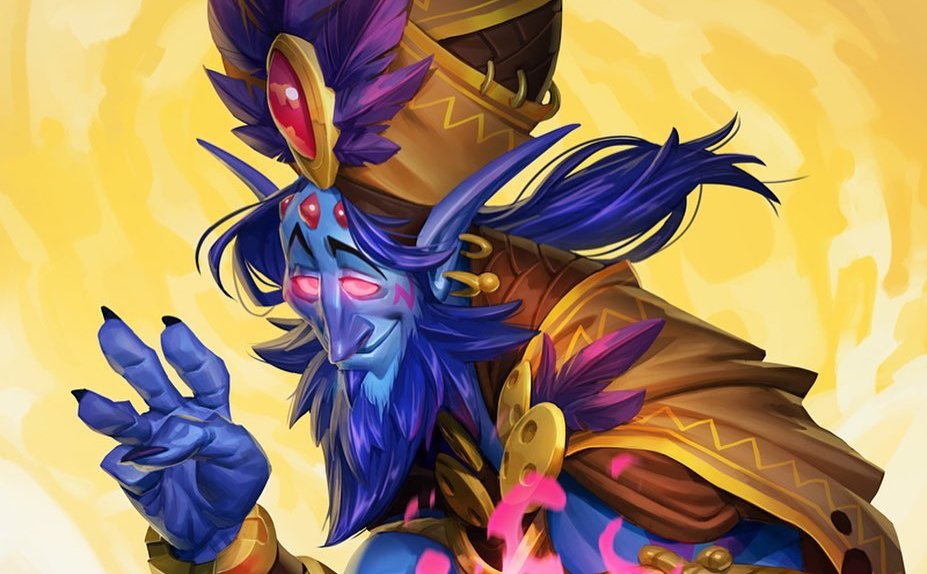 One of the biggest stories of Hearthstone's new Saviors of Uldum expansion has been the addition of Zephrys the Great. He works unlike anything added to Blizzard's card game to this point. He actively analyzes your situation and gives you three choices for how to get out of your situation or how to win outright. It's one of the most sophisitcated displays of in-game AI to date and now Blizzard is making this card even smarter.

Earlier today, Blizzard revealed on the Hearthstoe forums that Zephrys received a special hotfix, one aimed at making an already AI-driven Legendary minion even smarter. Here are the specific interactions that the latest hotfix addressed:

(2) Zephyrs the Great (3/2)
Type: Minion - Elemental
Class: Neutral
Rarity: Legendary
Battlecry: If your deck has no duplicates, wish for the perfect card.

"When we decided to do the Highlander mechanic, we said 'We need to have a cool Highlander card," Hearthstone Senior Game Designer Peter Whalen said during the card's livestream reveal. "We need to have something like Kazakus to get really excited about and you actually want to go and build those decks. And so what could be a neutral that did it? And we said, 'Okay, what if there was a card that said Battlecry: Look Through Your Collection, Add Any Card to Your Hand? Grab a card from your collection? So I went to gameplay engineering, and I went to UI, and said, 'Can we do this?' And they said, 'Please don't.' And so instead, gameplay and UI and a couple of designers brainstormed, 'Is there a version of that we can do? Can we show you a couple of cards from your collection?' Then the idea was, 'What if the AI picked the best ones? Here are some reasonable choices for you.' Then we implemented it five different times, complete reimaginings of how are we going to make it work to find the right version, and this is where we landed. So it looks at all of Basic and Classic, breaks all of the cards into categories, and gives you the best cards out of the categories."

Zephrys has swung many Hearthstone games in just its few days of existence. The game's community hasn't been shy about sharing these experiences, either.

The Hearthstone community will only see more of this bonkers Legendary going forward and there are sure to be some memorable stories that come from it. Shacknews will continue monitoring (and losing to) the exploits of Zephrys the Great. For more on this latest expansion, be sure to keep up with our continuing Saviors of Uldum coverage.