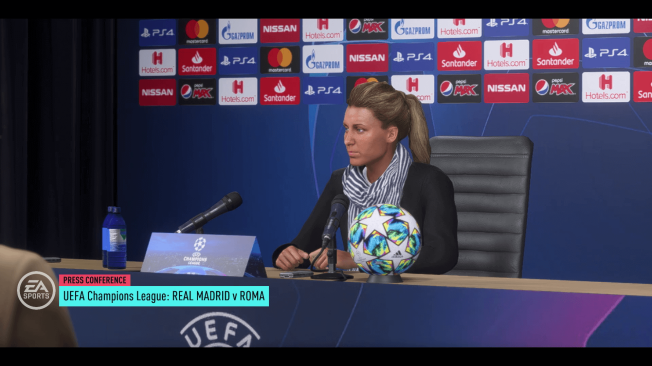 FIFA 20 is getting a few important additions, including one that fans have been requesting for a very long time: the ability to add female managers.

With the upcoming game launching on September 27, EA Sports has announced a series of changes, which will let you alter the body type, clothing, hairstyle, and skin tone of your managers as well. Your coach will also be able to impact your team's morale based on the press conferences they give, your squad rotation, player interactions, and other aspects.

There's also a way you can now disable International management job offers after beginning a new career, in addition to implementing more logos from Premier League, MLS, and a selection of other leagues as you make your way through the game as a virtual manager. These changes may seem insignificant outside of the context of FIFA, but for anyone who's been following the game since these changes were teased, it's a pretty exciting time.

It's been a while since we reviewed a FIFA game here at Shacknews, but when we put FIFA 15 to the test, here's what we thought:

"Players can expect all of the user-friendly game modes and mini games from FIFA’s past, along with new features and vast improvements to some historical weak spots. Ultimately, FIFA 15 succeeds in creating the ultimate experience for fans. Whether you want to manage a club to a Champions League Title, or have a 10 year career with a custom player, FIFA’s got it. FIFA 15 sets a high bar for sports games, and FIFA 16 will need to work twice as hard to clear it next year."

Can't wait to get your hands on the game? It's set to debut on September 27 on Xbox One, PlayStation 4, and PC.