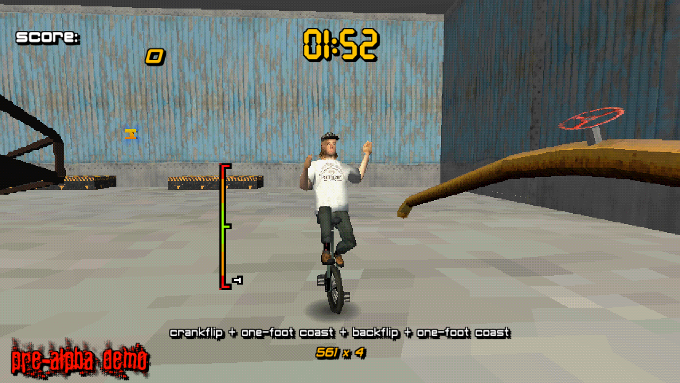 What do you get when you cross street-unicycling with Tony Hawk? You get a little something that looks like Street Uni X, and that means it's awesome.

This intriguing little game is an "homage to the heyday of extreme sports gaming, and an expression of daffodil's passion for street/urban unicycling." So, it's basically Tony Hawk, and you get to do it all on a unicycle. We're in. Sold.

The game includes some of the "top street unicyclists" from around the world and several different tricks many of them employ. To that end, you can expect Noli Ergas, Mimo Needler, and Eli Brill for starters, with additional characters pending for the game.

Everything about this project screams late-90s sports game aesthetic, and it's charming for that reason alone. The game is seeking $31,619 for its Kickstarter goal, and with 8 days left to go, it's currently raised $5,314. It's possible that it could still reach that goal, but even if it doesn't get all the funding it's trying to secure, hopefully we'll see the game come to fruition at some point, because it's pretty rad.

You can try out an early alpha demo for the game now, if you're curious about how it plays. Head on over to the game's Itch.io page to give it a download.