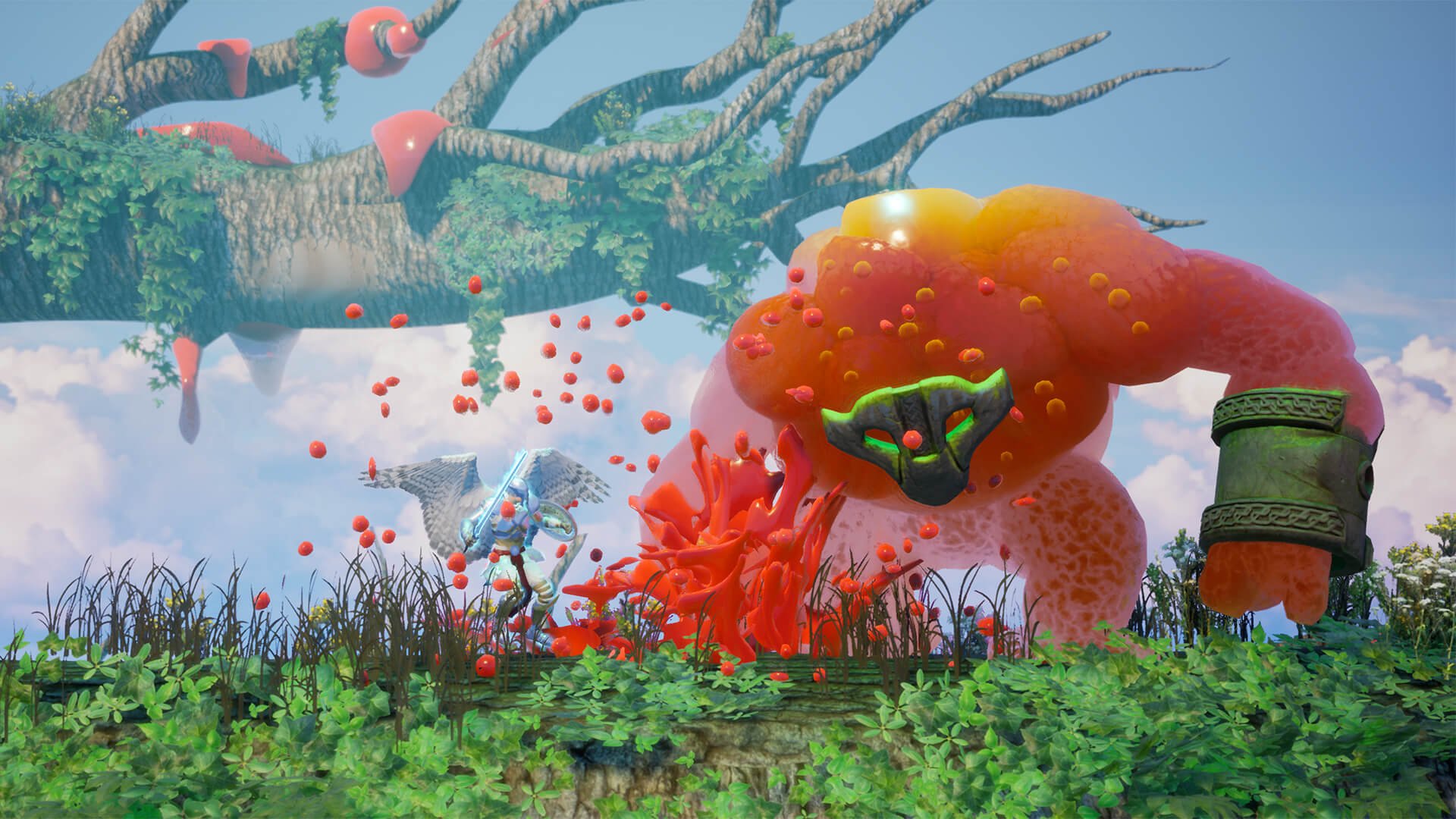 Quintet's oft-overlooked Super Nintendo classic ActRaiser is typically underappreciated. Split between hack-and-slash platforming segments and rudimentary town-building real-time strategy elements, it was an intriguing setup quite unlike anything else on the market at that time.

Spiritual successor SolSeraph combines the same dual-game element system, with platforming and tower defense segments that go hand-in-hand together. It’s a great callback to a classic game, but unfortunately it’s also riddled with clunky platforming elements, lackluster graphics, and a story that won’t hold your attention long enough to want to attend to the humans on Earth in need of your assistance. It’s functional, but is, in a word, bland.

As the godly Helios, Knight of Dawn, you're charged with leading humankind into an age of prosperity like that of before the age of the Younger Gods, who abused humans due to their resentment of humans' ability to tell stories. This hateful treatment resulted in storms, floods, and fires across the land, forcing tribes all across the globe in an effort to survive. As Helios, you can enter both strategy and action modes in an effort to make things right for the unwitting humans who need your help to make it in the cruel world they find themselves in.

At first, the game will throw you into action mode, where Helios will fly down from the heavens in his strong, corporeal form with wings, sword, shield, and bow with magical arrows. You're tasked with clearing out creature lairs here and there throughout the game, which will almost always be capped off with a boss encounter. Eventually, you'll face off against the Younger God of the region you're currently exploring to put an end to the monster invasions for good. There are five regions, each with their own god, so you'll be in for quite a bit of platforming before you can emerge victorious – or get to the better part of the game, where you'll engage in some brisk tower defense rounds.

Unfortunately, SolSeraph's platforming segments are utterly dull and devoid of polish. It's odd to think that Ace Team would start players off with these areas since they're hardly the best the game has to offer. Helios can use a light attack, heavy attack, jump and double jump, dodge, raise his shield, and shoot a limited amount of arrows that will insta-kill lesser enemies. It won't work on all of them, of course, but it's a good way to clear a crowd if you need some ranged attack power.

This all probably sounds rudimentary and fine - and it is – but it's the way you use all these things that's frustrating. Helios can slash through enemies, but it never feels as though you're "truly" connecting with them. Baddies can come riding in on horseback or even fly in from the sides of the screen, and Helios can't change planes to meet them, which is a dated design decision.

Instead, you've got to wait until the monster is in your direct line of sight before you can attack with melee. Frustratingly, your arrows can shoot diagonally or straight in front of you, but positioning them is an insipid affair that should be relegated to the days of retro consoles. It shouldn't be such an annoying concept to aim at a winged insect flying your way, but it is – so much so that I started slashing at them with Helios's sword instead because it was more efficient to jump at them and strike them down that way. To make things worse, Helios turns like a tank, making it difficult to flip around and slash at an enemy that's moved to your six because you were busy charging an attack. It feels like you're controlling a tank, and at times utterly devoid of fun – especially when you're faced with multiple hulking enemies at once. That's when things really feel lackluster.

Defeating more monster settlements will bestow Helios with additional power, so he'll have more at his disposal than you're saddled with at the beginning of the game, but unfortunately that doesn't revise the awful-feeling platform mechanics. Ice powers and flooding don't exactly make things feel any more exciting or less cobbled-together.

SolSeraph's strategy mode is a complete 180 from action mode, and really the only part of the game that you'll want to play for any length of time if you're not impressed by the platforming sections. With that said, it doesn't really break new or exciting ground either, but there's plenty of serviceable, challenging fun to be had there still.

In this mode, Helios can guide each tribe on their way to expanding their territory on the world map further. The camera zooms out, and suddenly it's as if you're playing a completely different game, much like ActRaiser. Working with each region's tribe, you'll have to expand, build fortifications, farms, houses, and other structures to try and improve life on Earth. Instead of messing about with a platformer model of Helios, he's represented by a pair of wings you use as a cursor.

You can build roads to expand your reach, use your powers to make the land fertile and build farms to grow food, build lumber mills by forests to amass wood to build more structures, and even build temples to ward off the oncoming fog that belies monster attacks. Before each wave of enemies hits, you need to make sure you've fortified the area with archer towers, barracks for soldiers, and laid enough traps to keep the baddies from swarming the village. Your villagers will act on their own, but it's your responsibility to make sure you have enough bodies, food, wood, and other supplies to keep them going.

Luckily, if things get too tough, Helios can interfere with deadly lightning strikes and other powers to kill off the enemies that threaten the village. If enough enemies get through, however, and drain all the hearts afforded to you in that particular segment, it's game over. I found these segments to be pleasantly challenging, and much more of an entertaining affair than anything the platforming had to offer. It's unfortunate that you have to play both halves of the game to get the full experience, and more work should absolutely have gone into equalizing their quality.

Flying into the sun

SolSeraph is an interesting riff on the same package ActRaiser introduced years ago, but unfortunately it doesn't go the distance when it comes to replicating the experience players had with the Super Nintendo original. The townsfolk look great when you interact with them, and the town-building elements are pleasant enough, and the voice acting is excellent. But it feels like the game needed a bit more time in the oven, especially when it comes to its half-baked platforming. It could have been a much more exciting game, especially since such a classic lent its inspiration. Unfortunately, it simply can't capture the same magic of ActRaiser. Perhaps it's time for a real sequel instead of a spiritual one.

This review is based on a PC download code provided by the publisher. SolSeraph will be available on July 10.