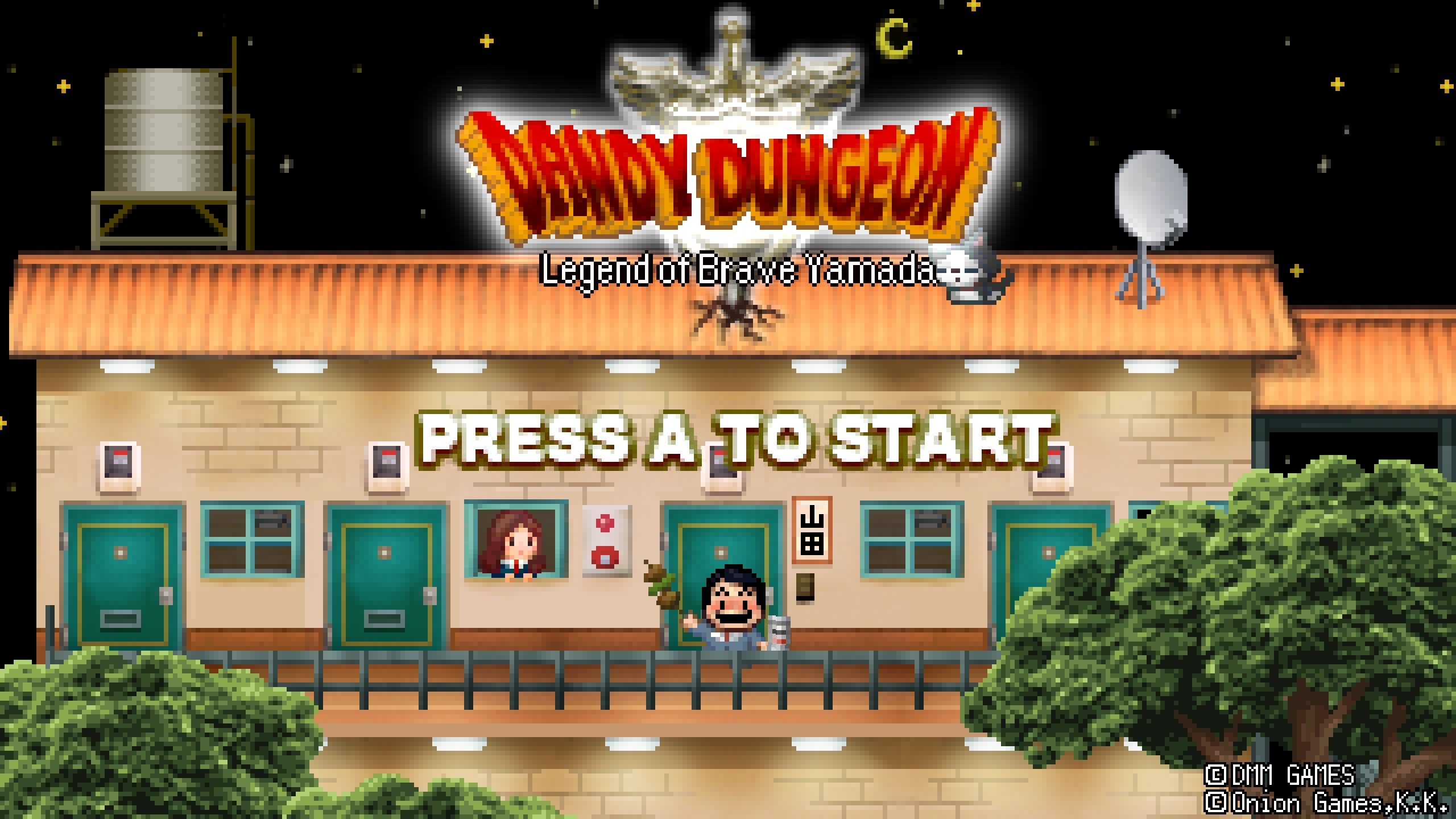 Dandy Dungeon: Legend of Brave Yamada revolves around the life of a middle-aged video game programmer. Yamada-kun has grown tired of his ordinary life and decides to put his skills to use and creates a new game where he’s the star. Originally released in 2017 for mobile devices, service has since been discontinued and the game can no longer be found on app stores. However, Dandy Dungeon: Legend of Brave Yamada has arrived on the Nintendo Switch, giving it a second chance at life.

From the very beginning, Dandy Dungeon shatters the fourth wall. Yamada-kun speaks directly to and addresses the player, and teaches them the controls. Instead of playing as Yamada-kun, you work alongside him and help him out. He adds new features and components to the game and requests that the player tests them out. This is a neat angle for the game to take with its narrative. Instead of a typical formula where the main character speaks aloud to themself, they interact with the player and you cooperate with each other to progress forward.

Early on, Yamada-kun meets a young woman by the name of Maria. He’s immediately infatuated by her good looks and charm. Yamada confesses this love to his friend Yasu and decides the best course of action is to put Maria into his game as a princess. Maybe if he can save her in the game, he can woo her in real life.

I enjoyed the story in Dandy Dungeon much more than I was expecting. Yamada-kun is a regular guy that's not so happy with his current state of living. He decides to take a gamble and follow his passion, hoping to reach a happier life, while finding love on the way. In one way or another, he’s relatable, and it’s easy to root for the everyman. I felt a real sense of happiness as Yamada triumphed and inched closer and closer to the life he desired. This isn’t my story, it’s his. And it was a joy to watch him grow and become more confident throughout his journey.

First day on the job

When the player is play testing Legend of Brave Yamada, the game essentially becomes a dungeon crawler, with RPG and puzzle elements. Yamada-kun’s game sees players descending through a series of dungeons, each floor hosting monsters, puzzles, treasure, and more. Using either the left stick or the touch screen, players must draw a path for Yamada to take from beginning to end. The route can not overlap with itself, and Yamada can not travel backwards. In terms of combat, players don’t actually control Yamada when he takes on the plethora of monsters that can be found in the dungeons. Instead, you must provide him with the best route possible in order to supply him with the tools necessary for success.

This is when I really started to get the appeal of Dandy Dungeon: Legend of Brave Yamada. When planning Yamada-kun’s route through a dungeon, there were several factors I had to consider. I had to make sure that I wasn’t sending him into too many consecutive enemies or else he’d get killed before reaching the end. I needed to strategically maneuver him on a path that would see Yamada stopping at recovery springs in order to regain health. You also have to constantly be wary of any dungeon loot or special items. On top of all that, players must try to cover as many floor tiles as possible, any tiles left uncovered upon reaching the end of the floor will inflict damage on Yamada-kun. Did I mention that Dandy Dungeon times you from the moment you start planning the dungeon route?

Legend of Brave Yamada is no slacker in the RPG department either. As Yamada-kun adds more features to his game, new options open up for the player. Items, armor, weapons, and coins become vital in keeping Yamada in fighting shape. Although you can’t control him, you can choose when to use potions or activate scrolls. Yamada also has different stats that impact moment to moment gameplay such as hp, attack, defense, and speed. During the later missions, I did find myself annoyed by how much exp grinding I had to do in order too keep up with my foes. Some may like this, but I felt as though it took away from Dandy Dungeon's momentum.

All of these elements come together to create a dungeon crawler that is clever, challenging, and rewarding. Not being able to control Yamada in combat is a risky decision, but one that pays off. It forces players to give an extra layer of thought to how they deal with monsters, rather than just relying on brute force to overpower foes.

For a game initially designed for smartphones, Dandy Dungeon: Legend of Brave Yamada plays pretty well on the Nintendo Switch. If you prefer to play as you did on mobile, just pop the Joy-Cons off and Dandy Dungeon can be played entirely using touch screen controls. Or, dock your Switch to play in a way not previously accessible. Thanks to the pixelated art design in Dandy Dungeon, not much graphical integrity is sacrificed when entering TV mode.

Dandy Dungeon: Legend of Brave Yamada tells the story of a middle-aged man stuck at a job he hates. Dissatisfied with his life, he sets out to find true happiness. Yamada-kun’s quest to be greater is endearing, and the creative decision to have players experience it alongside him rather than playing as him, puts an exclamation point on this idea. Having the game on Switch is a pleasant bonus at well, providing a brand new way to play the game. This dungeon crawling RPG builds upon familiar mechanics to craft something fresh and new.

This review is based on a digital key provided by the publisher. Dandy Dungeon: Legend of Brave Yamada is available now on the Nintendo Switch for $24.99