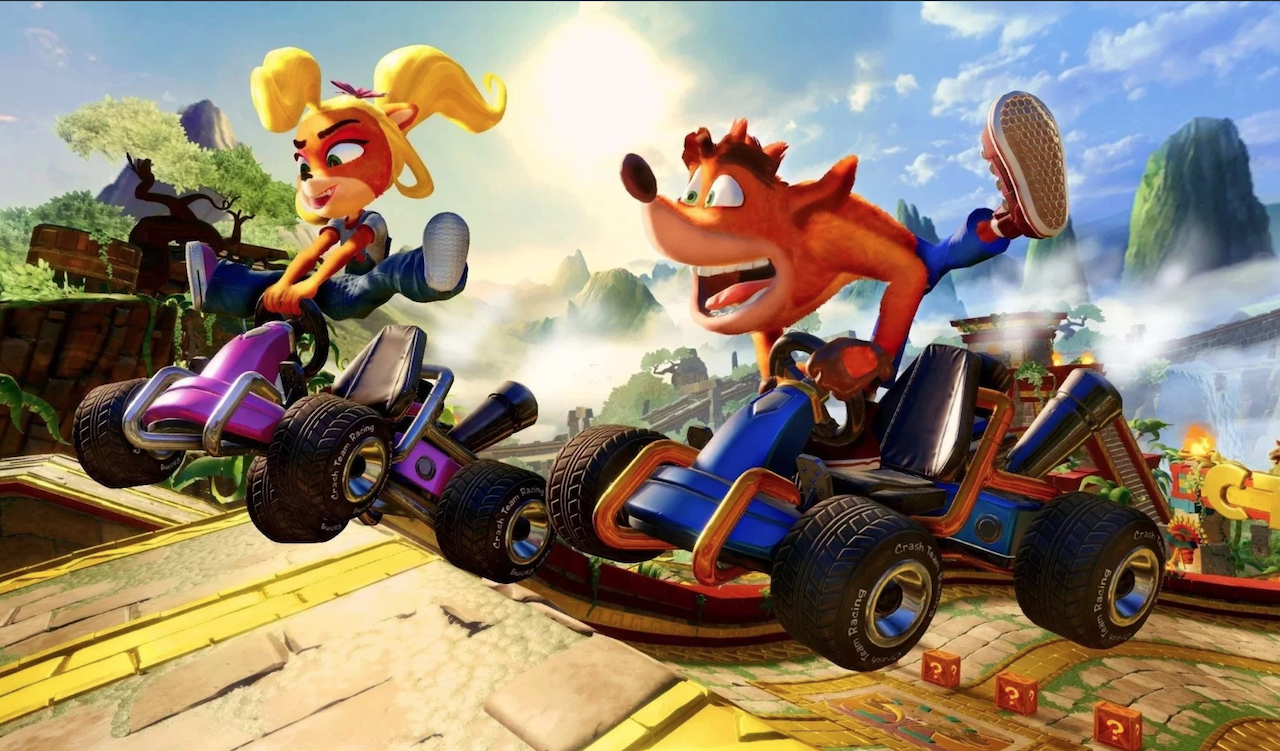 For many, Crash Team Racing was a staple of their childhood. It, along with the legendary Mario Kart, was one of several action-packed kart racers that allowed players to man their battlestations at their couch (or someone else's) on Friday nights after school and host a multiplayer battle royale of pain. You had the classics like GoldenEye 007 and Super Smash Bros. too eventually, but the kart racers really separated the men from the boys and the women from the girls.

While most Crash Bandicoot enthusiasts look back upon his platforming escapades fondly, many tend to forget his misadventures behind the wheel in Crash Team Racing. That's a grave mistake, considering how much fun it was and continues to be. Thankfully, we're in a new age of Crash Bandicoot, and people are digging him again with the introduction of the previous Crash master, the N. Sane Trilogy. Now, Crash Team Racing Nitro-Fueled has hit the track, and it's not just spinning its wheels. It's a challenging, painstaking recreation of the kart racer you likely remember and love, and it's got personality in spades.

Jumping in the driver's seat

In case it wasn't already abundantly clear, this is a Crash Bandicoot-themed kart racer. But it's a lot more than that. It actually has a story that you can play through. One day, Crash and the gang are looking to enter a friendly kart racing tournament, but they're rudely interrupted by an alien named Nitrous Oxide.

He's traveled from the outer reaches of space to pester Earth with a challenge: beat him at a race or he'll turn the planet into a concrete lot. Crash and his friends aren't a bunch of wusses, so that means they've got to team up and complete all the challenges he sets up for them so they can eventually face him in a race. Completing 16 trophies is the way to get at Nitrous Oxide and defeat him once and for all.

That's Adventure Mode in a nutshell, where you can choose one of eight starting racers like Crash, Dr. Neo Cortex, Coco Bandicoot, Polar, or several others to take on Nitrous Oxide's challenges. Completing races in first place will net you a trophy, and collecting all four in each area will get you a boss key to fight the boss. There are four of those too: Ripper Too, Papu Papu, Komodo Joe, and Pinstripe Potoroo.

Once you beat an area boss, you haven't totally completed the area, though. You can still go back for Relics you can unlock after defeating a boss, CTR Tokens hidden throughout stages, and gems. When you win four CTR Tokens that are the same color you can unlock playable characters. Then you've got a few modes outside of Adventure Mode too: Time Trial, Arcade, Vs., and Battle Mode, which are pretty self-explanatory. Time Trial lets you race against the clock for the best time, and Arcade lets you race through a few tracks in a series of random matches with different cups to earn. Vs. and Battle are multiplayer options that you can compete with friends in. There's a massive amount of stuff to do, so the game will keep you busy for quite some time.

Part of what made Crash Team Racing such an addictive success was its near-perfect adherence to the rhythm of hitting turns, power sliding, and boosting around each track. You're probably familiar with the same kind of strategy if you play a lot of Mario Kart, banking into turns and speeding out of them with the boost you receive from drifting. You can chain together power slide boosts and easily overtake the opponent in first place with little difficulty if you know what you're doing, but it takes practice to nail that rhythm.

Beenox has done an excellent job of recapturing this magic in the most important ways. Where the remastered N. Sane Trilogy felt a bit "off" in many ways, Nitro-Fueled feels nearly indistinguishable from the original game's controls. I would know - I went back and compared the two. Getting this down was an important factor that could either make or break the game, and I'm pleased to say Nitro-Fueled feels just as exciting and intuitive as the original that came before it. Whether you're learning how to string together some slick slides to gain ground on those who dare defy you or just casually zooming around the track, you'll undoubtedly be having fun.

On that note, however, there are a few frustrating aspects of Adventure Mode that might bug newbies or casual players. You must claim first place to progress in each race, and getting there can be extremely difficult if you're just starting out. You've got to be willing to put in the practice and employ power sliding, boosting, and other methods if you want to win. Casual racers need not apply unless you want to go through the same race over and over again until you've memorized every twist and turn. This may not matter to some, but for players looking for a simple affair, Adventure Mode may feel like something of a frustrating wall that gates off progress. There's no doubt about it – it can definitely be hard, but even so, it's easily mastered if you practice, too.

This is the Crash Team Racing you remember alright, but with a glossy new coat of paint on it. Developer Beenox did a fantastic job when it comes to making what's old look and feel new again, with colors that pop, character models that remain faithful to the original but still new and exciting, and even more tweaks to the tracks that look and feel exactly like they would have in the '90s had technology permitted.

Along with track updates, there's also the ability to customize your kart with stickers, paint jobs, and other unlockable fun stuff to make it feel more like your own. I opted for a classy PlayStation paint job with the classic face button shapes smack dab on the front of the vehicle and never looked back, though there are plenty of colors to unlock. You can also swap out different skins for each character. I loved playing as Retro Crash, for example, but there were several others to choose from as well that you can open up as you progress through the game.

Crash Team Racing: Nitro-Fueled is another exemplary update for a classic game that desperately needed refreshing after remaining somewhat dormant for several console generations. True, there were other iterations, but this one has always remained the best out of the group. Activision and Beenox did well to make the tweaks they did and otherwise pack this new version of a classic chock-full of reasons to return to the game so many years later. If you're looking for a new (technically old) kart racer to dive into and give your all, this is definitely a great one to add to the pile, especially if you've gotten your fill of all the iterations of Mario Kart.

This review is based on a PlayStation 4 download code provided by the publisher. Crash Team Racing Nitro-Fueled is available now.

Sable review: The journey beyond