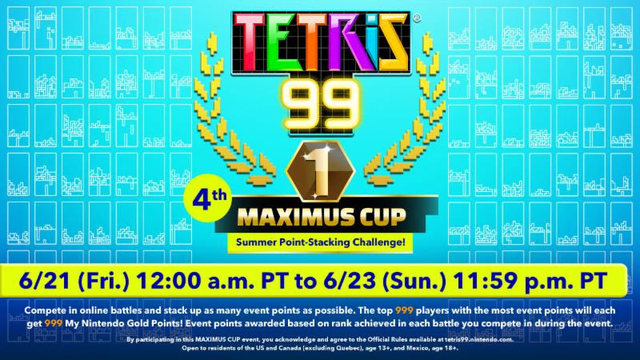 Fancy yourself a decent Tetris 99 player? You'll want to test your skills out in the Tetris 99 Maximum Cup, which is back with its fourth online event.

The fourth Tetris 99 Maximum Cup is back to reward all top 999 skilled players with 999 My Nintendo Gold Points...that is, if they have what it takes. The event will take place on June 21, and will be open to anyone with a Nintendo Switch Online membership. Similar to the previous Maximum Cup, the free event will come back to reward players with points for each match they play while the event is going on, even for those who don't rank in first place.

You'll be playing the online mode that's only available for Nintendo Switch Online members where 99 players compete for first place until there's only one person left standing. A new DLC expansion added two new modes to the game recently, which can be played offline. You'll need the full version of the game to use the DLC, however, which is being sold separately.

The event will kick off on June 21 at 12 AM PT and will take place through June 23 at 11:59 PT. All you need to do to enter is play the Tetris 99 online mode while the contest is going on. The top 999 players who rack up the most event points will get the prized 999 My Nintendo Gold Points, and they can redeem said points for plenty of goodies on the Nintendo Switch eShop.

All you need to do is dominate at Tetrs 99 to come out on top, but that's easier said than done, of course. If you're interested in trying out your skills during the event, be ready when it kicks off and see if you can eliminate the competition. Good luck! In the meantime, check out some of our Tetris 99 tips and strategies to make you a better player.