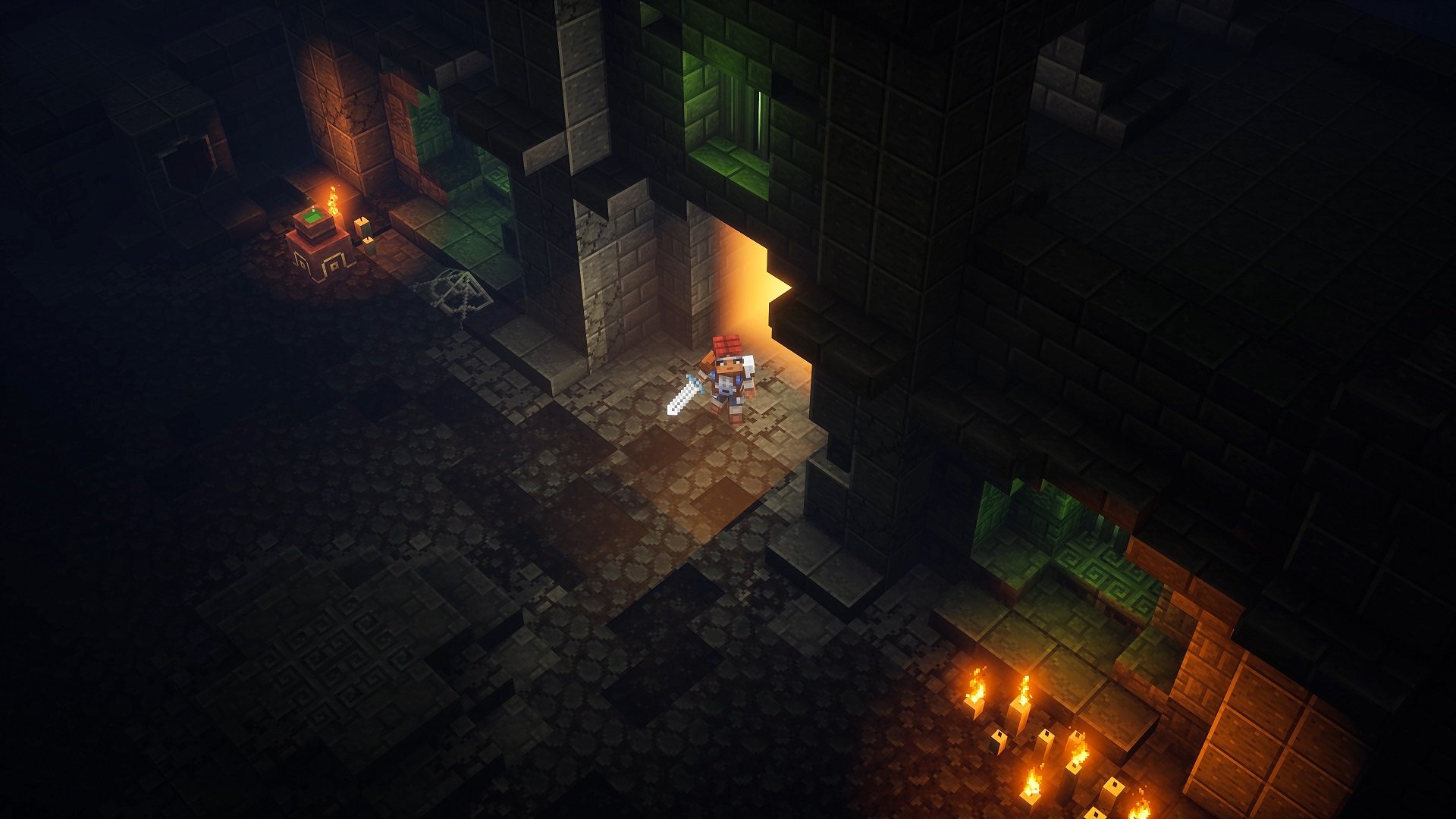 There's a universal appeal to Minecraft and its visual aesthetic, but there's no denying that as a game, it isn't for everyone. Some people may feel they just aren't creative enough to exist in Minecraft's world. Others may not feel enticed by the game's survival elements. But Minecraft Dungeons offers something special. It offers Minecraft to those more adept to a different kind of gaming genre.

Looking at the visuals, the environments, the enemy types, the items, and just getting a sense of the atmosphere, there's no mistaking it. This is indeed Minecraft. It's just Minecraft shaped for a different style of player. Minecraft Dungeons and its premise is as simple as gaming gets. That's not only a good thing, but that makes it one of the best games to grace E3 2019. Shacknews ventured to this year's show to get a first look.

The hands-off demo should look refreshingly familiar to Minecraft users. The player ran through the Desert Temple, a setting found in the original game. However, there are plenty of new elements to find here. That's because all dungeons that players will explore are procedurally generated. Dungeon layouts, enemy mobs, and treasures will be randomized for each playthrough. User maps will be empty to start, but players will uncover more of the area as they explore, in case they need to backtrack.

Minecraft Dungeons very much aims to be a simpler version of the great dungeon crawlers of the past. There's a traditional top-down overhead view, traditional movement, the usual goodies hidden inside breakable pottery, and consumable resources, such as arrows. Each dungeon is filled with the usual assortment of Minecraft enemy mobs, like spiders, Creepers, and skeletons. They also had their share of higher-end foes, like Endermen, which offered a visual static effect on the screen whenever they'd appear. Mini-bosses are also lurking about, with Necromancers summoning mobs out of the aether to attack.

Players are far from defenseless, as they'll have both weapons and player abilities to help them through. Abilities are referred to as artifacts, each tied to a hotkey or controller button. One ability sees players light off fireworks to help with crowd control, while a second one summons a wolf to help ward off enemy mobs. The wolf can also act as a damage sponge, taking punishment to give players the opening they need to attack.

Weapons are not only plentiful, but they're the main source of power in Minecraft Dungeons. There are no individual stats. Players are as powerful as the weapons they carry. All weapons and armor, regardless of rarity, can be enchanted across multiple levels. For example, a rare sword can carry a lightning enchantment, which can chain across multiple enemies. A hammer already does splash damage, but can be equipped with critical hit or stun power. Leveling up will grant users one extra Enchantment Point. While Enchantment Points are limited, it is possible to salvage weapons that have outlived their usefulness. All Enchantment Points are restored whenever the weapon they're attached to is salvaged.

On top of being procedurally generated, Mojang is looking to get creative with some of its dungeon design. Each one is filled with a multitude of traps, as well as puzzles. One such puzzle involves escorting a golden key to clear a path forward. The problem is, the key is a living creature and will often try to run back to its origin point whenever a fight break outs. Mobs will also act as nuisances and try to pick up the key themselves.

There's a lot to get into with Minecraft Dungeons, with more possibilities opening up after finishing the main story. The development team notes that additional difficulty options will be available after completing the narrative. No other endgame details are available just yet, so there's no talk of raids at this time.

But Minecraft Dungeons will be a fun, laid back dungeon crawler for friends to get into. There is drop-in, drop-out local multiplayer, with players also able to jump online with one another. Mojang isn't ready to comment on cross-platform play just yet and it appears to be an item on their to-do list. For now, the only platforms confirmed to play alongside one another are Xbox One and PC.

Those hoping that Minecraft Dungeons will have content well beyond its initial story will be happy to hear that the team will continue to work on the game well beyond its release date. The goal, in fact, appears to be to update the game as regularly as the original Minecraft. The ultimate goal is 1:1 updates with the main game, introducing new biomes and certain new features to Dungeons close to the same time that they're introduced into the main Minecraft game.

Just as Minecraft consumes the lives of the creatively minded, so too does Dungeons look to consume the daily lives of the dungeon crawler fan. There looks to be much to explore and its whimsical design ensures that it'll all be a joy to discover. Minecraft Dungeons is coming to PC, Xbox One, PlayStation 4, and Nintendo Switch in Spring 2020.