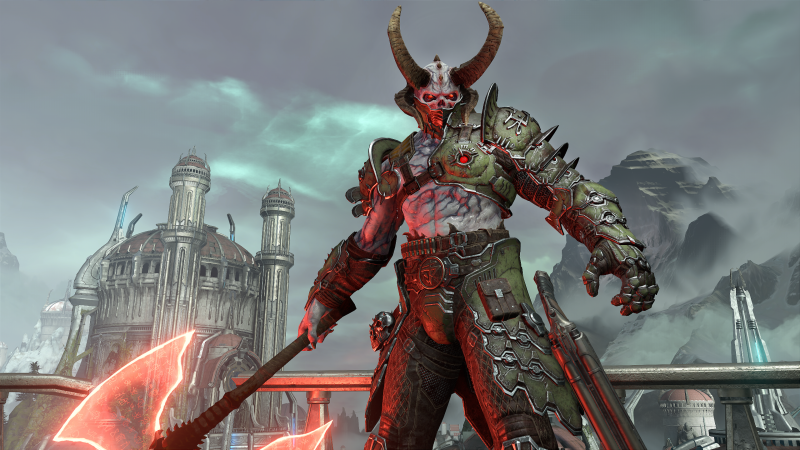 The sequel to Shacknews 2016 GOTY DOOM will hack and slash its way onto consoles and PC later this year. Following Bethesda’s press conference, we got to go hands on with id Software’s new first-person shooter. 2016’s DOOM reboot set the bar high, can its follow up jump and get it?

See you in Hell

The DOOM Slayer is back in all of his epic glory. During Bethesda’s keynote, the developers emphasized how the DOOM series is the ultimate power fantasy. From the very beginning, DOOM: Eternal lives up to this statement. Small touches during the story demo remind player just how imposing DOOM Slayer is. Such as when he grabs a key card while it’s still hanging around the neck of an NPC, dragging him over to unlock the door. Or when a couple soldiers begin to state that you aren’t authorized to be in a particular location, until they realize who they’re talking to. Both guys quiet down and timidly scoot to the side, one even extends his gun out for DOOM Slayer to take. This does a great job at establishing how intimidating DOOM Slayer is to the people and demons around him.

The beginning of the demo gives players a quick crash course on all of the core controls. DOOM slayer is fully equipped with everything he needs to completely wreak havoc on the monsters and demons he encounters. The weapon wheel makes it easy to swap between the assortments of weapons on the fly, rather than cycling through until I get to the gun I need. The built in grenades and flamethrower are of course, epic. Not only are they one of the many ways to take down foes, but they also provide special bonuses in combat. For example, burning enemies with the flamethrower will cause them to drop shields. In fact, there are a few weapons that have their own bonuses if you use them when taking down demons. Take the chainsaw, for example. This classic weapon makes its return in DOOM: Eternal. This close quarters melee weapon is an easier way to finish off stronger foes. Enemies killed by the chainsaw will drop ammunition upon death. The only catch is that players must have fuel to keep the chainsaw running.

There were several instances during my demo where I was low on ammo, and had to quickly adapt and find another way to get myself out of trouble. Although id Software wants you to always feel like the most powerful being in the universe, they make sure you constantly feel under pressure. You’ll constantly be low on resources, forcing you to try different weapons and play styles.

Always on the move

Mobility has always been a staple of DOOM’s gameplay. Being one of the most chaotic shooters out there, levels in DOOM are usually riddled with enemies swarming and attacking from all angles. Because of this, it’s vital that players are constantly moving as they fight. Standing still while trying to pick monsters off is a surefire way to get yourself killed. DOOM Eternal does a superb job at continuing this idea. The levels played in the demo are designed in such a way that they almost feel like platformers. You hop from platform to platform, firing at enemies while keeping yourself from being an easy target. The double jump and new dashing abilities also work to support this system.

All of these elements come together to create a wonderful sense of fluidity when fighting in DOOM: Eternal. Fighting hordes of hellspawn almost feel like dancing. Rhythmically wading through baddies while launching grenades, blasting flames, and launching from wall to wall is a pure joy. DOOM: Eternal is as brutal and violent as ever, and the glory kills are back yet again to deliver some satisfying deaths for enemies. When an opponent's health is low enough, they will flash blue and yellow to signal they can be glory killed. Triggering the glory kill will cause the DOOM Slayer to finish off a demon in the most violent ways possible. Smashing heads, ripping out body parts, and making demons swallow their own eyeballs is oddly cathartic.

All in all, I can’t say I’ve ever been more excited at the thought of going to Hell. DOOM: Eternal feels like a nonstop thrill ride that smartly builds on the game that came before it, without doing too much. It’s not a new formula by any means, but it’s the one that’s proven over and over to be superior. I look forward to fully stepping into this power fantasy when DOOM: Eternal launches on PS4, Xbox One, Nintendo Switch, and PC on November 22.