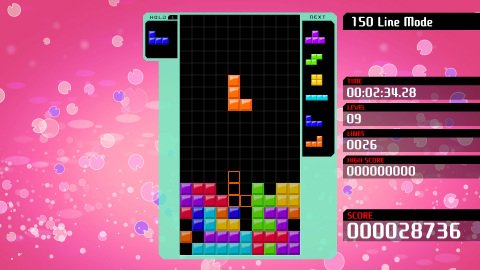 Tetris 99 is the video game gift that keeps on giving. Nintendo has announced that a new Big Block DLC is coming to the game today. The Big N is also holding the third MAXIMUS CUP online event.

The Big Block DLC costs $9.99 in a one-time purchase. The DLC comes with CPU Battle where players can square off against 98 CPU opponents. Marathon mode is also being added for players who just want to clear the most lines possible without being attacked in the battle royale. Nintendo says that information about additional updates will follow at a later date.

The next MAXIMUS CUP kicks off on May 17 for Nintendo Switch Online subscribers. Any participants who earn 100 event points by the end of the event will unlock a sweet in-game theme inspired by Game Boy. The event will kick off on May 17 at 12:00 AM PT and ends on May 19 at 11:59 PM PT. Head over to the official Tetris 99 website to find out more about the MAXIMUS CUP.

Sadly, there is no word on another song being added to the game. Tetris 99 players are also interested in new modes inspired by the Battle Royale genre like duos or squads. It would be cool to jump into the fray with friends in the game.

Tetris 99 already requires a Nintendo Switch online membership, so it is kind of weird for a game tied to a service to sell DLC. This is the world we live in, and the Big Block DLC sounds pretty dang awesome. I know that I will have no problem ponying up the $9.99 for a game that I have been playing almost everyday since its launch. If you have a Switch Online subscription, and haven't tried it out yet, check out our Tetris 99 strategy guide.