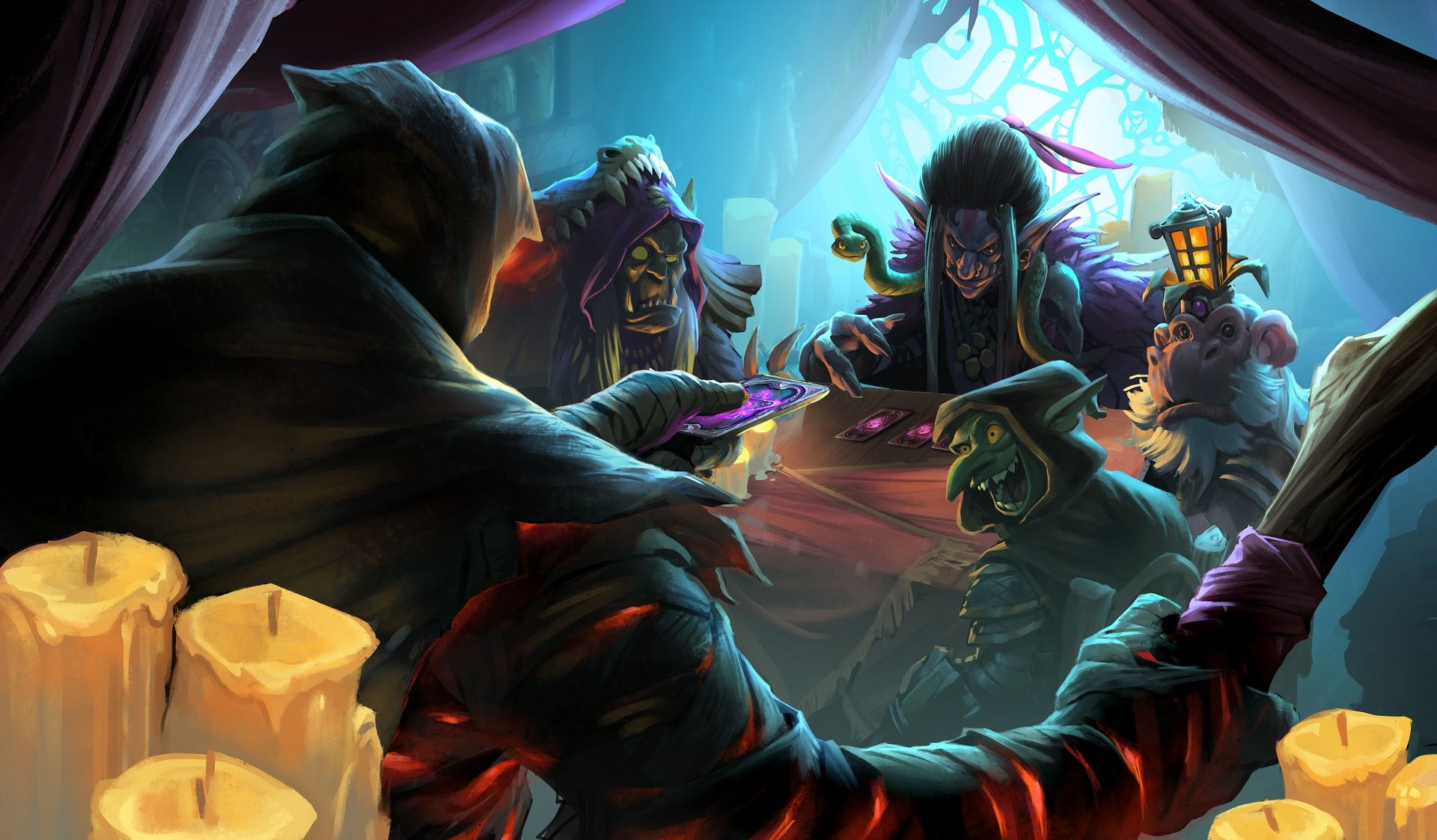 Rise of Shadows is Hearthstone's first expansion of 2019

For the past few weeks, Blizzard has been rolling out teasers for Hearthstone's first expansion of 2019. Fans have been re-introduced to some familiar faces, specifically the villains that they've encountered in the collectible card game throughout its five-year history. For the first expansion of the new Standard year, a group of those villains are now banding together and forming a new evil tandem. This is the story behind Hearthstone: Rise of Shadow, the new expansion set to release in April.

Hearthstone: Rise of Shadows plays off of the numerous teasers from the past week. Arch-Thief Rafaam, last seen in the League of Explorers adventure, has summoned a team of villains from expansions past. They are wicked fortune teller Madam Lazul (Whispers of the Old Gods), greedy monarch King Togwaggle (Kobolds & Catacombs), swamp-dwelling sorceress Hagatha the Witch (The Witchwood), and the maniacal Dr. Boom (The Boomsday Project). Together, they are the League of E.V.I.L. and they have sinister intentions for Azeroth, starting with Dalaran.

As one would guess, given the cast of characters, Rise of Shadows will feature a number of cards with some callback mechanics. Let's take a look at one of them:

(0) Forbidden Words
Type: Spell
Class: Priest
Rarity: Rare
Spend all your Mana. Destroy a minion that much Attack or less.

Veteran players may recognize the Forbidden mechanic from Whispers of the Old Gods. They were seen in cards like Forbidden Shaping and Forbidden Healing. Here's another throwback mechanic:

This is a return to the old Golden Monkey mechanic from Rafaam's old League of Explorers set. As Rafaam's presence here may imply, each of the villains is set to represent a specific Hearthstone class. Rafaam will be the Warlock, Madam Lazul will work as the Priest, King Togwaggle will act as the Rogue, and Hagatha and Dr. Boom will reprise their previous roles as Shaman and Warrior, respectively. But doesn't that leave four classes that aren't represented? Blizzard is indicating that these blanks will be filled soon, teasing a heroic group called the Defenders of Dalaran. More details are expected soon.

As far as new card mechanics go, Rise of Shadows will offer plenty of those, too. With evil villains must come underlings, so say hello to Lackeys. These are 1-Cost 1/1 minions with various Battlecries that are generated by other minion effects. Along with Lackeys come Schemes, which are spells that grow in power with every turn. That means they can be used on their first turn for minimal power or later in the game for power overwhelming. Let's look at an example of a Scheme:

Classes that don't utilize Schemes can take advantage of the new Twinspell mechanic. As its name implies, this spell is usable once, after which a second copy is placed in the user's hand. Let's look at an example:

Rise of Shadows marks the first expansion to release under the Year of the Dragon. This will usher in the official start of the new Hearthstone Standard year, with the Journey to Un'Goro, Knights of the Frozen Throne, and Kobolds & Catacombs sets rotating to Wild. The new Hall of Fame class will also rotate out into Wild.

One last item to note is that while Blizzard has released details on the new expansion and revealed a few cards, there are still no solid details on the PvE Solo Adventures that the previous week's teasers have seemingly alluded to. Blizzard has stated that it will reveal more information on the next Solo Adventure, which will further the story of the League of E.V.I.L. at a later date. The only knowns right now is that it will be a more robust PvE experience, with greater rewards, and include a return to the old Solo Adventure pricing model of $19.99 for the set or 700 Gold for each wing.

Expect card reveals for Rise of Shadows to begin in earnest soon. The latest Hearthstone expansion is set to release on April 9. Pre-orders are open now. Players can pick up 50 card packs, a random Legendary, and the Jewel of Lazul card back for $49.99 or pick up 80 card packs with a random Golden Legendary, the Jewel of Lazul card back, and new Priest Hero Madam Lazul for $79.99.

Blizzard has also revealed a few more cards for this set, so stay tuned to Shacknews. We'll offer analysis on these cards later today.