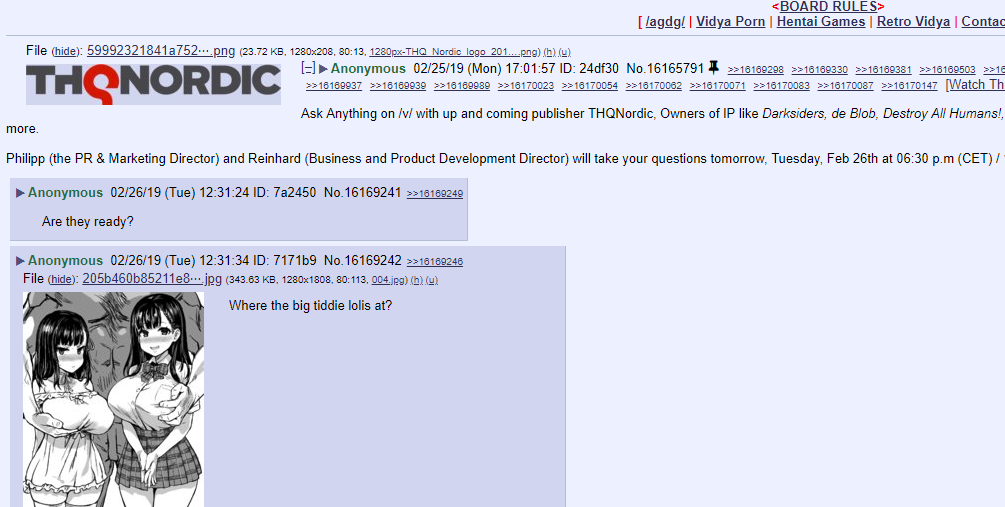 THQ Nordic has made a very stupid PR blunder today. The company is doing an AMA on 8chan. The website has been blacklisted by Google for child abuse content. It is also a well known haven for swatting, transphobia, homophobia, conspiracy theories, racism, antisemitism, and pretty much everything awful in the world. For a video game company to even acknowledge this dark and evil corner of the Internet is upsetting.

We're doing an 8chan AMA and we have no idea why. Come join us!https://t.co/i2okKUfpdP

The Shack staff internally debated even reporting on this as it just draws more attention to the AMA, but I feel like this is a moment to point out a corporation's massive error in judgement. This is not a news post, and I will be sharing my opinion along with other people in the games industry's reaction to THQ Nordic's bafflingly stupid decision.

This AMA is such a terrible decision that it has to be consciously bad and not a "gaffe."

In 2014, GamerGaters took their posts to 8chan when 4chan banned discussion of the "crusade for ethics in games journalism." The site was also blacklisted from Google search in 2015 for containing "suspected child abuse content." The Washington Post described 8chan as a "more-lawless, more-libertarian, more 'free' follow-up to 4chan." The site was created by Fredrick Brennan in 2013, and is a fine example of what happens when free speech trumps moderation.

the opportunity was here and we took it, we got apporached in a very friendly and polite manner and were assured, said person (shoutout to Mark) will take care of the nasty stuff. so, here we are.

The decision to participate in an AMA on 8chan wasn't slipped by PR either, as the PR and Marketing Director as well as Business and Product Development Director are the two representatives from THQ Nordic hanging out in one of the worst places on the Internet. They even doubled down on the decision on Twitter. This is really unfortunate, as the company had been on a tear of acquisitions lately on the back of some financial success. There are a ton of people who work at the company who are probably very upset by this AMA.

So @THQNordic has decided to host an AMA on, uh, 8chan - the site blacklisted from Google for child abuse content.

8chan is well-regarded as an alt-right site and a base for swatting.

(What the fuck are you doing, guys?) pic.twitter.com/wQ5E5ZoRze

Ryan Brown voiced an opinion that sums up the confusion from a lot of people today. A simple Google search could have prevented this massive PR fiasco. THQ Nordic has yet to apologize to their fans who are vocally upset with their decision to participate in a 8chan AMA, but we will be sure to update this article when their inevitable mea culpa arrives.

"I personally agreed to this AMA without doing my proper due diligence to understand the history and the controversy of the site. I do not condone child pornography, white supremacy, or racism in any shape or form. I am terribly sorry for the short-sightedness of my decision, and promise to be far more vigorous in my assessment of these activities in the future. This was not about being edgy, this blew up and I very much regret to have done it in the first place."

It will be interesting to see just how long Phillip Brock has a job at THQ Nordic after this PR disaster.

We will never see a crossover like Super Smash Bros. Ultimate again