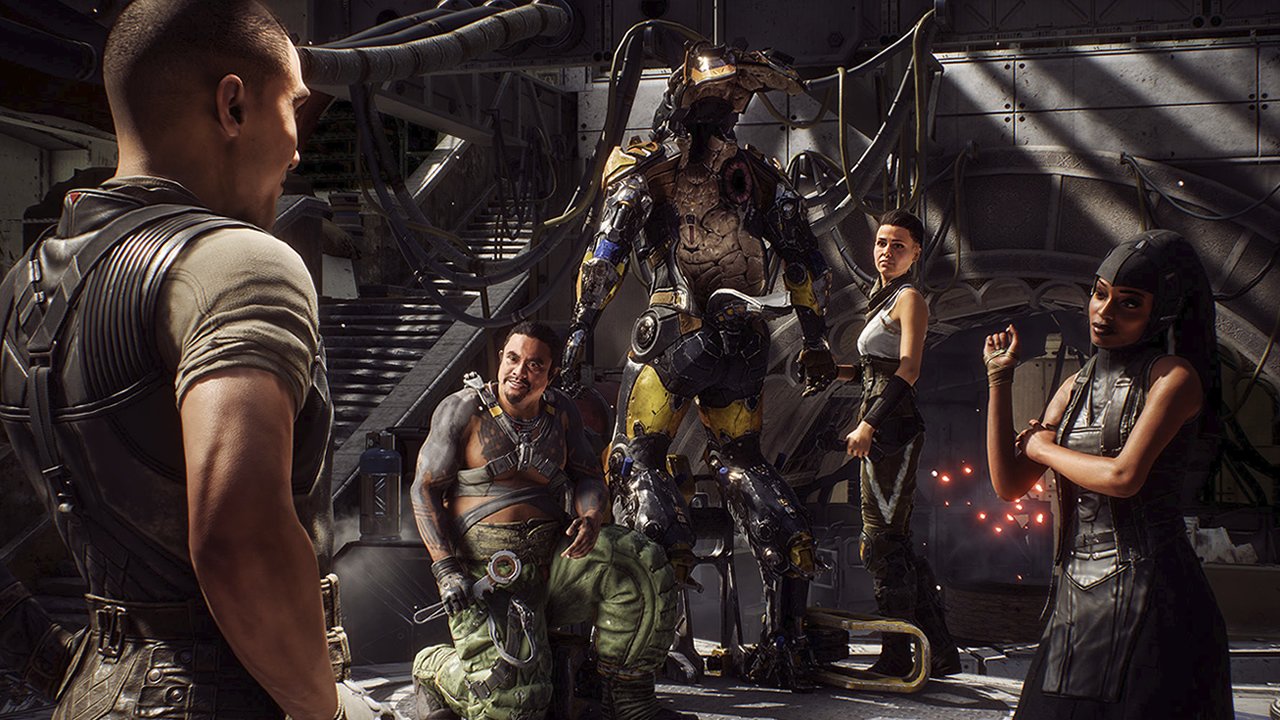 BioWare has lofty ambitions for its sci-fi game Anthem, and part of realizing that plan involved bringing together a group of highly talented voice actors. As is often the case, many of the voice actors in Anthem will be familiar to dedicated gamers. However, there are a few stars players might not recognize unless they're particularly well-versed in film and television personalities. Read on to discover some of the most prolific and recognizable voice actors in Anthem.

The voice actor for Anthem's female protagonist is Sarah Elmaleh, an established voice acting talent with video game credits dating back to 2011. Aside from voicing Anthem's female lead, she also voiced Katie in Gone Home, The Raider in For Honor, and Rose in Where the Water Tastes Like Wine. Outside of games, Elmaleh appeared in the short film A Star Close to Home as well as one episode of TV series Mike & Molly.

The male protagonist in Anthem is voiced by New Jersey native actor Ray Chase. Not only has Chase starred in a number of films and TV series, his earliest video game voice acting credit dates back to 2004 with the release of World of Warcraft. Since then Chase has voiced characters in games like Star Wars: The Old Republic, Killer Instinct 2013, Hearthstone, Ace Combat Infinity, Battlefield 1, World of Final Fantasy, and over 50 other releases. He's also slated to voice Gebel in Bloodstained: Ritual of the Night.

The voice of Haluk in Anthem is provided by Lebanese-American actor Nick E. Tarabay, a star known for several recurring television roles in series like The Sopranos, Crash, Spartacus, Believe, Longmire, and The Expanse, among others. He's also appeared in films Star Trek Into Darkness, The Veil, and Pacific Rim: Uprising. Anthem is his first video game credit.

Faye in Anthem is voiced by up-and-coming actor Rochelle Neil. Known for her work in short films like Love & War, The Guvnors, Gracie, and Nika, Neil broke into the television industry with a role on Genie in the House back in 2006. Since then, she's been featured in Death in Paradise, Doctors, Episodes, and Law & Order: UK. Like with Tarabay above, Anthem is Neil's first video game credit.

Anthem's Owen Corley is voiced by London-borne actor T.J. Ramini, who is primarily known for his work in TV series such as 24, Twisted, and The Bill. Ramini's earliest listed credits date back to 1996 with a role in romantic comedy Dating the Enemy, and from there he would go on to star in films like Spivs, Batman Begins, Get Lucky, and Postman Pat. He broke into the world of video games with Uncharted 3: Drake's Deception in 2011, and has since starred in titles like Diablo 3, Dota 2, Bayonetta 2, and Star Wars: Battlefront 2.

The recognizable voice of Anthem's Ryssa Brin belongs to California native actor Amy Okuda, whom many fans will likely recognize from her role playing Tinkerballa in popular web series The Guild. Okuda has starred in several TV series including BFFs, Californication, Brooklyn Nine-Nine, The Man in the High Castle, and How to Get Away With Murder, plus appeared in films such as Chastity Bites, The Wedding Ringer, and Hello, My Name Is Doris. Anthem marks her very first video game credit.

The voice of Tassyn in Anthem is that of Missouri-born actor Annie Wersching, another star from hit show 24 that TV fans may recognize from her work in series like General Hospital, Dallas, Extant, The Vampire Diaries, Bosch, Timeless, and Runaways. Outside of television, she's also starred in films such as Bruce Almighty and short The Showdown. Aside from Anthem, Wesching's only other video game credit is for providing the voice of Tess in 2013 Naughty Dog release The Last of Us.

Anthem's resident bad guy The Monitor is voiced by Anthony Howell, a classically-trained English actor whose film, TV, and video game credits reach back to 1999. Primarily known for his roles in series like Wives and Daughters, Foyle's War, and Luther, Howell can also be seen in films such as Woman in Gold and short The World Turned Upside Down. Howell's earliest video game credit is on World of Warcraft in 2004, and he's since lent his talents to other games like Aliens: Isolation, Dragon Age: Inquisition, Soma, Battlefield 1, Horizon Zero Dawn, Vampyr, and more recently Thronebreaker: The Witcher Tales.

The voice of Neeson in Anthem is provided by Joe Lo Truglio, an actor and comedian players may recognize in the role of Charles Boyle on TV series Brooklyn Nine-Nine. Truglio has a long acting history with credits dating back to 1992, and film fans may recognize him from roles in movies like Wet Hot American Summer, Superbad, Pineapple Express, Paul, and Role Models. Aside from Anthem, Truglio has three other video game acting credits, including voice work in The Warriors, Grand Theft Auto: San Andreas, and Grand Theft Auto: Liberty City Stories.

Like with many BioWare releases before it, a big part of Anthem's dramatic impact boils down to its team of voice actors and performance capture artists. To learn more about other top-tier acting talents in the industry, be sure to stop by Shacknews' voice actors home page. Beyond that, action RPG fans can stay on top of BioWare's latest release by heading over to our Anthem game guide and walkthrough.