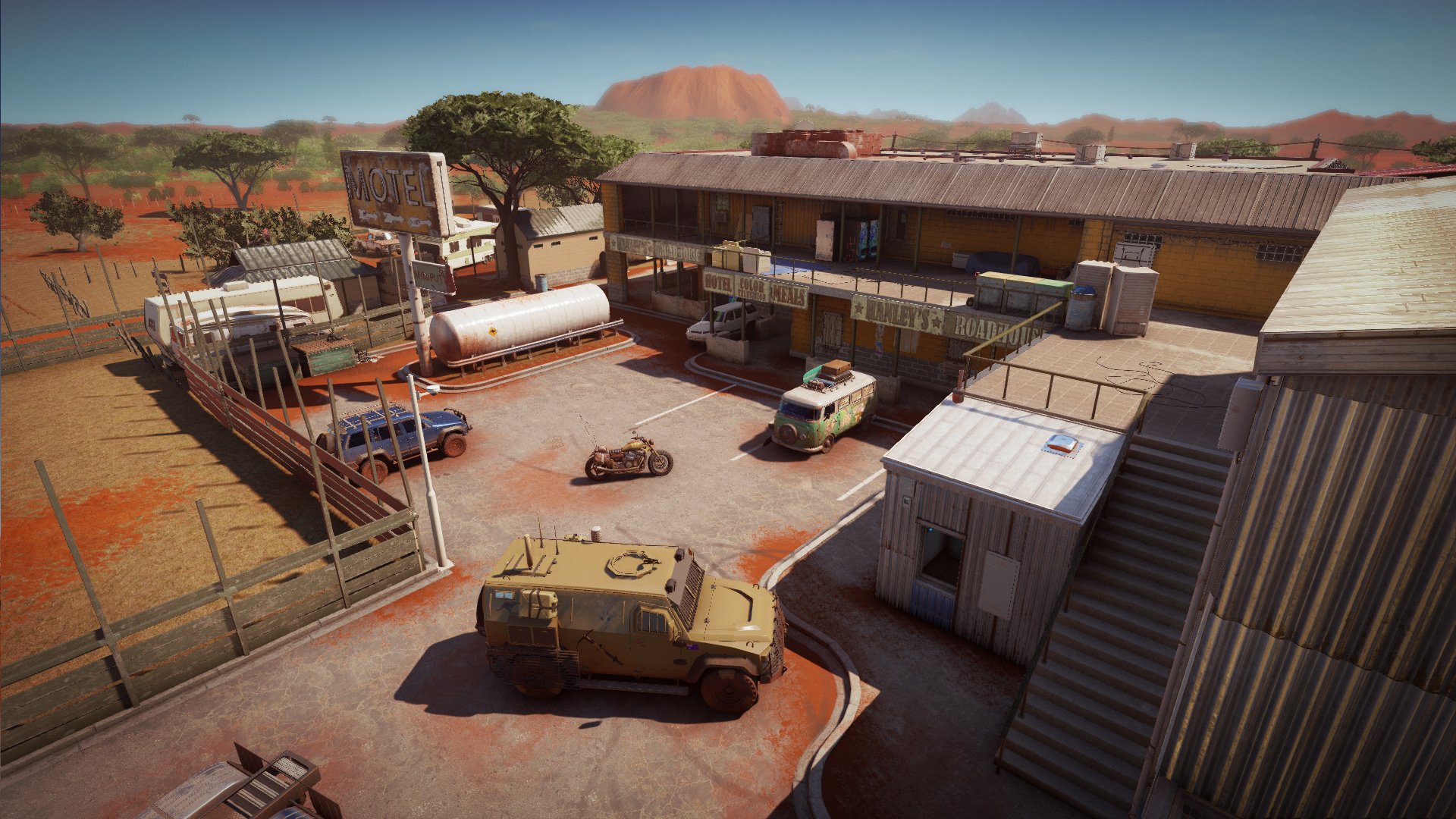 Tom Clancy's Rainbow Six Siege has been in the business of tactical shooting for the past several years and business has never been better. Ubisoft's shooter continues to hit new peaks for the series, both in terms of sales, player quantity, and game quality. But the publisher isn't done updating the game just yet. There's still more coming in Year 4 and Ubisoft revealed what's next on Sunday.

Revealed in full earlier today during the Six Invitational, Twitch viewers got a live look at Operation Burnt Horizon, which will take Rainbow Six Siege to a new frontier: Australia. Not only are there two new Australian Operators, but teams will actively conduct operations in the Outback. Shacknews was among those who got to check out the next big Year 4 content update, as we got to go hands-on with Operation Burnt Horizon.

The Outback map is one of the most easily identifiable locations in Rainbow Six Siege to date. It's separated out into three distinct sections: there's the outdoor hotel, the restaurant, and the garage. Each of these sections are color-coded and has their own distinct landmarks, making it easy for teammates to communicate and call out to one another. I found enough points like the mechanical bull that I was able to recognize the layout after a couple of playthroughs. It's best to grasp the interior, because busting through the ceiling or the windows isn't as seamless as one would expect. The ceiling, in particular, was surprisingly tough to bust through, considering it's a dilapidated motel.

The Outback continues pushing forward one of the best features of Rainbow Six Siege. Maps have chokepoints to a certain extent. On paper, there are areas where it's easy to catch offensive teams coming up, like a couple of staircases or a few hallways. But teams on defense must also recognize that the offense can make a new path forward at any time. While our defensive squads were able to hold the hostage inside the laundry room with no trouble, we were occasionally caught off-guard by attacking teams that breached through nearby walls, creating an entirely new front.

One of the easiest new ways to get a grasp on the attacking team's machinations is to turn their own drones against them. That's the idea behind new defender Mozzie. Mozzie has a specialty pistol, called the Pest Launcher, that can take control of offensive drones during the opening surveillance phase. Now under Mozzie's control, the drone can be turned around and used to spot attacking player positions. Mozzie can then ping their positions to his teammates or even attack them with a taser, catching attackers mostly unaware. "Mostly," because IQ still has her Spectre gadget, which can jam those drones.

The trouble with Mozzie's ability is that it doesn't quite work with trigger-happy teammates. There were more than a couple of occasions where I took over an enemy drone and proudly drove it in the middle of my team, where they then proceeded to pump it full of bullets. Needless to say, better communication is key for teams who want to succeed with Mozzie.

The other new Operator is an interesting new attacker named Gridlock. What makes her unique is that her ability feels like it's more designed for defenders. Gridlock brings along a gadget called Trax Stingers, which is essentially a spike trap that replicates itself in a honeycomb cluster pattern, encasing a full area. These spikes will do 10 damage a piece, but despite their look and their design, they're not meant to act as a trap. They're meant to act as a deterrent.

I got plenty of work with Gridlock, where the plan was to lay out the Trax Stingers in order to essentially remove an area from play for the defenders. Attackers will not be harmed by the Trax Stingers, so they can run all over them and close in on the defenders' locations. Gridlock can also combo this play with a smoke grenade, which can make defenders stumble straight into the spiky floor. Trax Stingers can be removed by firearms and grenades after they've already been deployed, but if defenders can remove the central device, it can stop the Stingers in their tracks before they cover anymore ground. But any defenders who use these loud methods will give their positions away, so they'll need to be careful.

Operation Burnt Horizon offers up a unique Australian flavor with its map and its two Operators. Gridlock and Mozzie take on some roles that would be typically associated with the opposing side, offering some enticing new options for both Attackers and Defenders. Year 4 continues to make Rainbow Six Siege a more interesting experience. Look for the Operation Burnt Horizon content to hit the Rainbow Six Siege Test Server this Monday, while it hits the full game on all platforms soon.