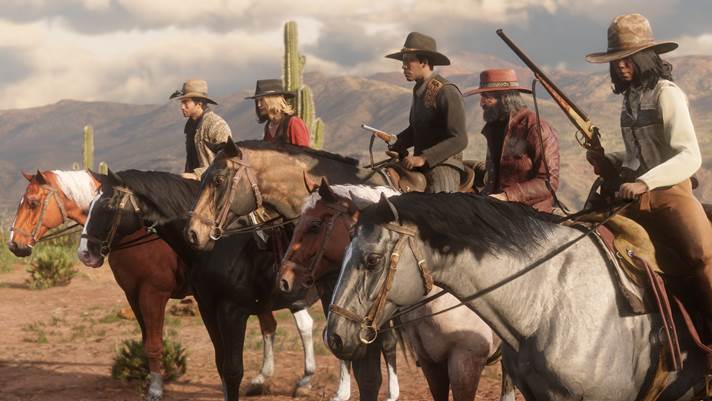 If you're poking around in Red Dead Online's beta period right now, you'll want to stay tuned for a fresh set of updates you won't want to miss.

Red Dead Online will be adding a new Law and Bounty system, weapons balancing, player blip changes on the mini map, and more when February 26 rolls around. It's time to saddle up, partner. Yee-haw!

In terms of bounties, players with high bounties run the risk of being chased down by NPC bounty hunters looking to kill them and take their reward. Different types of criminal behavior will have different consequences and bounty values, based on how severe your crime was. If you assault townsfolk or animals and get reported, you might get a lesser bounty than if you straight up murdered another player. Looting and stealing items will only lower your honor. If your bounty goes over the threshold and Bounty Hunters jump on the case, you'll be wanted dead (not "dead or alive," just dead) and they'll track you down to kill you.

There will also be a new selection of Daily Challenges that you can make on during the beta. You can complete various objectives to earn Gold Nuggets and XP, doing things like foraging for herbs and selling them, winning Deus, clearing out hideouts, and other activities. You'll see them grow and change over time, and you'll be able to earn streak bonuses and other useful things.

Player blips will be altered as part of the devs' respond to continued community feedback on how to minimize "destructive player behavior." Unless you're within 150 meters of other players, your map position won't be shown to others. If you're a bit further away, you'll only show up on the radar when you fire your weapon. You won't be able to see other players in other town, for instance, and this will help solve the problem of being targeted from lengthy distances.

There's a whole host of other fixes coming with the update, and Rockstar Games will have more to share on that end when it hits next week. In the meantime, you can earn additional XP to rank up ahead of February 26, so check out Free Roam Missions and Free Roam Events while playing with a Posse to rack up all kinds of extra goodies before the update debuts.

See you out there in Red Dead Online!