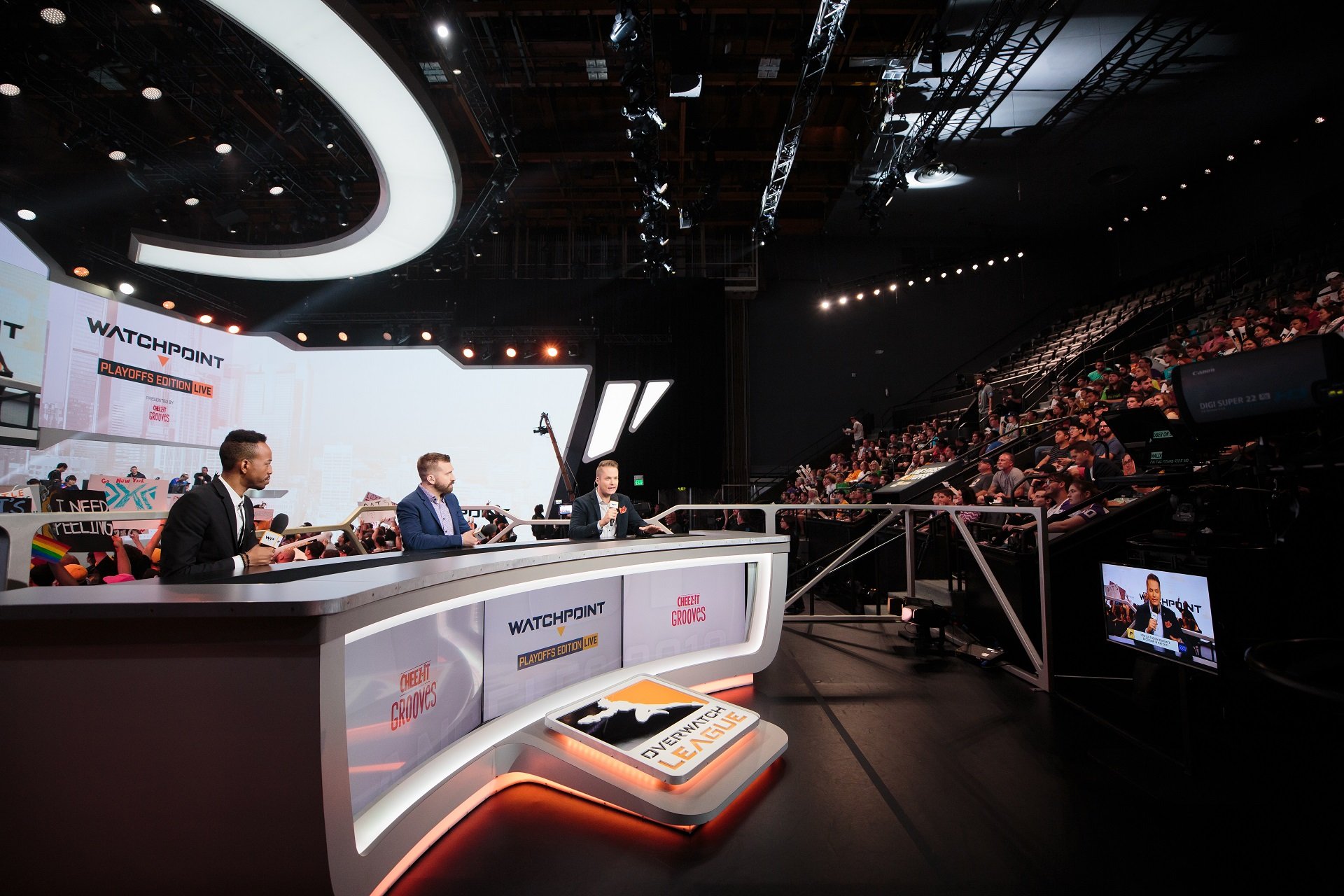 The Overwatch League returns for its second season this week. Quite a bit has changed since the London Spitfire won the league's first championship back in July. Overwatch has added new maps, new characters, and has undergone a slew of balance patches. And while the spirit of the Overwatch League remains the same, much of it is going to feel different.

The first game is set to kick off this Thursday, as the league returns to a packed house at the Blizzard Arena in Burbank, CA. Today, Shacknews is taking a look at a handful of storylines to keep an eye on through the first week and beyond.

Can the London Spitfire maintain their momentum with a new coach?

The London Spitfire had little trouble winning the Overwatch League championship in July. One would never have guessed that the team had parted ways with their head coach in mid-season. But that was indeed the case, as the Spitfire had split with former head coach Beom-joon "Bishop" Lee back in March. The Spitfire rallied around their remaining coaching staff, including Chang-geun "Changg" Park, to make history by winning that first championship. Park has since left the team to join the Seoul Dynasty.

The Spitfire's coaching situation is now fully stabilized, with the team playing under legendary StarCraft/Heroes of the Storm coach KwangBok "Coach815" Kim. Kim's accolades precede him and if anyone can handle taking over a defending champion team, it's going to be him. But the defending Overwatch League champions will enter the season under heavy pressure to keep their success going, especially since most of the championship roster is returning intact. Jaehui "Gesture" Hong, Ji Hyeok "Birdring" Kim, and Junyoung "Profit" Park remain among the top players in the world. With a full league gunning for them and what they have, can the Spitfire keep up their winning ways?

Their first big test will come in the season opener, as they face off in a finals rematch against the Philadelphia Fusion. The Fusion are also bringing their roster back mostly intact, along with 18-year-old breakout two-way phenom Simon "snillo" Ekstrom, who comes into the season with heightened expectations.

Which of the new expansion teams will make the most noise?

The biggest change to the Overwatch League's second season is the addition of eight new expansion teams. With the Atlanta Reign, Chengdu Hunters, Guangzhou Charge, Hangzhou Spark, Paris Eternal, Toronto Defiant, Vancouver Titans, and Washington Justice all making their debuts this season, it's never too early to wonder which of these squads has the best chance to still be standing at the end of the season.

There are teams boasting veteran talent, like the Paris Eternal who are fielding known quantities like George "Shadowburn" Gushcha and Terence "SoOn" Tarlier. There are teams who are betting on younger talent, like the Washington Justice with standout youngsters Ethan "Stratus" Yankel (17) and Corey Nigra (19). But the most interesting team might be the Chengdu Hunters, who are betting entirely on talent from their home country of China.

Bonnie Qu wrote a fascinating peek into the Hunters' all-domestic strategy on ESPN Esports. Qu notes that while the Hunters are perceived as one of the weaker of the Chinese squads, their ability to communicate on the field in their own language gives them a great potential for growth over the course of the season. It should also be interesting to watch Lo "Baconjack" Tzu-Heng work again, following a brief stint in the world of competitive PUBG.

The game to watch in the opening week will involve the aforementioned Washington Justice, as they take their young roster into a Saturday matchup against the New York Excelsior. Speaking of which...

Can the New York Excelsior rebound from postseason disappointment?

The New York Excelsior dominated the Overwatch League regular season in 2018, popping up in multiple Stage championships and entering the postseason heavily favored to win it all. Then something funny happened. The Excelsior drew the Philadelphia Fusion after a bye week and proceeded to lose both sets, unceremoniously ending their season before reaching the finals.

It was a bitter pill to swallow for the Excelsior and the road back to the playoffs isn't getting any easier with the addition of eight new expansion teams. The silver lining for New York is that they're another of the league's top teams who are coming back with their roster mostly intact. And with a roster filled with names like Overwatch League MVP Seonghyun "Jjonak" Bang, Jong-Ryeol "Saebyeolbe" Park, and Do Hyeon "Pine" Kim, the Excelsior are still as dangerous as they've ever been.

The Excelsior's opening week sees them taking on the Boston Uprising and the expansion Washington Justice. How the Excelsior comes out following last July's loss should set the tone for the team's season going forward. And if they come out firing, the stage will be set for a barnburner of a Week 2 matchup against rival Los Angeles Valiant.

How will the Gladiators and Fissure fare, post-divorce?

The Overwatch League postseason was one filled with drama for the Los Angeles Gladiators. After clawing their way from the near the bottom of the standings for most of the season, the Gladiators made an incredible run to make the playoffs. Much of their effort could be credited to MVP runner-up Chan-Hyung "Fissure" Baek. The Gladiators seemed poised to make a fierce postseason run, with Fissure leading the way.

Then Fissure got benched.

The rest is history. Fissure didn't play in the Gladiators' lone postseason series, the Gladiators were sent home, and Fissure has since found his way to the Seoul Dynasty. So now the question is, have all parties put this drama behind them?

Fissure now slides into the Dynasty as part of a formidable one-two punch with ByungSun "Fleta" Kim. Still considered the best tank player in the world, Fissure now has the Korean-speaking roster that he was allegedly seeking and seems poised to help the Dynasty see their postseason aspirations through to the end.

Meanwhile, there are understandably question marks regarding how the Gladiators can fill the void left by Fissure. While Luis "iRemiix" Galarza Figueroa filled in capably for Fissure in the playoffs, he has since been released from the team. That puts a lot of pressure on Aaron "Bischu" Kim, not only to fill the shoes left by the team's departing tanks, but also to continue acting as the team's interpreter for some of the new Gladiators arrivals, like Chang-hoon "r0ar" Gye.

It should be noted that the Gladiators and the Dynasty meet on opening night. Be on the lookout for anyone playing with an extra chip on their shoulder.

Does Ashe fit into the competitive meta at all?

The casual Overwatch fan might tune in this week with a few changes to the game still fresh in their mind. One of the biggest changes to the game involves the addition of an entirely new hero. Ashe first debuted shortly after BlizzCon and with her mixture of shotgun proficiency, zoning ability with her Dynamite, and the potential for trickery with the Coach Gun, it's worth asking whether Ashe can fit into the pro Overwatch meta.

That answer seems to range from an unenthusiastic "maybe" to a much more resounding "no." The San Francisco Shock's Jay "sinatraa" Won and coach Dae-hee "Crusty" Park made sure to note to Shacknews that Ashe's current composition doesn't quite work for the competitive meta at the moment. That's especially the case with better DPS options like Widowmaker out there.

Is that to say that Ashe won't work at all? Not entirely. Speaking to Shacknews, the London Spitfire's Gesture did note that Ashe could be used for situational purposes on hybrid or control point maps. Not so much for her, but more for B.O.B. There's a little more that Gesture had to say to Shacknews, but we'll table that for later in the week, so stay tuned.

Season 2 of the Overwatch League begins on Thursday, February 14. Be sure to brush up on the rosters and keep it on Shacknews, as we'll be checking in on the regular season as it progresses.