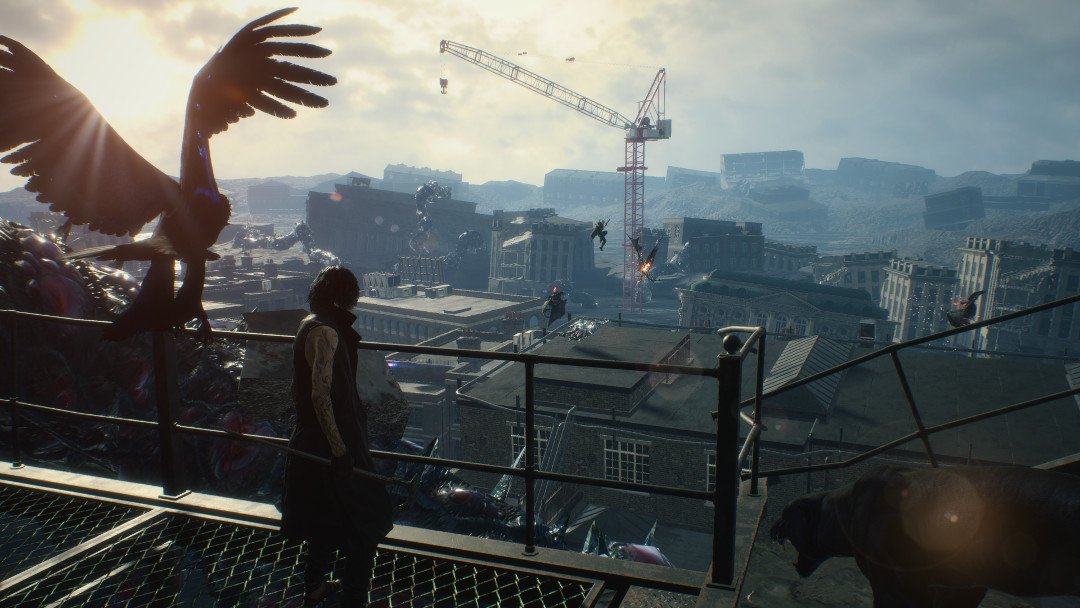 The last time I got some hands-on time with Devil May Cry 5 was back at last year’s Tokyo Game Show. However, with the game now just roughly a month away, I had the opportunity to dive even deeper into DMC 5 and check out several early levels as well as get some play time with the game’s third playable character, V on an Xbox One build of the game.

As Devil May Cry 5 opens, players will find themselves in the middle of an attempt to defeat a giant demon named Urizen. All the key players from the series are there including the three playable characters, Nero, V, and Dante. Dante and his crew are doing their best to kick the demon’s butt and, of course, things don’t go as planned. Nero is thrown back into the real world and several demon spires start sprouting up around the area. From there, players will time jump ahead to a city desecrated by the demonic plant-like spires. Dante hasn’t been seen since the battle and things are not looking good for humanity in general. It’s now up to Nero, V, and the tech-savvy Nico to take down some of these spires and find their missing comrade.

Most of the levels are full of decaying urban sprawl accented with overgrowing demonic vines and the ashy remnants of human victims. Each level is chock full of hidden areas and items that can be found by peeking around the right corner. There are even secret missions that can be unlocked by finding hidden images while standing in a key spot in various levels. Secret missions are kind of like a bonus round that will offer up players a chance to gain some rare and helpful items to help them along their journey. For some levels, players will be able to select their character before starting. Folks will have to replay some missions to experience everything the game has to offer.

Combat plays out in several unique ways depending on which character you’re given, or in some cases select, for a given level. Nero uses a combination of his sword, pistol and robot arm to take on enemies. Nero’s robot arm has variants that can be swapped with abilities that range from a grappling hook to a rocket-powered fist that can be launched at an enemy for an easy juggle combo. You can even blow up the arm to deal a large amount of short-range damage in a pinch.

While I’ve played as Dante before, his new style action system made a lot more sense within context this time. The system allows players to switch between four different fighting styles on a whim using the d-pad. Each one enhances an aspect of Dante’s abilities: Trickster boosts agility, Gunslinger amps up long-range weapons, Swordmaster is for slicing and dicing, and Royal Guard is all about defense. Players will have to become familiar with the various enemies and their patterns in order to exploit the potential of the style system to its fullest.

The third and final playable character, V, probably has the most unique fighting system of all the characters. V can summon his demon pets to take on enemies for him. For up-close attacks, there’s the panther Shadow who can not only hack and slash but pull off some cool buzzsaw attacks and turn into a giant ball of spikes. A sassy demon bird named Griffin handles long-range assault and can also use charged electric attacks. Once V’s demon trigger meter has three full bars he can also summon a giant golem-like demon for short time that does a hefty amount of damage. While V doesn’t really do any brawling himself, he does have to deliver the killing blow to his enemies.

While each of the three playable characters uses the same control setup, each one felt very different when actually playing. Each character is going to demand players develop different strategies and be ready for a lot of variety. Whether that’s going to be a good or bad aspect of the gameplay will really depend on the individual player.

In between missions, and wherever a working phone can be found in a level, players will be able to spend their hard-earned red orbs in the campervan of southern belle/Amy Winehouse lookalike Nico. This is where players will be able to buy new abilities and combos for their current character as well as upgrades for health and devil trigger meters. Nico will also occasionally provide Nero with a new type of robot arm.

After getting some prolonged hands-on time with Devil May Cry 5 and with V’s combat mechanics, I’m definitely ready to see what the full game has to offer. Hopping between three such unique characters who all have their own spin on the game’s core mechanics is definitely an interesting twist. So many hack-and-slash games turn into basically doing the same combo over and over, but having to switch it up here and there is definitely going to help stop that. Then there’s all the questions that the plot raises. What happened to Nero’s arm? Who survived the assault on Urizen? What exactly is V up to? Why can’t I just run everything over with Nico’s van?

Devil May Cry 5 will be raising hell March 8 when it launches for Xbox One, PS4, and PC.