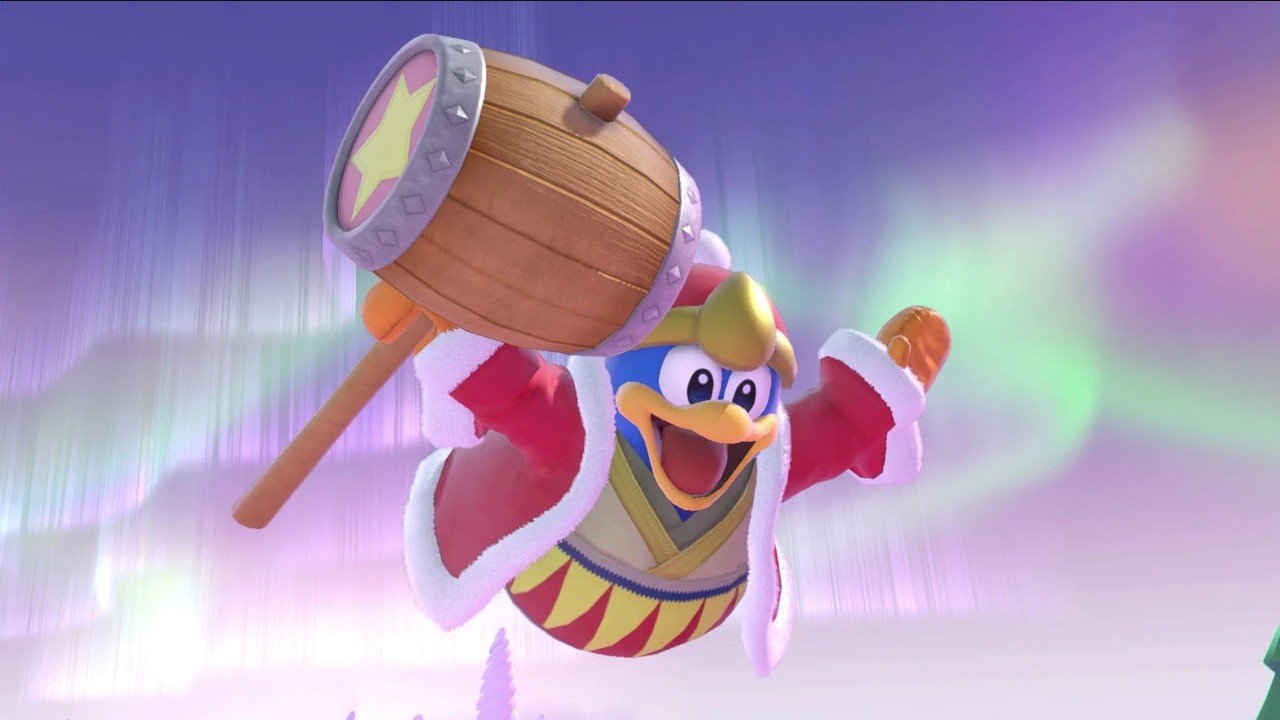 For the last 20 years, the faces of Nintendo have clashed in the Super Smash Bros. series. We're now in 2019 and Super Smash Bros. Ultimate has brought back all of Nintendo's top characters, some of the most recognizable third-party names, and all-new entries to the series, where they'll battle it out once more.

Our breakdowns continue with another returning character from Super Smash Bros. Brawl, someone who eats loudly and carries a big hammer.

Who is King Dedede?

King Dedede is one of Kirby's biggest (in more ways than one) rivals. He's not pure evil, like some of Kirby's other adversaries. He's more of a greedy jerk. Dedede isn't even a real king, acting as the self-proclaimed king of Dream Land. He eats everything put in front of him and puts Dream Land through various hardships for his various selfish desires.

Despite Dedede's demeanor, he has fought alongside Kirby in the past. When faced by threats like Nightmare, King Dedede has offered to join Kirby in service of the greater good. After all, Dedede can't feast if there isn't a world left to feast in.

King Dedede is a super heavyweight fighter and having taken part in one too many Gourmet Races, he isn't exactly the fastest character out there. What he lacks in speed, he makes up for in pure power. And that power comes from his mighty hammer.

Dedede's hammer is a blunt instrument of destruction, able to KO at early percentages depending on the opponent. His forward-smash is one of the most powerful in the game, especially if it lands clean. Casuals might even consider forgoing certain items in favor of Dedede's hammer, just because of its range and sheer strength.

King Dedede is not great in a one-on-one situation. But in chaotic four-player or eight-player smashes, he's a force of terror. Dedede can wipe out multiple opponents at once with his hammer and if left to his own devices, a fully-charged forward-smash is sure to KO at least one opponent.

On top of that, Dedede is largely improved from his Smash 4 counterpart. His tilts and smash attacks not only deal greater damage, but his forward-smash can also break shields frequently. Forward-smash does take some time to activate, so if you see a shielding opponent, consider using his improved back-throw, which now has greater KO potential.

As noted, King Dedede is considered low-tier in competitive circles, because of his slow movement speed. His best option in competitive play is his Gordos, which are easily sent flying back his way.

That doesn't stop the VGBootCamp folks from trying him out and observing some of his more noteworthy changes. They try out his improved Inhale, which is capable of catching projectiles, along with a new back-air. But the character is largely unchanged from Smash 4, so this video sort of devolves into a tennis match.

Let's shift to some tournament footage and a look at one of the best Dedede players in the world, Canada's Dawson "Big D" Perron. Observe his defensive play against a fellow super heavyweight in Donkey Kong, as well as a master's class in Gordo edge-guarding.

So what happens when the pros won't analyze Dedede? We turn to the top amateurs. Washington D.C. Dedede main Soul Train has done extensive research into the character, with his Jet Hammer analysis proving the most fascinating. Here's a look at what he found:

Frame analysis on Jet Hammer. Like DK's Punch, it has a "9-wind" state, swinging anywhere in the ~30 frames before full charge...uncharged kills earlier than Full Charge. This move now HITS ALL LEDGEHANGS and HAS HEAVY ARMOR ON SWING, ya'll need to learn its use. (1) #SSBU_K3 pic.twitter.com/aJYiSiXJDn

(3) I'm not saying this move is amazing or spammable. But it actually has insane pressure in ledge/trap situations where the opponent is forced to play defense. Practice reacting to options, and you'll get kills at stupid low %s.

All Seasonal Challenges, Season of the Splicer - Destiny 2
Login / Register