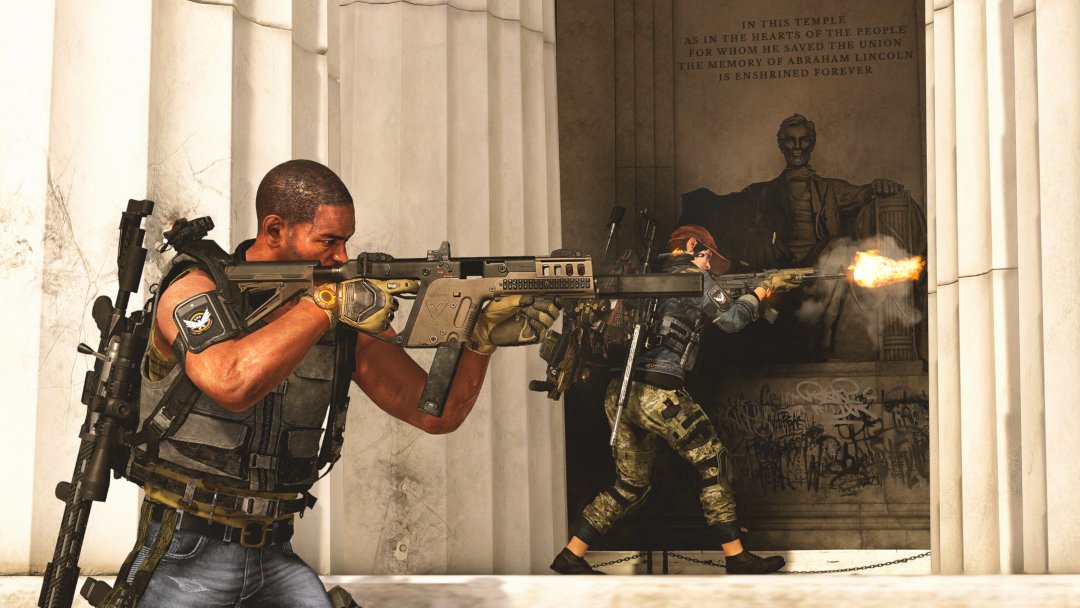 When The Division first hit store shelves a few years ago it was an enjoyable experience, but somewhat limited in its scope. Fortunately for fans of tactical co-op shooters, we live in an age where a game’s content can go beyond what it's initially packaged with. A few changes and patches were made here and there and presto, The Division became one of the greatest post-launch success stories in gaming history. This time around, the game’s loyal fan base they won’t have to wait to see any of those improvements be patched into The Division 2. I got a chance to get some hands-on time with a PC build of the single player/co-op mode to find out first-hand just what’s in store for players when the full game launches later this year.

The story takes place seven months after the outbreak of the deadly virus that wiped out a hefty chunk of the population and the United States is falling into utter chaos. Players will take on the role of a Division operative who receives a distress call from Washington, D.C. That’s where all the action starts. Players’ first objective when entering the campaign mode will be to take out members of a rival faction who are trying to invade the White House. Once the enemies are cleared out this becomes your central base of operations for the remainder of the game.

The base of operations is very similar to that in the first game although now it feels like the focus is much more on improving the singular agent rather than building up the base to unlock perk options. You will still have to do missions to help get the base back to 100% as well as missions for several settlements to help them grow. As settlements grow, players will gain access to more vendors.

Each area of D.C. is controlled by a rival gang each with their own set of goals. Players will take over areas by completing missions and capturing enemy strongholds. Since this is more of a living world where your decisions make an impact, there’s no such thing as permanence, anything captured can be liberated. Even settlements can be taken over and may need help being rescued. As enemies take over more territory they become a stronger, bigger threat and may even start executing citizens if things get too out of hand.

When it comes to the core game mechanics, Division 2 is definitely its father’s son. While players can take on the game all by themselves this is really a game designed for tactical co-op combat. There’s still a lot of cover-based combat that goes down as you and your fellow agents take out baddies in the name of freedom, but the ante has definitely been upped this time around. Not only is the AI much better at working as a team, but the enemies themselves are now much more diverse and difficult.

Enemies run the gamut from your standard grunt fodder up to massively armored super badass with armor that you’ll need to destroy piece by piece to inflict damage. Some enemies may have access to similar perks as players and will be able to disperse things like turrets or drones to assist them. There are even some very scary looking robot dogs and tank-treaded bots with mounted guns that players will have to contend with.

Once players have gotten to the end game they’ll have to contend with a rival that has advanced tech and armor known as the Black Tusk. By the time the players get to the end game missions they’ll be well prepared, but even then the Black Tusk missions look like they’re going to be no joke. Missions against them will be much longer and shoot-outs will get way more intense. Be ready to hunker down, because shootouts are going to take some time to get through. Prepare for long and intense combat scenarios, especially in the end game missions.

While the AI opponents of Division 2 will offer up a challenge, players will have plenty of options for outfitting the right arsenal to deal with them. On top of the various assault rifles, sniper rifles, pistols, and so on players will have new skills along with their returning ones. While the seeker mines and turrets are still there, there’s also assault drones and chemical guns. There are also three new specializations for players to choose from: the survivalist, sharpshooter, and demolitionist who each get a special crossbow, sniper rifle, or grenade launcher respectively.

As far as visuals go the team at Ubisoft has done their best to make a scale replica of the real Washington, D.C. within The Division 2. However, this is a D.C. that’s been in a state of decay for over half a year and nature has taken over quickly. Wild deer scamper through empty, trash-laden streets while raccoons dig through overflowing dumpsters. Some buildings have started falling apart some have flooded. In contrast, there’s a lot more color to be seen here than there was in the cold winter streets of a dying New York.

To me, The Division 2 seems to know that it doesn’t need to mess with success, but does need to offer up more than the original does. Much of what I saw built off that foundation but definitely gave me something I didn’t see in the first game. On top that, the team has plans for even more new, free updates down the line including eight-player raids. Fans don’t have too much longer to wait to get their hands on the next chapter in The Division series, the game will be launching on March 15 for Xbox One, PS4, and PC.