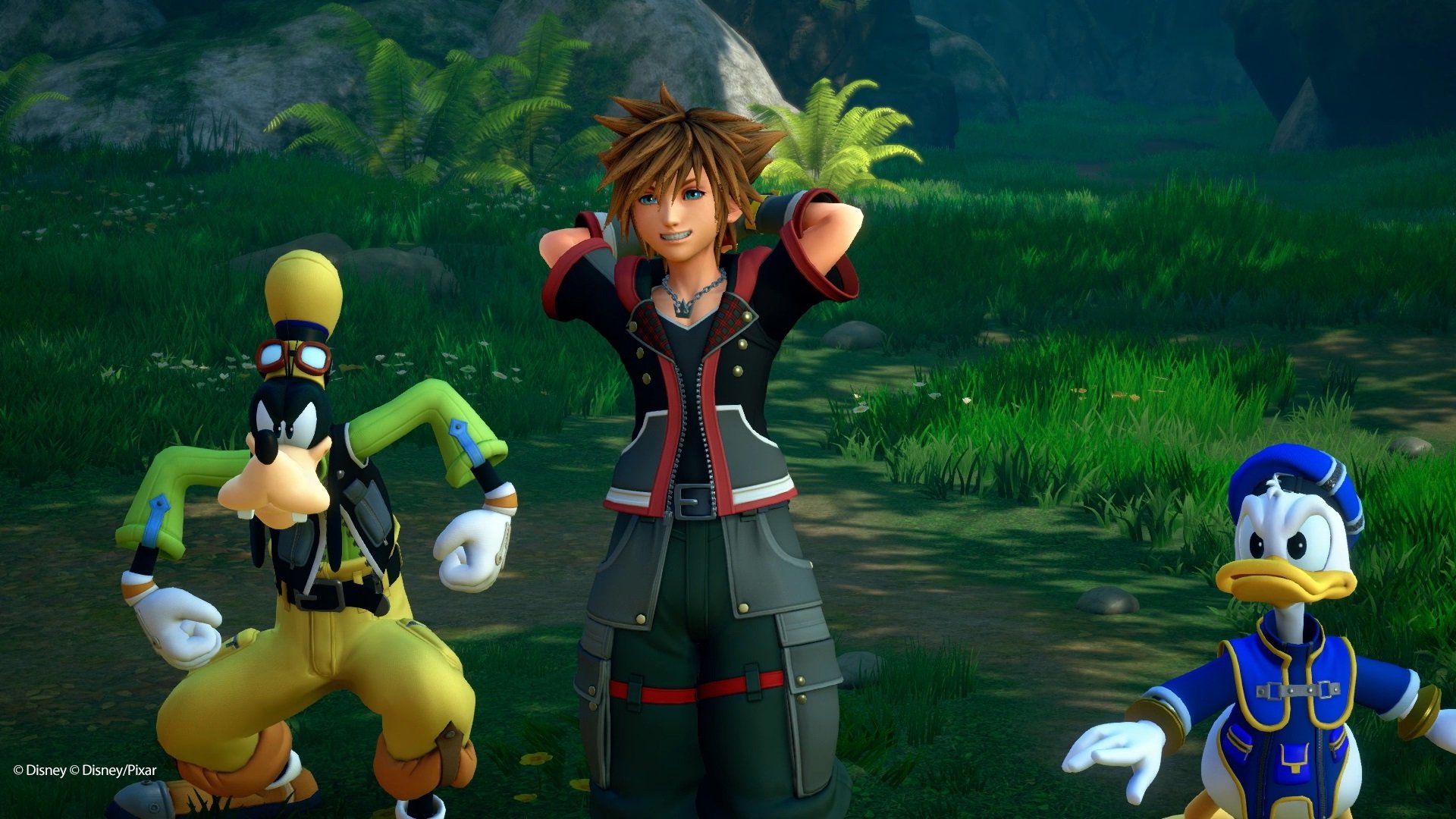 Kingdom Hearts for Dummies: Who are the key characters?

It's been over a decade for hardened Kingdom Hearts fans. But the time is finally here. Kingdom Hearts III is set to hit stores on Tuesday and hit digital marketplaces tonight. That means Sora's story is about to come to a close and this battle between light and dark will end. And with beloved characters like Mickey Mouse, Donald Duck, and Goofy [No Last Name] at the center of this conflict, casual players will more than likely want to get in on this, even if they haven't played a Kingdom Hearts game prior to this. Should be easy to jump in, right?

As has been stated many times in the past, the Kingdom Hearts storyline starts off simple and gets gradually more and more complex. It's to the point that the narrative has turned incomprehensible to the uninitiated. Does that mean it's impossible to follow what's happening? I certainly hope not, because I'm going to attempt to offer up some bulletpoints on the biggest key plot points for everyone to know heading into KH3. The game proper will offer up a handful of recaps to help prevent the average user from getting lost, but Shacknews is also here to help fill in a few blanks by explaining key characters of the story to this point.

Meet Sora, the hero of this journey

Sora is the main character of Kingdom Hearts. He's drafted into a war with shadowy being called the Heartless, who represent darkness and what happens when a heart's light is extinguished. Sora's home, the Destiny Islands, is destroyed by the Heartless, but as it's destroyed, Sora is granted the power of the Keyblade, a weapon that can unlock a heart's light and extinguish the darkness.

King Mickey has been a part of the war against the Heartless for years and drafted his trusted squires, Donald and Goofy, to aid the Keyblade wielder. They meet in Traverse Town and become a merry band of three friends, journeying across worlds (both original and based on various Disney works) to fight off the Heartless that threaten to overwhelm them the same way they did the Destiny Islands.

Sora's been through a lot. At one point during the main story, he's lost his own heart, a critical event that has had major ramifications on the main story. He's encountered various forms of Xehanort (who we'll get to later), his lackeys in Organization XIII, and even fought against his best friend, Riku. Heading into Kingdom Hearts III, Sora's still not at his peak strength and has actually taken steps backwards since Kingdom Hearts II, mainly because of what happened at the end of Kingdom Hearts: Dream Drop Distance. So yes, Sora's the main character. He's not the strongest, though. That title might go to...

The central plot of Kingdom Hearts: Dream Drop Distance involved Sora and Riku taking the Mark of Mastery exam, the same one undertaken by the main characters of Kingdom Hearts: Birth By Sleep, who we'll also get to later. Sora was ultimately defeated by KH2 villain Xemnas and briefly fell to the darkness. He failed his exam. However, Riku managed to save Sora and bring him back to the light, thus successfully completing the exam and earning the title of Keyblade Master.

Riku earning the Keyblade Master title is the culmination of a long redemption arc. In the first game, he was possessed by Ansem, the Heartless left behind by Xehanort, and nearly destroyed Sora and his friends. Riku was defeated and has worked to make amends for his actions ever since. One person believed in Riku above even Sora and that's King Mickey. King Mickey personally guided Riku back into the light and has fought at his side ever since.

Riku's primary mission involves finding out what happened to the missing Aqua from Kingdom Hearts: Birth By Sleep, a Keyblade Master who fought alongside Mickey and sacrificed herself to the darkness. With Aqua still out there, Mickey and Riku are pursuing her in hopes that she can help in the final battle against Xehanort.

And speaking of that guy...

Meet Xehanort, the man behind everything

Xehanort is the master villain of Kingdom Hearts. He's the guy behind everything, driving everything with his complete and utter obsession with darkness. He's on a mad journey to create a universe of pure balance, forging the legendary χ-blade and using a new Keyblade War to extinguish enough of the light so that light and darkness can be in perfect balance.

He's basically this guy, but without the fancy glove:

To get this Keyblade War off the ground, Xehanort is seeking out multiple versions of himself across time. That includes a younger Xehanort that first debuted in Kingdom Hearts: Re:Coded and Dream Drop Distance. While the original Organization XIII fell in Kingdom Hearts II, their defeat has liberated their human selves. And while some of those human vessels have returned to their past lives, some have vowed to continue fighting behind Xehanort and each hold a piece of his heart, creating a perfect version of Organization XIII. With the aid of his Heartless (Ansem, final boss of Kingdom Hearts) and his Noboxy (Xemnas, final boss of Kingdom Hearts II), Xehanort's ultimate plan to get the new Keyblade War started is to pit this new Organization against the seven defenders of light, all Keyblade wielders.

Three of those wielders are Sora, Riku, and King Mickey. Three more are missing and become a key element of the KH3 plot.

Birth By Sleep and why its heroes matter

With Xehanort gathering his vessels and preparing his dark forces, the heroes of Birth By Sleep are more essential than ever. That's why Riku and King Mickey are searching for Aqua, while everyone else waits for leads regarding the other two characters.

Who is Roxas and why does he matter?

Before getting to Roxas, let's define a Nobody. A Nobody is an empty shell left behind when someone succumbs to the darkness and becomes a Heartless. The Nobody isn't light or darkness, but rather the absence of both. Nobodies are the void.

Roxas was the Nobody that Sora left behind when he briefly became a Heartless in the first game. He is an anomaly among the Nobodies, as he has the qualities of someone who possesses a heart. He values friendship, joy, and all of the other things that a normal person with a heart does. He just doesn't have a heart himself. His nature as an anomaly comes from the fact that he comes from Sora.

Roxas eventually sacrifices himself in order to wake a comatose Sora from Castle Oblivion, following the events of the original Kingdom Hearts. Roxas no longer exists, but a piece of him remains inside Sora's heart. And in Kingdom Hearts III, everybody's after him. It's Roxas' place as an oddball Nobody that has attracted both Sora and Xehanort's attention. For Sora, Roxas is somebody who has forged bonds and friendships and is deserving of existence. For Xehanort, Roxas represents a powerful warrior who would serve at his side and act as a powerful vessel.

The search for Roxas becomes a key plot point in Kingdom Hearts 3.

But Kairi is not a damsel anymore. At the end of KH2, she showed that she was also capable of wielding a Keyblade. And now she's ready to join the fight herself and actively help her friends. Kairi is training alongside Lea (the former Axel) and it appears that she'll be taking out Heartless by the time KH3 is over as a fully-trained Keyblade warrior.

Who are the other key players?

First person to know is Ansem the Wise. He's been researching the heart for years and took on the lost Terra as an apprentice following the events of Kingdom Hearts: Birth By Sleep. Ansem's research has been perverted by Xehanort, the latter of whom stole his name. That act left Ansem the Wise embittered and on a quest for revenge. But seeing the carnage that his research caused left Ansem with remorse. He ultimately sacrificed himself to destroy the Organization's manufactured Kingdom Hearts in KH2, but the act didn't cost Ansem his life, it actually left him in the Realm of Darkness, where he's currently with Aqua. Ansem's research continues to play a key role in Xehanort's machinations.

Lea (pictured above with Kairi) is the former Axel, formerly of Organization XIII. While Roxas was considered the anomaly of the Nobodies, he actually developed his strongest bond with Axel. The two remained best friends to the end. After Axel sacrificed himself to save Sora near the end of KH2, his human self was liberated. Lea has since joined up with Yen Sid, King Mickey, and the forces of light, learning how to wield his own Keyblade and seeking to atone for his actions under the Organization. He's also the wild card in the ongoing Roxas storyline.

Lastly, there's Maleficent and Pete. Speaking of wild cards, these are the two biggest question marks. Maleficent controls her own Heartless and seeks to control the world herself under the cover of total darkness. Her goals put her at odds with Xehanort and his quest for perfect balance, with Maleficent and Organization XIII having clashed multiple times during KH2. Very little is known about Maleficent's role in the KH3 storyline, except that she and Pete are searching for a mysterious black box. What that box is or what it does is unknown.

And those are the major characters for Kingdom Hearts. Hopefully, this clears things up a bit heading into Kingdom Hearts III on Tuesday. For more, be sure to visit our various trailer analyses that go all the way back to E3 2017.