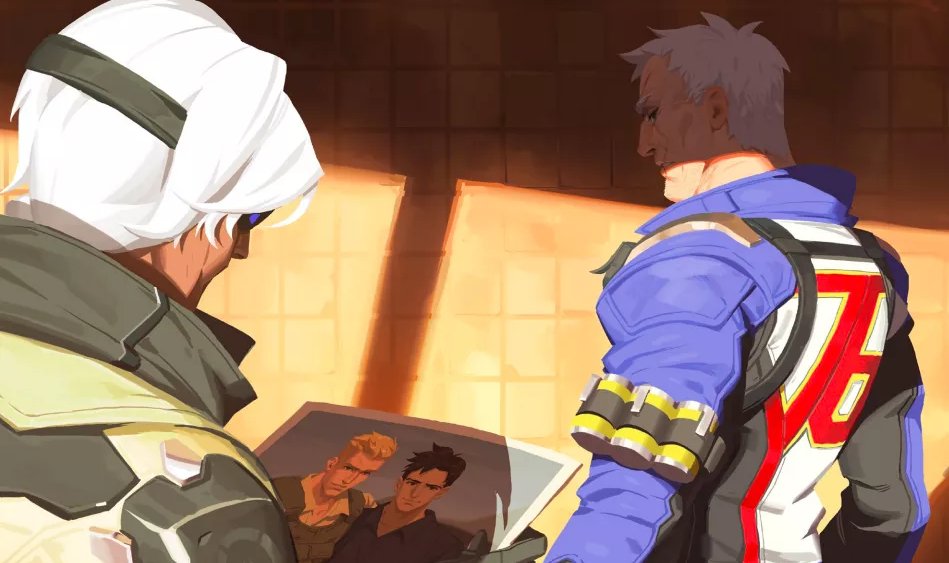 A new Overwatch short story called "Bastet" is shining an

"Bastet," written by Overwatch lead writer Michael Chu, takes a look into the game's past during a meeting in the present between Ana and Soldier: 76. Fans get a look at a continuation of the Old Soldiers comic, which revolved primarily around Ana, as the story gives us a more complete look at the sniper hero's past, adding a wealth of other details as well.

BASTET: A fierce protector arises from the shadows . . .

Ana and Soldier: 76 catch up after Ana finds the wounded hero (real name: Jack Morrison) and brings him to her home in Cairo to rest up and get well. Ana had previously tried to get in touch with daughter Pharah in her time of need, while Soldier: 76 was in a relationship with a man named Vincent. A particular passage in the story implies that he was romantically involved with Vincent:

“Vincent…I haven’t thought about him in years,” Ana said. “Still keeping a candle lit for him?”

“You’ve never looked in on him? You must have been curious. All the surveillance power in the world. I bet Gabe would have put a Blackwatch agent on him if you asked,” Ana said.

Jack glared at her.

Jack laughed. “He got married. They’re very happy. I’m happy for him.”

“Vincent deserved a happier life than the one I could give him.” Jack sighed. “We both knew that I could never put anything above my duty. Everything I fought for was to protect people like him… That’s the sacrifice I made.”

“Relationships don’t work out so well for us, do they?” Ana said, unconsciously running her thumb over where her wedding ring used to be."

Lead writer Michael Chu took to Twitter to confirm that Soldier: 76 is indeed gay, as is Vincent, which makes him the second confirmed queer character in the Overwatch universe. According to Polygon, this isn't the first time we've seen this photo of Soldier: 76 and Vincent, either – it was first shown off in the comic "Reflections," which if you remember introduced Tracer as having a girlfriend.

Thanks for all the messages about “Bastet”!

Jack and Vincent were in a romantic relationship many years ago. Both identify as gay. ❤️

Beyond this revelation, "Bastet" also is seemingly setting up a new skin for Ana in the future. Near the story' end, they head out on a new mission, with Ana wearing a cool new Bastet costume, in tribute to the Egyptian goddess. There's no word on whether this will be a new skin or not, but it certainly does look like we could expect one.

You can read the full story here to get caught up on your latest dosage of Overwatch lore.