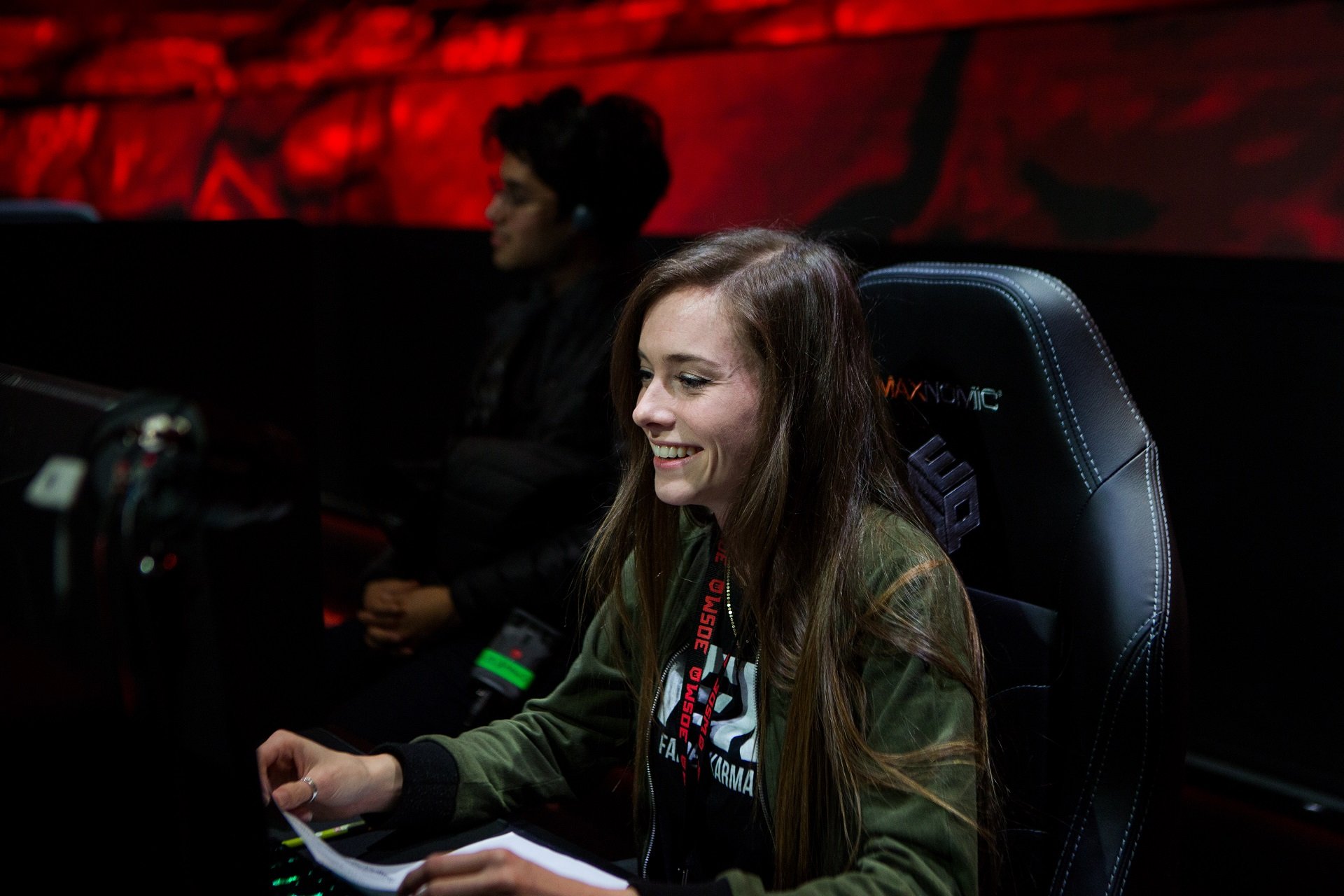 Friday saw the conclusion of the second World Showdown of Esports event in sunny Southern California. The top women in Hearthstone came together to compete in a two-day tournament, with the winner receiving the lion's share of $30,000. But this week's tournament was interesting in more ways than one. It was conducted just hours after Blizzard went live with a new balance patch that took a handful of the decks these players planned to use and threw them out the window.

Among the competitors was Twitch streamer Allie "Alliestrasza" Macpherson. She made it all the way to the second day of competition, but ultimately fell 0-3, just short of making the Top 4. Macpherson was kind enough to bounce right back and speak to Shacknews about her time as a streamer, her development as a pro Hearthstone player, Wednesday's balance patch, and women in esports.

Shacknews: How long have you played Hearthstone and when did you first start streaming?

Allie "Alliestrasza" Macpherson: I've been playing Hearhtstone for about three and a half years and I first started streaming February 1, 2016, so I'm coming up on my third year of streaming.

Shacknews: You've gotten into the competitive side of Hearthstone, but you're primarily known as a Twitch streamer. Do you feel that your work as a streamer gives you a unique perspective in competitive play?

Alliestrasza: Because streaming is my main job, I feel like there's a bit more of a mental grace period. I feel like my career and success isn't just entirely dependent upon winning competitions, because streaming is really my main focus. But I obviously play the game a lot and I've really been enjoying competing more. Slowly but surely, I'm becoming more confident in myself. I'm more excited to compete now, whereas before I was a little bit more nervous.

Alliestrasza: Alliestrasza: Twitch Streamer is definitely more geared towards entertainment. I'm interacting with the chat. My full focus isn't entirely on the game when I stream. So you're prone to missing things here and there. But when I'm competing, I go pretty "try hard" mode, which is not exactly what I'm doing when I'm streaming.

Shacknews: How surprised were you to see the Hearthstone balance patch hit when it did?

I think it was fine. I'm really, really happy with the changes. Overall, I thought it was great. It definitely was a bomb that was dropped on us the night before deck submissions. So it was a bit of a shock, but I think it worked out and it was all fine.

Shacknews: How did the patch affect the decks that you used for this tournament?<?p>

Alliestrasza: Fortunately, I didn't have too many decks that were affected. I think it was only two. I was originally going to bring Odd Paladin. It wasn't necessarily my deck list that was super affected. It was more the matchups that you memorize for this really intense format. I think five meta decks were nerfed, essentially. I had memorized those matchups for those five decks that were completely removed from the competition. That was definitely something that shook up my game plan. My plan was to ban Odd Paladin every time. And then Odd Paladin got nerfed.

Shacknews: What do you feel is a Tier 1 deck now, post-patch?

Alliestrasza: I still think Deathrattle Hunter is insane. I think it's the best deck in the meta, honestly.

Shacknews: You're not originally from the area. What brought you out to Los Angeles?

Alliestrasza: I met my boyfriend while I was in college in San Diego. I was doing an internship. When I graduated, I made the move out here to be with him. We had been dating for 18 months or so and... I guess I just... I was like "I like this guy." So that's what brought me out to California.

Shacknews: This is one of the first Hearthstone tournaments of its kind with an all-female field. How does it feel to be a part of this and is there anything you want to say to any of the young girls or women that may have been watching you these past few days?

Alliestrasza: Absolutely! To any ladies, women, that have been watching and are excited: Compete! Please! This industry is developing, it's growing, and I really think we need women to help pave the way that we want it to be. I've been seeing so many positive comments, particularly from women, excited about this tournament on Twitter and it's been warming my heart completely. It was an honor to be invited, I would love to be invited again. This, honestly, I don't know if I'm a bit biased, but this has been my favorite tournament I've ever competed in. There's a really cool energy, all of the girls are really friendly with each other, it's not catty or dramatic, at least in my experience. I've really loved it and, yeah, to any girls, compete!

Shacknews: Lastly, is there any particular deck coming out of this last expansion or even out of the patch that you feel might be underrated?

Shacknews: I did see you playing Murloc Mage.

Alliestrasza: Yeah! Aggressive Mage decks sometimes just find their way into the meta. They brought a good tool kit of Fireballs and Frostbolts. Quite a few people brought Murloc Mage and I do think it was kind of underrated. Other than that, I'm not sure. I think the meta is still figuring itself out. Maybe Odd Mage is underrated potentially. We'll see.

For more on the World Showdown of Esports and what games they'll be featuring next, be sure to visit the WSOE website. As for Alliestrasza, you can follow her on Twitch and YouTube. And for more on this week's Hearthstone balance patch, be sure to check out our full analysis.

Ary and the Secret of Seasons hands-on preview: Totally chill