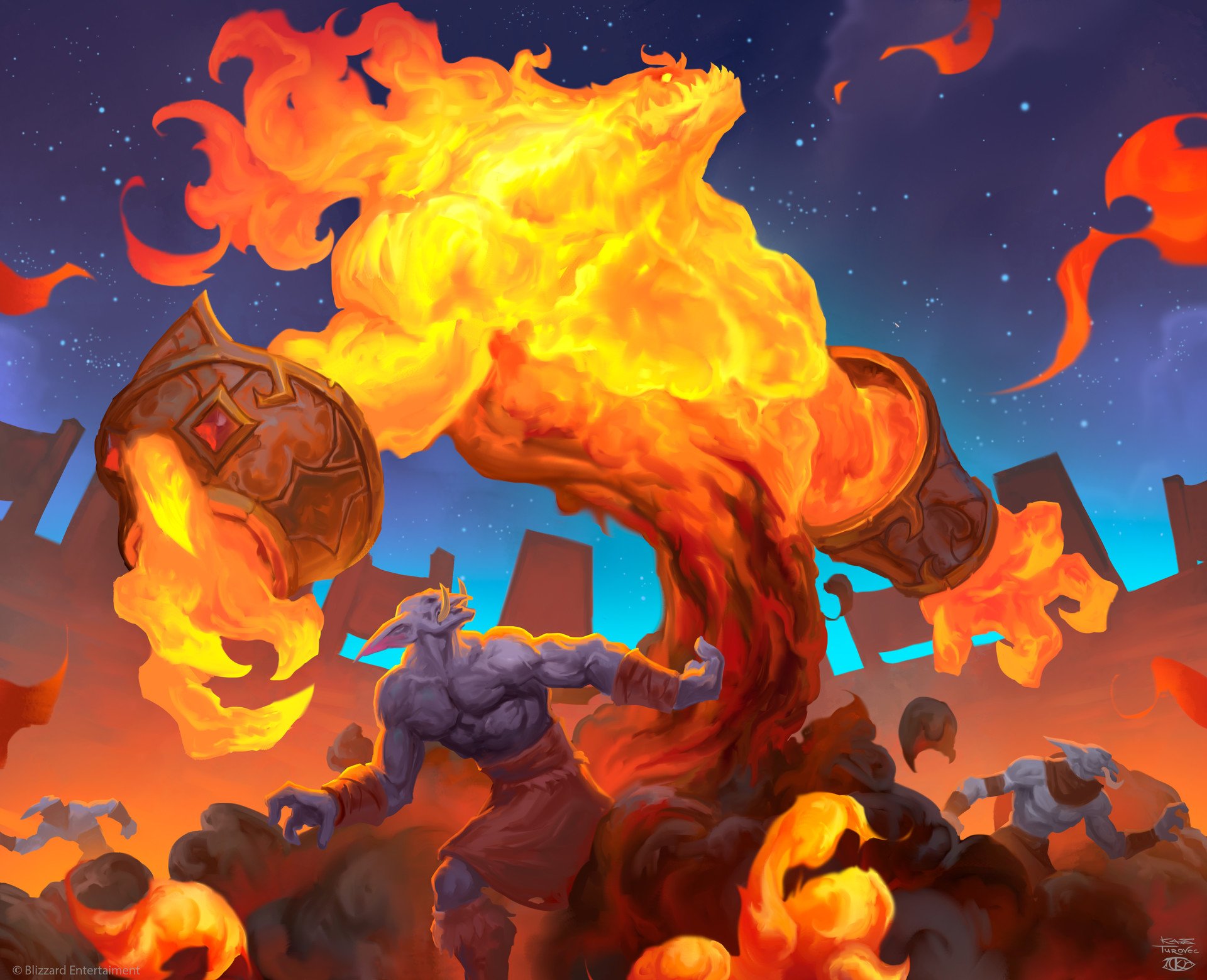 We're back on a regular schedule, following the final livesteam from earlier in the week, and we're on pace to analyze the full set before Tuesday's deployment. In case you missed it:

Yes, this is basically the Elemental version of Duskbreaker, but with a key difference. It's much more expensive and arguably comes too late in the game. If you're on Turn 6 looking to control the growing zoo population, it's likely too late to mitigate all the damage, especially with Mage's dearth of healing resources.

At 5 Mana, it might work a little better. At 6, it doesn't quite work. At that point, just stall the opponent with Blizzard.

Analysis: This is essentially mini-Val'anyr. Because it serves that same purpose, I can't imagine Farraki Battleaxe taking its place just yet. With the legendary weapons set to rotate out in early 2019, that'll be when this new weapon becomes a lot more enticing.

This could see a little more action in Arena, where it can act as a strong complement for Silver Sword. The trick is going to be in getting its Overkill condition to pay off. Assuming the Paladin player can withstand the hit, if a large minion does show up, use Equality first to guarantee the Overkill benefit.

Analysis: This is a solid utility card for the Shaman player and could be among the most underappreciated of this set. Nearly every class has a good 1-Cost spell that deals a quick two damage. Shaman gets an arguably better spell for the early game than Lightning Bolt, with an Overkill effect that's nice, but not one that anybody will go out of their way to pursue.

Even if it doesn't find its way into any Standard Shaman decks, this is a thumbs up spell to pick up from Hagatha the Witch or Witch's Cauldron. It's a perfectly fair spell and one that will see a lot of play, even if it doesn't necessarily make it into a lot of decks.

Analysis: Blizzard already seems to be looking ahead to Dark Pact rotating out of the Standard in early 2019. Granted, Possessed Lackey is also set to rotate out, which means Grim Rally is going to work in a slightly different way.

While Dark Pact worked for Cubelock plays and for control decks packing Voidlord, Grim Rally will be all about bolstering zoo decks. And yes, it can work on Devilsaur Egg and other eggs to help fill the board that much more. Zoo decks could look a lot more dangerous in the new expansion, thanks to this spell.

This guy's a twist on an old favorite. Remember the 5-Mana Blackwing Corruptor? The Crowd Roaster is stronger in almost every way, with a higher base Attack and an increased damage effect that can take down most minions on Turn 5. The only downside is, the 7 damage cannot go face.

One thing to note is that Hearthstone has changed a lot since Blackrock Mountain. Almost no decks are built solely on dragons anymore, with more and more players looking for the latest wombo combo. But there should still be a place for the Crowd Roaster in the current meta, both in Standard and Wild. And yes, it'll make a solid Arena pick, too. This one's going to be a winner.

(6) Stampeding Roar
Type: Spell
Class: Druid
Rarity: Epic
Summon a random Beast from your hand and give it Rush.
Source: HearthstoneTH on Facebook

Analysis: Blizzard's committing to trying to revive the Beast Druid archetype and Stampeding Roar has the potential to be one of its best new tools. If a player manages their hand carefully, it's possible to bring out the killer Tyrantus on Turn 6 and have it rush down a poor minion. And once it's on the board, it's one of the toughest minions in the game to remove.

If this card and Predatory Instincts are used solely to buff up Tyrantus, the Druid becomes nearly unstoppable. If the Druid player would rather opt to threaten with multiple high-value targets, they can also use Stampeding Roar to bring out their Ironhide Direhorn and use it to Overkill a target and summon a new 5/5.

Regardless of which of Beast the Druid opts to build around, Wild players should keep Menagerie Warden in their back pocket, just to make things even hairier for their opponent.

(3) Master's Call
Type: Spell
Class: Hunter
Rarity: Epic
Discover a minion in your deck. If all 3 are Beasts, draw them all.
Source: Bertels on YouTube

Analysis: What a fascinating spell for Hunters. This essentially means that Hunter players can Discover their King Krush, Charged Devilsaur, and Witchwood Grizzly, with the potential to pull all three of them.

I say slightly, because at that point, Recruit Hunters should just pull out Kathrena Winterwisp, so that they can get their King Krush and Charged Devilsaurs online on Turn 8. Master's Call has its uses, but it isn't quite as great as it looks at first glance.

Analysis: This is a fascinating spell and a different twist on the Evolve Shaman. In this case, evolution isn't so much a spell as it is a Deathrattle effect. This is a spell that can be used on high-attack Charge/Rush minions, like Steel Rager, to trade into dangerous minions and leave you with a random minion of an extra cost. The trick, of course, is whether that new minion is anything good.

I can't see too many constructed decks rolling the dice with this spell, but it's going to be fun to see how many Shaman players attempt to run with it if they pull it from a Hagatha drop.

Analysis: Whoa! Assuming the Warrior player has a dragon in-hand, this is a cheaper Shieldmaiden. And if they don't have a dragon, this is still a hefty 5/5 body on Turn 5.

A fantastic card all-around that's going to see a lot of play in the new meta and will be a surefire pickup in Arena. A big winner for the Warrior.

Analysis: This is a pretty solid on-curve Turn 3 play, with or without the effect. Fortunately, the effect is pretty easy to activate. Many Hunter players are bringing out the Turn 1 Candleshot. Secret Hunters are likely to use their Turn 3 on Eaglehorn Bow, at which point they can bring down Bloodscalp Strategist to Discover even more Secrets!

It won't fit into a lot of current Hunter archetypes, though Secret Hunter may want to consider giving it a whirl. Bloodscalp Strategist might see some play in Arena, just because that effect is very enticing. Arena players will definitely aim for the high roll and hope they come out with something like Crushing Walls.

Analysis: A spell that discounts Elementals certainly isn't a bad idea in theory. A Turn 5 Blazecaller or a 5-Cost Baron Geddon sounds pretty good. The question is whether the Mage player wants to take a precious slot in their deck and use it on this 0-Cost spell.

Want the honest answer? How does the idea of a 0-Cost trigger for Archmage Antonidas sound? That's the primary reason to put two of these into your deck.

As for Wild Mages, somebody's going to try and make a Turn 4 Ragnaros the Firelord happen. Best of luck to them!

Analysis: As one of the few Overkill minions with Rush, Sightless Ranger could find a home in zoo decks. The Hearthstone example on Twitter uses one of the best synergy possibilities, showing this minion playing nicely with Knife Juggler.

Token Druids and Shaman zoo decks will want to heavily consider this minion. With the goal to fill the board as much as possible for those killer finisher spells, Sightless Ranger could make that happen easily.

(2) Seance
Type: Spell
Class: Priest
Rarity: Common
Choose a minion. Add a copy of it to your hand.
Source: 4Gamers

Try combining Seance with Chameleos. Or create a fresh copy of Lyra the Sunshard. Did you pull a high roll off of a Free From Amber, but feel bummed that you couldn't get its Battlecry effect? Boom! Copy it with Seance and play it again on the next turn!

There's a lot that can be done with Seance and it should be interesting to see what combos come out of it.

Analysis: It's been years since Blizzard has brought out a new Return minion. I mean, jeeze, Quest Rogue goes out of control one time (okay, maybe twice) and they suddenly get gunshy about introducing new minions with Return effects.

The easiest workaround appears to be here. Design a Return minion that's class-specific. Bog Slosher goes the extra mile by giving that returning minion a buff, which means it's going to work nicely with Saronite Chain Gang or any host of Shudderwock Shaman staples.

Analysis: Linecracker looks pretty decent on paper. Then again, so did The Boogeymonster. The latter didn't see much play and I wouldn't expect this guy to, either.

What really holds it back is the lack of synergy options with pretty much anything. There's no easy way to get it on the board, it has almost no wombo combo potential, and it has to survive a turn on the board when removal options are plentiful. It's just not going to work.

It could find its way into an Arena deck, but I wouldn't expect to see it in the high-rung of those minions, either.

There are an ample number of Deathrattle minions that Da Undatakah can take on over the course of the game. And just about any class can find take advantage of him. Mage players can pick up new copies of Pyros. Druid copies can get a Hadronox effect. Priest players can introduce some outright shenanigans by having it take the Deathrattle of Zerek, Master Cloner.

Hunters, in particular, will be in a good position here, since they can use Play Dead to get the Deathrattle benefits immediately before the opponent can even think about any Silence options. Da Undatakah has the potential to make his opponents Rest In Peace. If you can, have those Silence options ready for this dead man walking.

That's all for now. This weekend, we focus on the class Loas, Spirits, and Champions before rounding out the rest of this expansion.

Hearthstone: Rastakhan's Rumble is set to release on December 4.