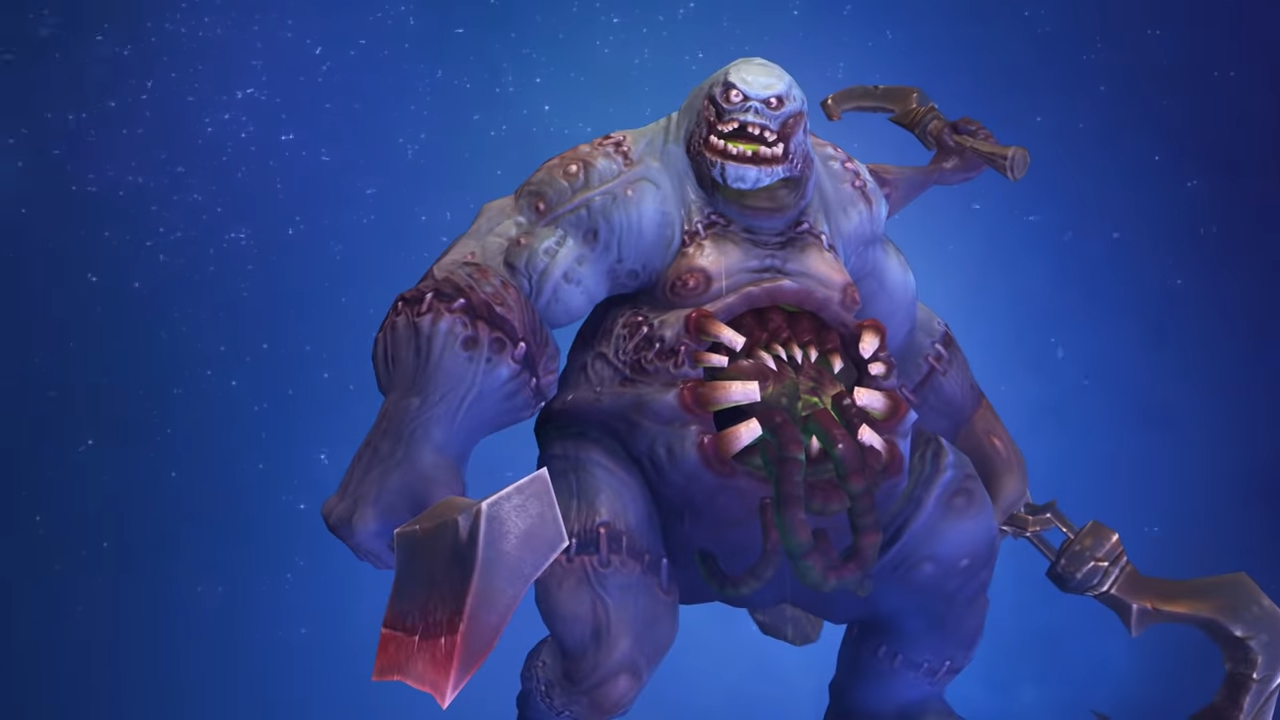 The Nexus is preparing for the new year, but there are still a few more patches for Heroes of the Storm to push out before 2019. The latest patch offers up balance tweaks for over a dozen heroes, while also introducing a new announcer pack. Along with this, Blizzard has offered a preview for the next major rework for one of the game's most popular characters.

Stitches is set to retain his aggressive play style, adding to his hook-based arsenal. However, he's also set to receive a number of tweaks that make him more of a utility character. His Vile Cleaver trait has been adjusted so that he spreads Vile Gas with every hit delivered, instead of every hit taken, encouraging more offensive gameplay. For example, Slam will now inflict additional damage and inflict Slow on enemies that are closer to Stitches. That means he can hook in a nearby enemy and ensure that they take the maximum hit possible.

Changes to Stitches and his talent tree are set to take effect with Heroes of the Storm's next update.

As for this update, a handful of heroes are getting balance changes. Among them is Orphea, who was just introduced to the game over the last month. She's receiving a healthy mix of buffs, along with a few nerfs to some overpowered talent combos.

"The first Nexus-born Hero has arrived and is showing a bit of teeth, especially in the burst department," reads the developer comments. "The combination of a high-stacked Ravenous Hunger combined with double-Chomps with Lurking Terror was a bit over-the-top, especially since she could set everything up fairly safely with Crushing Jaws. We have taken the bite out of that combo by linking the cooldowns of Chomp and Lurking Terror. We are offsetting this loss of burst by increasing her sustained damage potential and will continue to closely monitor. We realize that the loss of her blow-up potential will make Lurking Terror a much less exciting talent to pick and have future design ideas on how to spruce it up."

Other changes include nerfs to healing for Ana, Deckard, and Abathur. Nova has had her sniper build tweaked, Hanzo has had some of his synergies adjusted, and Genji's base attack has been reduced to round out some of the more noteworthy changes.

Lastly, as teased back at BlizzCon, the voice of Heroes of Storm, Creative Content Lead Kevin M. Johnson, is now available via the Cloaken Announcer Pack.

It's time! A new announcer, Cloaken, is now available to spice up your games. 🎉 https://t.co/jD6o4Ava8D

For more on Wednesday's Heroes of the Storm update, be sure to brush up on the full patch notes.