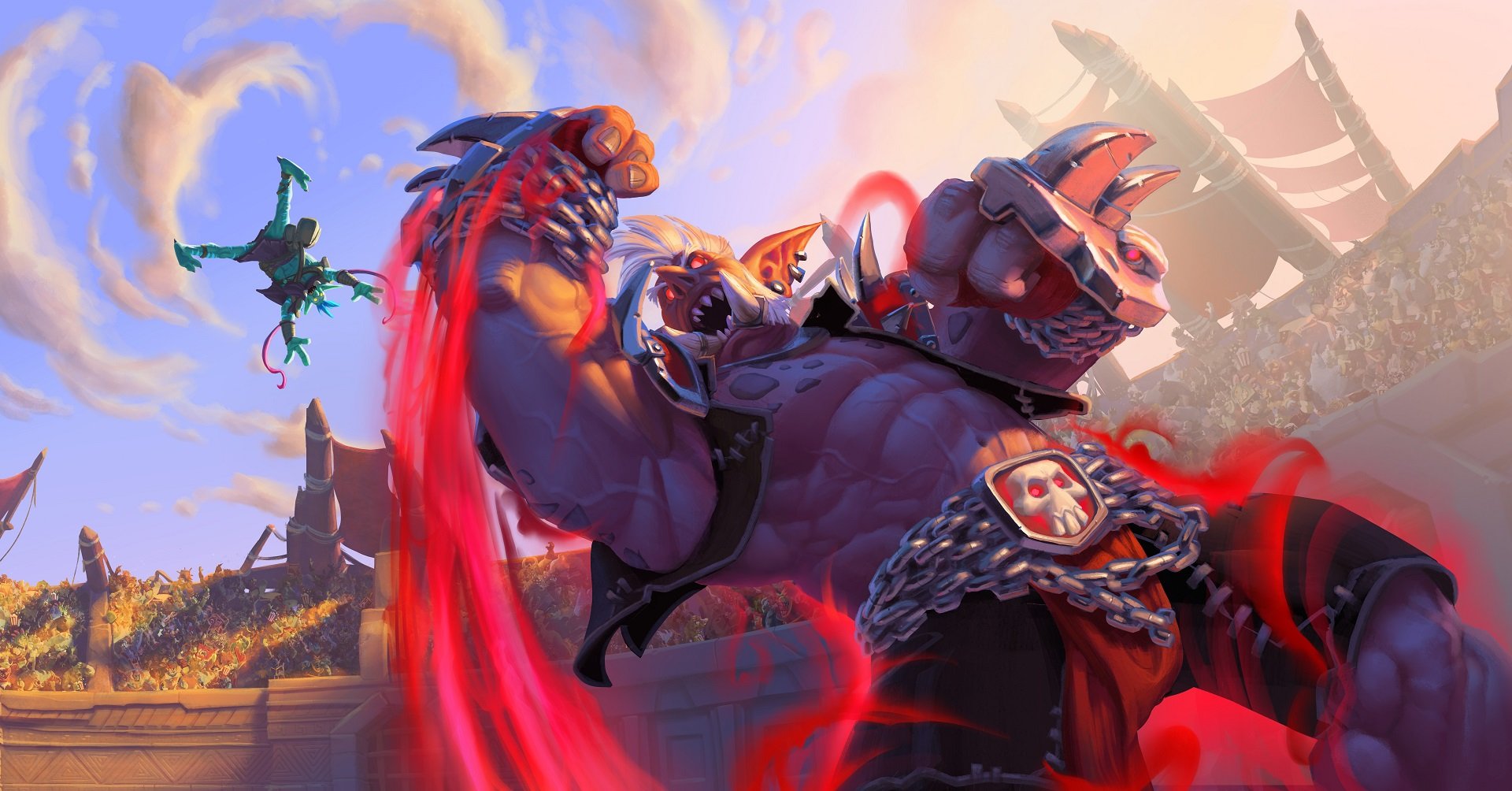 Shacknews is normally breaking these cards down one-by-one. But with the Thanksgiving holiday last week and with Blizzard's accelerated card reveal schedule, we're going a little bit out-of-order today. Wednesday saw the release of Rastakhan Rumble's final cards, live on Twitch. So we're going to offer a quick breakdown of those cards immediately.

Before going any further, let's check out what we've analyzed to this point:

Now that we're all caught up, let's look at the cards revealed today.

Analysis: This is a reverse King Mukla (or a cheaper Mukla, Tyrant of the Vale, if you prefer), offering the player two 1-Cost Banana spells. Its stats aren't great, but nobody's playing this thing for the stats. They're playing it for the fruit.

Priest players are going to get great use out of the Bananas if they're played alongside Lyra the Sunshard. They can also boost valuable Rush minions to give them a little extra kick.

Wild Mage players will like getting the early game Bananas to play alongside Flamewaker and get those damage boosts.

Analysis: This is a serious drawback for a Turn 1 weapon, but should the Paladin player draw this early, it'll allow them to stand up to most early-game minions. Losing 5 health shouldn't be too bad, because it now becomes worthwhile to play Benevolent Djinn on Turn 3.

I wouldn't expect too many Paladin players to go with this as a Turn 1 play. If the idea is to get the Benevolent Djinn out there on Turn 3, Crystallizer is a better opening turn gambit.

Analysis: This is a case where things can get out of control quickly, if the Warlock player is left unchecked. Zoo decks might want to consider deploying this guy if the situation calls for trading those minions in. Sneaky Warlocks can clear both sides of the board with Defile, which can do some serious damage.

It's also a big body for Arena, though it won't be along the same tier as Furious Ettin or Sated Threshadon.

Analysis: Remember the good old days when Execute used to cost 1 mana? Yeah, that's not a thing anymore, because that was broken. It was nerfed for a reason.

And... there is no good answer to that. Just use Shield Slam instead.

Analysis: This one should look familiar. It's basically a miniaturized version of Primordial Drake. It loses points for not having a Taunt property, but it should be a solid replacement once Primordial Drake rotates out into Wild. Of course, there can be a big difference between one damage and two damage, so it won't clear off quite as many zoos are one might hope.

Warriors, who are getting a lot of dragon synergy this expansion, may want to keep an eye on this, because it can help trigger a lot of their damage-trigger minions, like Grommash Hellscream and Rotface.

Analysis: Whoa... this is some serious value here. Two mana could potentially add two powerful dragons to your hand. And out of that dragon pool, a lot of those could be wildly powerful. It shouldn't be too hard to pull up an Ysera or a Deathwing. Even a low-roll Faerie Dragon is still value.

There's almost no downside to adding dragons to your hand. And it should help trigger Smolderthorn Lancer and War Master Voone.

Analysis: Hey, remember Big-Time Racketeer? He was a jerk, because he poisoned the RNG pool for 6-drops.

Now meet Former Champ, who's here to do the exact same thing for 5-drops. He'll drop in a 5/5 Hotshot, which certainly isn't bad for Arena. But if you're playing constructed, be careful about using something like Unstable Evolution, because you don't want to end up evolving something into this guy or Furbolg Mossbinder.

Analysis: This is going to be on the lower end of Hunter weapons, though given how easy it is to trot out a Hunter beast, getting that extra Durability shouldn't be much of an issue.

It should be noted that this is one of the first even-Cost Hunter weapons. That means players looking to experiment with Even Hunter decks will now have a weapon to pack in. It shouldn't be a big part of the new meta, but it's a fun idea to think about.

Analysis: This is a neutral minion, but there's really only one class that should even consider this in constructed and that's Priest. Mosh'ogg Enforcer's 2/14 stats aren't going to scare anyone, but that Divine Shield could keep its stats intact until the Priest's next turn. And if those stats stay the way they are, Divine Spirit and Inner Fire should be around to finish. Of course, this kind of combo Priest already has an ample number of minions to choose from, so maybe this shouldn't be their first choice.

If you pick this up in Arena and can keep it in one piece, try and draft a Crazed Alchemist for the wombo combo.

Analysis: The effectiveness of Serrated Tooth will ultimately depend on how many minions are available. This could be one of those weapons that's either as bad as it looks or sneaky underrated. The jury's out on this one for me, so I'll pass on analysis of this for now.

Analysis: The Loa and the Spirit for the Hunter look exceedingly strong and could do some seriously heavy damage. That's especially the case if they're played in tandem.

However, this is a conversation we should have a little bit later today, in greater detail. Stay tuned.

That's all for now. We're back on our normal schedule tomorrow, but look out later today, as Shacknews returns with our guide for the Hunter Loa, Spirit, and Champion. Hearthstone: Rastakhan's Rumble is set to release on December 4.

How to play Phasmophobia