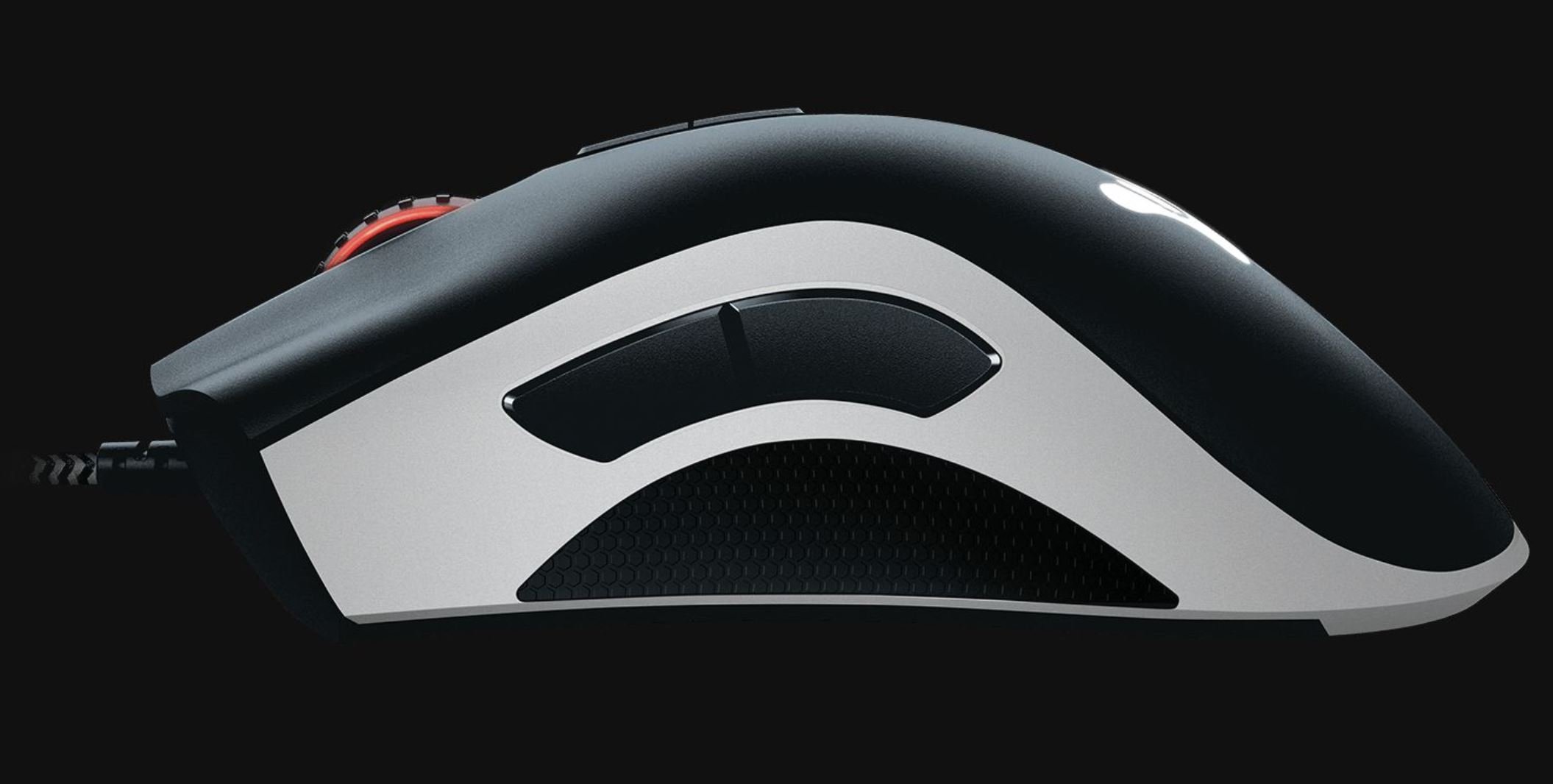 For PC gamers, the choice of mouse is highly subjective. Everyone’s hands are different sizes and shapes. Some folks are better with their left hand (weirdos, IMO) while others game using modified claw grips. There is no single perfect mouse for all use cases, but most would agree that at a bare minimum, a mouse should enable the user to execute their intentions and feel good in the hand. The Destiny 2 Razer DeathAdder Elite is rather simple compared to competing gaming mice, but it gets the job done and offers an aesthetic that nicely compliments the popular trend of black and white builds, even if Destiny 2 is not your bag.

Unlike the Razer Basilisk I reviewed earlier this year, the Destiny 2 DeathAdder Elite doesn’t offer any gamer-specific bonuses or gimmicks that promise to give you an edge over the competition. It has an exaggerated, Intellimouse-style shape with two main buttons and a wheel, along with the standard set of thumb buttons. A DPI selector rests just behind the wheel for on-the-fly adjustments during the heat of battle. Unlike the regular DeathAdder Elite, this version has a black and white paint job and a backlit Destiny logo on the palm rest.

The mouse is plastic with a smooth satin finish and has a rubber grip that rests just under buttons 4 and 5. Those buttons are large and easy to reach, without being in a position that leads to misclicks. The backlight inside the wheel and under the Destiny logo can be customized via Razer’s Synapse software suite. The wheel uses a red light by default and I was able to quickly set it to white to match the palm rest light. The Destiny 2 Razer DeathAdder Elite also has a braided cable that features a black and white pattern. The cable is light and easy to move around. Unlike some other mice I’ve tested, the cable doesn’t seem to have any memory and will pretty much lay however you like, preventing it from getting in your way during gaming sessions.

The mouse uses the same optical sensor as the regular DeathAdder Elite and gave me zero issue with tracking across a few different surface types. While the Razer Synapse software offers surface calibration, I found the Destiny 2 Razer DeathAdder Elite capable of consistent tracking across multiple pads and my desk surface without the need for software adjustment. Unlike the last few Logitech mice I’ve tried, this Razer seems comfortable with being put to work on any surface. I am by no means a pro gamer, so I am no authority on how this sensor handles quick lifts and drags, but I’d be surprised if it couldn’t deal with top-tier use cases.

I do have a few issues with the Destiny 2 Razer DeathAdder Elite. I was unable to get it to work with the UEFI BIOS on my motherboard, regardless of the slot I used. I swapped it out for other mice I had handy (including other Razer mice) and those models worked just fine. I’ll chalk it up to one of those random quirks of PC hardware. I’ve written previously about my issues with the Razer Synapse software suite, but in short, I feel it is too bloated for the functionality it offers and found myself annoyed at popups I had on my system each time the mouse was plugged in or if I took a major Windows update. After installation, it sets itself to start with Windows and I don’t feel like it offers enough to the end user to justify eating up any amount of resources on a 24/7 basis. Thankfully, any changes you make to the mouse seem to hold fine after you uninstall the software.

As a person with rather large hands, I love the shape and size of this mouse. The contours on the main buttons just feel “right” and this is probably the most comfortable mouse I’ve found for myself.  I’ve used DeathAdders in the past, but they always developed the double-click problem. Supposedly this issue has been corrected in the modern DeathAdders and the Elite editions and I had zero problems with clicks while using this particular model. I’d feel comfortable recommending this mouse to anyone who has larger hands or those who roll with palm grips. The color scheme matches wonderfully with my build and I’ll be using the Destiny 2 Razer DeathAdder Elite as my main until a better option makes itself available.

This review is based on hardware purchased by the reviewer. The Destiny 2 Razer DeathAdder Elite is available for Windows, Linux, and OSX. It carries a MSRP of $79.99.