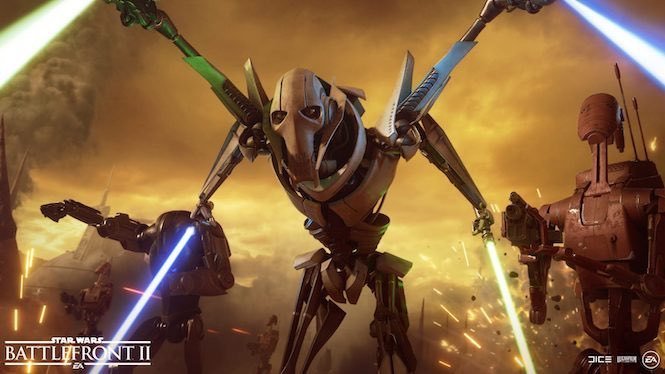 DICE has announced that the villainous General Grievous will be making his way to Star Wars Battlefront 2 as part of a free update planned for October 30.

Just in time for Halloween, you can take on your enemies as the nefarious General in-game with several new abilities for Star Wars Battlefront 2. In the official blog, Grievous is announced to have the Thrust Surge attack, which sends Grievous thrusting forward with all four of his lightsabers poised in a stabbing motion that can deal damage to to the target and also throw them to the ground.

Unrelenting Advance finds Grievous using a spinning lightsaber out in front of him that shoots out sparks that can both block oncoming attacks and damage anyone who gets too close. Meanwhile, his Claw Rush ability lets him escape when needed, putting him down on all six limbs as he makes a mad dash forward, pushing enemies away and doing real damage to those in his path.

When Grievous drops as part of the new update for Star Wars Battlefront 2, we'll also get Clone Wars playlists for Hero Showdown and Heroes vs. Villains in addition to changes to Hero Health Star Cards. If you're interested in playing, check out Star Wars Battlefront 2 on PlayStation 4, Xbox One, and PC now.