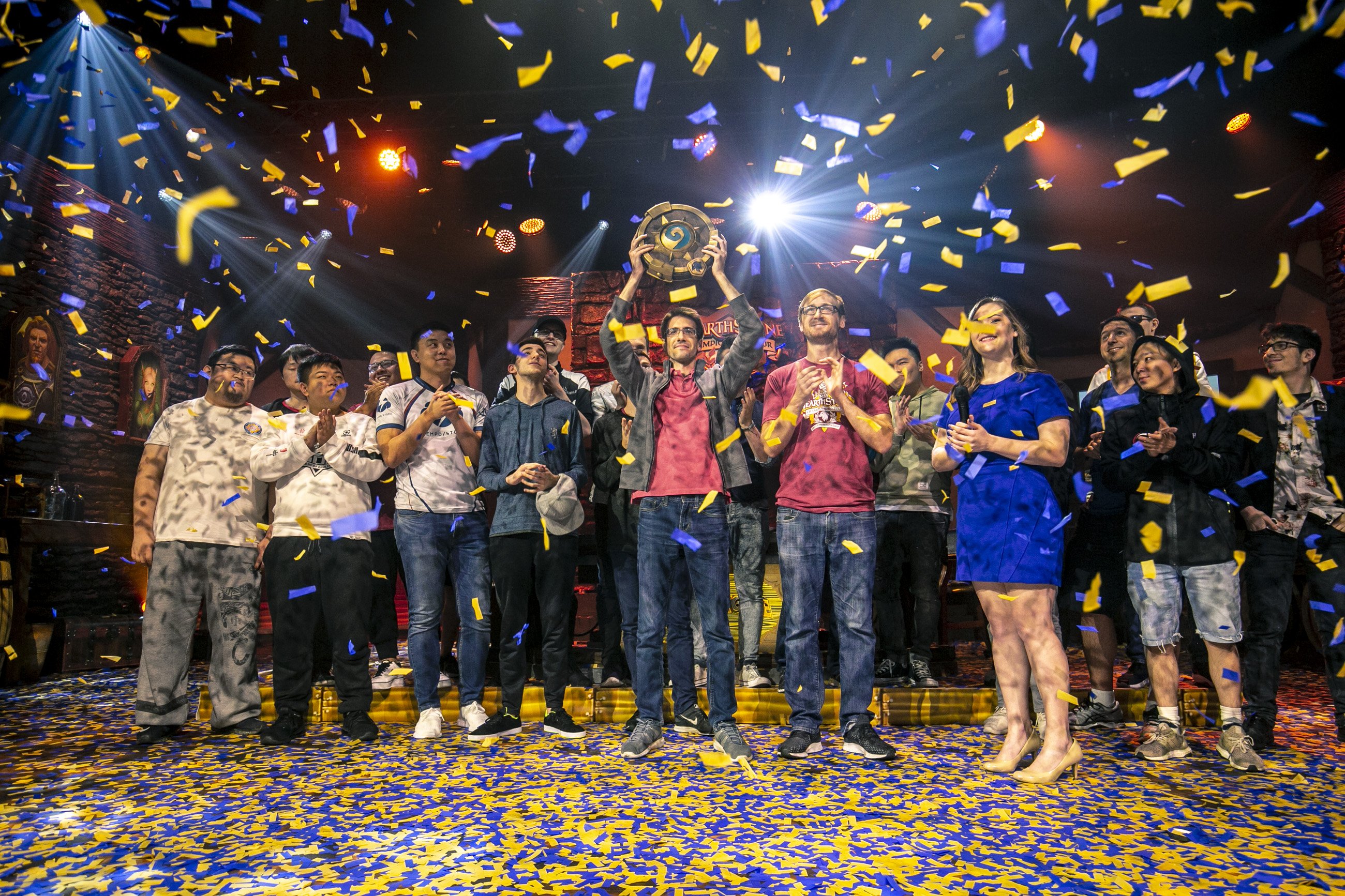 Hearthstone - The Winners and Losers of the 2018 HCT Fall Championship

The Hearthstone Fall Championship came to a close over the weekend, with four more names being added to the 2018 Hearthstone World Championship lineup. The full weekend was filled with some high IQ Hearthstone play, a lot of psychological warfare, and yes, some rolls of the RNG dice.

Shacknews was watching the action first-hand at the Blizzard Arena in Burbank, CA. We watched as Canada's Mihai "languagehacker" Dragalin emerged as the HCT Fall Champion, following an intense series of games against some of the game's top players. But while Shacknews was viewing the action with an esports focus, as is always the case, we also watched the tournament unfold with the everyday Hearthstone player in mind. With that said, we're here today with some of our biggest winners and losers of the HCT Fall Championship.

There's no doubting that the among Druid players, the Malygos Druid is almost always going to feel like the sexier pick. There's a sense of security that comes in knowing that key combination cards can assure a one-turn kill in nearly every instance. But the Malygos Druid wasn't the big winner of the weekend. Instead, it was a different Druid deck.

Taunt Druids proved that big bodies will often win the day and if there's a board full of them, there's little that can be done to stop them. Taunt Druids operate on the principle of using Hadronox and an activator like Naturalize or Carnivorous Cube to resurrect any friendly Taunt minions used this game. Few decks had any counters for this strategy (with one big exception that we'll touch on later) and only quicker aggro decks were able to really get anything going against this deck.

The Druid simply has too many Armor tools that allow it to survive until the critical Hadronox play and not enough of the opposing decks packed hard counters, like Hex or Cornered Sentry, to poison the Witching Hour's well. That meant Hadronox could just keep coming again and again, allowing the Taunt parade to continue uninterrupted.

As mentioned, Malygos Druid has the potential for Exodia-style one-turn kills. It has more tools than ever, thanks to the addition of Dreampetal Florist and Flobbidinous Floop. The temptation to pick this Druid archetype above the others is great, given this deck's success rate.

The trouble at this year's HCT Fall Championship was that the deck was simply too slow. It struggled mightily to maintain a pace against aggressive Odd Rogues or the Recruit Hunter's multitude of 5/5 Devilsaurs. The Druid players would often be forced to play Floop early to maintain tempo. Worse yet, the Dreampetal Florist offered little in terms of tangible rewards, many times discounting the wrong minion. If it did discount Malygos, it would come after Slash and Moonfire were already burned in an effort to maintain control.

Overall, this was a tough weekend for the methodical Malygos Druid, as it often hit one too many walls against dreaded anti-control lineups.

Of all the fringe decks that showed up to the HCT Fall Championship, many dismissed Roman "RENMEN" Kudriavtsev's Cubelock. In the ever-evolving Hearthstone meta, this deck felt like a relic. It was so two metas ago. All of that is still true, but RENMEN proved that high IQ play can make a lot of decks that don't look so good on paper into world beaters.

The Cubelock looked to be a terrible matchup on paper against eventual winner languagehacker's Taunt Druid. As noted earlier, the Taunt Druid had a great weekend warding off aggressive decks with walls upon walls of Taunt minions. And since Cubelock relies on aggressive pressure, it looked to be down and out before the game even started.

But what if RENMEN didn't approach his Cubelock like a normal Cubelock?

Seeing what he was up against, RENMEN thought outside the box and immediately dropped a Spiritsinger Umbra and used his Faceless Manipulator to make copies of languagehacker's Carnivorous Cube. This immediately spawned two Hadronoxes for himself. Those Hadronoxes would then spawn multiple Voidlords and Voidwalkers, preventing languagehacker from making any pushes while he sank further and further into fatigue.

Just when languagehacker thought he could make a little more progress, RENMEN came right back with Prince Taldaram, creating a 3/3 copy of languagehacker's other Carnivorous Cube and creating even more Hadronoxes for himself. The Taunt Druid's strategy had been completely turned around on him and languagehacker was forced to submit, due to fatigue.

RENMEN would ultimately fall short in the series, but his Cubelock play proved that high-level Hearthstone is more than dumb luck. There's high skill involved in not only knowing what your own deck is capable of, but in knowing how to turn the opponent's own deck against him.

We saw a lot of great potential in Eden "Hatul" Zamir's Odd Warrior, going so far as to label it one of the decks to watch. Unfortunately for the Israeli player, the rest of the field saw that, too. This Odd Warrior isn't here so much because of its results, but because it saw no play over the weekend. Sensing the threat that it posed against Odd Rogue and Malygos Druid, Hatul's opponents made sure to ban the Odd Warrior at every opportunity.

That forced Hatul to try and win with some of his other fringe decks. That didn't quite work out, with his Control Priest proving to be a particularly weak link. It got bopped hard against the Deathrattle Hunter, in particular. The Devilsaur Eggs meant the Duskbreaker effect was an active liability, while Shadowreaper Anduin never really had a chance to get online.

Hatul does have what it takes to get father. In the post-tournament press conference, all of the Top 4 players praised him for having the foresight to bring Odd Warrior. David "JustSaiyan" Shan led the group, saying, "Only Hatul had the balls to bring Odd Warrior." They knew how well the deck stacks up against some of the current meta's best.

But Hatul will need to reevaluate the rest of his decks to reach the next level, because outside of the Odd Warrior, he wasn't able to get much else going this weekend.

In the current Hearthstone meta, Mossy Horror has proven to be an effective tech card. Its main use has been to keep Giggling Inventor under control. (Although that may not be much of a problem going forward.)

Meanwhile, languagehacker made the case for why Mossy Horror won't be going away, even after the Giggling Inventor nerf hits. It's a prime activator for Devilsaur Eggs, giving the Deathrattle Hunter a major offensive burst. On Sunday, languagehacker was fortunate enough to draw his Mossy Horror on Turn 7, playing it nearly on curve and giving him the exact tools he needed to clinch the tournament in short order.

Mossy Horror is mostly considered a defensive threat, but with its potential to give Deathrattle Hunters the boost they need, casual players will want to remember that this minion can be a major cog to certain offensive-minded Hunter decks.

For context, let's travel back in time in Toki's time machine to HCT Seoul. That's where Sintolol faced off against JustSaiyan and… well… this happened.

Yes, JustSaiyan used Naturalize to fill Sintolol's hand to capacity, which led to him burning his Shudderwock card. With his win condition gone, Sintolol would concede out of frustration.

That incident has stuck with the German player. As the weekend's competitors were making their decks public, Sintolol made sure to make a cheeky reference to what happened in Seoul.

But hey, all's well that ends well. Sintolol did wind up winning that series and moved to Top 8, where he'd have his rematch with JustSaiyan. And this time, Sintolol brought his Even Warlock. He wasn't going to burn his Shudderwock this time! And surely, there was nothing else that he could possibly burn…

While I cited the high-skill level of top Hearthstone players, sometimes there's just bad RNG. And poor Sintolol had some bad RNG this weekend. He would go on to lose that series to JustSaiyan and just miss the Worlds cut, for now. But Sintolol is one of the top European players in the world and there's a good chance he'll make it to the World Championship soon.

But when things like this happen, the only thing to do is look back and laugh. And Sintolol was spotted chuckling over his bout of bad RNG at various points during the weekend, even smiling in the post-game interview after burning his Shudderwock. After such setbacks, the German player is keeping his head up until the next tournament. But for now, there's always World of Warcraft.

impossible to beat the script,
back to azeroth we go

What were your most memorable moments of this HCT Fall Championship? Join the conversation and let us know in the comments. For more on this tournament weekend, be sure to revisit our interview with JustSaiyan.

Sports games that need to be rebooted
Login / Register