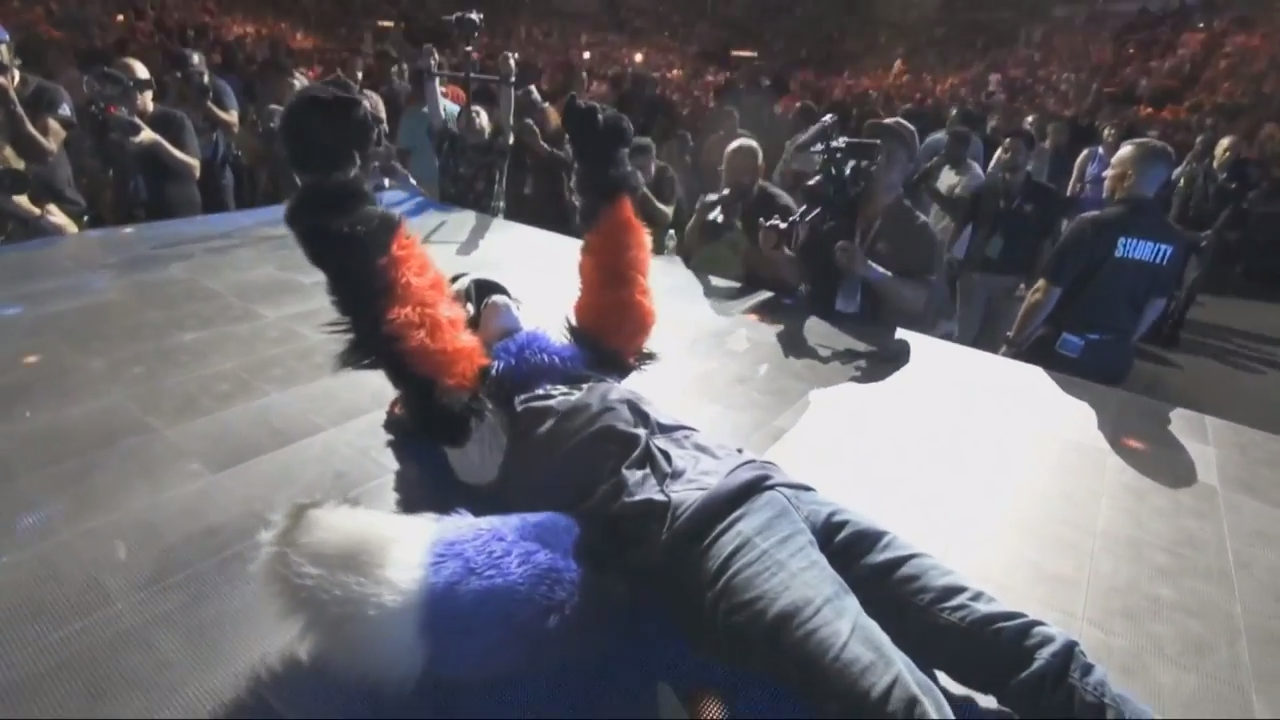 Reliving and recapping the final day of EVO 2018

EVO 2018 has concluded and the best fighting game players in the world are ready to head home for another year. But Sunday's marathon (oh, we'll touch on that in just a bit) tournament provided some incredible matches and clutch performances. Shacknews is taking some time this Monday to relive the final day of competition, from start to finish.

One of the biggest days of the year for anime fighters is EVO Sunday, since that's arguably when they get the most exposure. And Omito Hashimoto has certainly made the most of his on-screen time, showing off some of the highest level Guilty Gear play that viewers will see.

Guilty Gear was on a bigger stage this year (BlazBlue Central Fiction was the anime representative for last year's EVO Sunday), but the massive crowd in the arena and watching at home didn't rattle Omito in the slightest. He not only defeated Masahiro "Machabo" Tominaga in Grand Finals, but he did so quickly. The casters calling the action were even seemingly taken aback by how quickly Omito went up 2-0. But this year's EVO champion wasn't getting paid by the hour, as his Johnny made short work of seasoned veteran Machabo and his Ky Kiske.

This year's Guilty Gear tournament is also noteworthy because it sets the table for the new ArcRevo World Tour, which will organize anime fighters into a full-blown esports circuit. But if Sunday is any indication, it's going to take a lot to topple Omito from the Guilty Gear side.

Anyone who has followed the professional Super Smash Bros. Melee scene over the past decade is familiar with the Five Melee Gods: Armada, Hungrybox, Mang0, Mew2King, and PPMD. Outside of those five names has always been William "Leffen" Hjelte, a brash upstart looking to carve his own name among the best. If the Five Gods were considered an "A" grade, Leffen was considered a solid B+.

But Leffen was all aces on Sunday, as he not only won Super Smash Bros. Melee, he did so convincingly. He had little trouble dispatching some of the top names in the world, including defending EVO champion Adam "Armada" Lindgren. The two are some of the best Fox players in the world, but Armada's Fox was thoroughly outclassed on Sunday. Armada made one last desperation switch to Peach, but Leffen wasn't going to be beaten on this day.

But the victory that leaves Leffen the most satisfied is his Winners Semifinals win over Juan "Hungrybox" DeBiedma. The two are the most bitter of rivals, with Leffen particularly taking repeated shots at Hungrybox and his Jigglypuff play on social media throughout the past few years. After dropping the first game, Leffen settled down and didn't look back for the rest of the tournament.

For Leffen, the EVO victory represents the peak of a years-long journey to the top of the Melee scene. He's undergone numerous setbacks, the biggest of which was the denial of his visa in 2016. Despite this and despite his personal anxieties, Leffen was able to overcome and reach the top of the mountain.

Melee was always an outlet for everything negative in my life, and when I was no longer depressed or without a visa, I also lost a lot of fire.
The fact that I can be the best without being miserable means so god damn much to me. I really didn't think I could until recently.

What's next for Leffen? Keeping a promise and shining a light on the Smash Bros. scene's small prize pools, even for those who make the Top 8.

If they won't take it ill give it to a charity of their choice.
A big part of my prize money with is going to taxes but I want to give a significant part of it to charity or back to the community in some ways.
What can I say, Lebron inspired me.

One of the big stories for Tekken 7 was LowHigh's tournament victory, beating last season's Tekken champion Byung-moon "Qudans" Son. But the American Tekken fans in attendance throughout the weekend won't forget Terrelle "Lil Majin" Jackson, who almost saw the American dream through to the end.

In a pro scene dominated by South Korean and Japanese players, Lil Majin was the last American player standing. But he certainly earned his place at the Top 8. He took out some heavy hitters in the semifinals, including Takumi "Noroma" Hamasaki (9th in the TWT standings) and the red hot Sang-hyun "JeonDDing" Jeon (2nd in the TWT standings). This led to the Top 8 matchup against Hyunjin "JDCR" Kim, which is being called one of the most exciting Tekken sets of the year.

Tekken 7 is known for a diversely powerful roster, but it was still fun to see Lil Majin make this run with King. Tekken's favorite wrestler proved that he can hang with the game's strongest characters, as Lil Majin put on a show with powerbombs, backbreakers, and crushing slams that often broke the stage and opened the door to bigger combos. The charismatic wrestler and the man behind that grappler will make this EVO run one to remember.

Shenron Can't Save You Now

Dragon Ball FighterZ has been out for roughly six months, but it already has a rivalry for the ages. Dominique "SonicFox" McLean and Goichi "GO1" Kushida have been trading blows for most of the game's life cycle, clearly the pro scene's 1 and 1A. Their battle at EVO did not disappoint and proved every bit as intense as their clashes that came prior.

But the moment that everyone will remember is Goichi using the power of the Dragon Balls to summon the dragon Shenron, down 0-2 in Winners Finals.

The dragon's appearance brought the crowd to its feet, as Goichi pondered his wish. He ultimately decided on restoring his Vegeta's health, but it would prove to be a costly wish, as SonicFox would be undeterred. SonicFox would keep up his offensive onslaught and take the Winners Finals in a 3-0 sweep.

If that wasn't enough, Goichi was able to summon Shenron a second time, this time in the second Grand Finals set.

Again, Goichi would opt to restore his health. And again, SonicFox would keep up the pressure and ultimately emerge victorious.

It speaks volumes that SonicFox could overcome the power of the Dragon Balls themselves to win this tournament. It also made this face-off with rival Goichi their most memorable meeting to date.

And for Goichi... well... at the very least, he certainly understands Dragon Ball Z lore.

Vegeta WOULD restore his health instead of bringing back a friend. That’s canon.

Street Fighter Has a 'Problem'

Remember Capcom Cup 2017 back in December? Remember the sudden surge in young players that I talked about after that tournament was over? One of the names I talked about was Benjamin "Problem-X" Simon, active since 2012, but a name that has broken out over the past year. The rest of the Street Fighter pro scene urged viewers not to sleep on Problem-X, a more recent example coming before the ELEAGUE Street Fighter V Invitational. He walked into EVO 2018, still with loads of potential. By the end of Sunday, he realized it.

Problem-X has fully mastered Bison, not overusing the characters teleports, but knowing when to utilize them in order to maintain pressure on his opponents. If anyone gets too close, he'll keep them at bay with Bison's scissor kick. And of course, there's that V-Trigger I that gives him an open door to further pressure his opponent with a safer Psycho Blast and head stomp.

Simon finished the 2017 Capcom Cup tournament in 7th place, but it felt like he had room to go much farther. On Sunday, he proved that he'll be one of the men to beat in this year's tournament. The Street Fighter pro scene has four months to master the current meta, along with two new characters, and prepare for Capcom Cup. But the game's top players will have a big Problem ahead of them, as Benjamin Simon shows no signs of slowing down with either his Bison or his Abigail.

What was your favorite moment from Evo this weekend? Join the conversation and let us know in the comments.