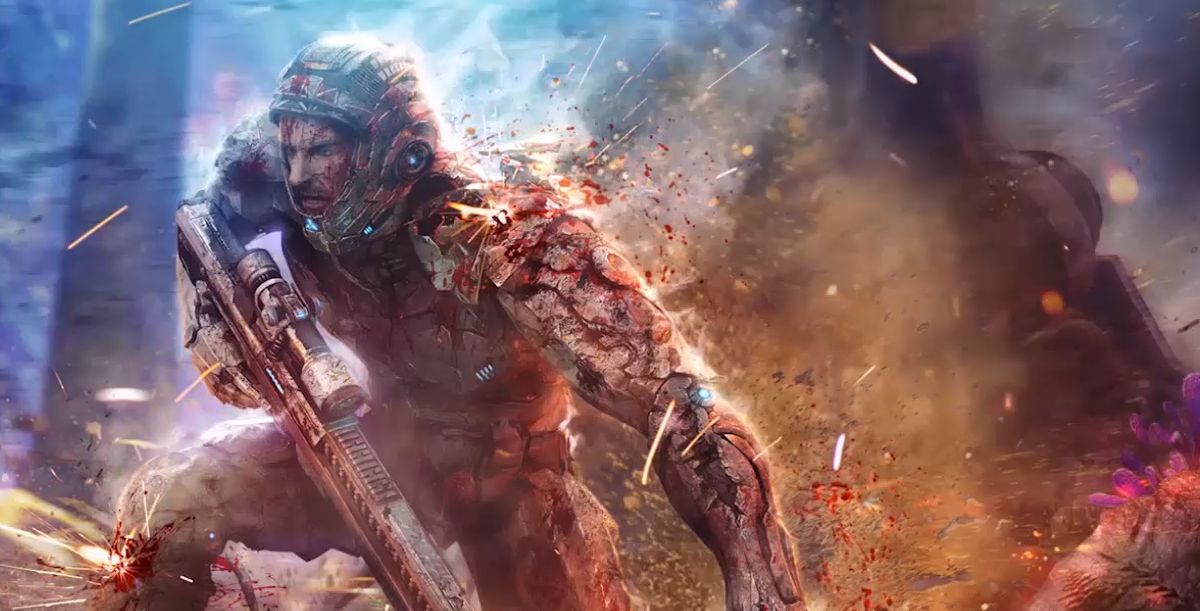 Getting immersed in a dense and vibrant science fiction or fantasy is the dream when it comes to the potential of virtual reality. Seeking Dawn, developed by Multiverse, is an opportunity for this where we step into the shoes of a soldier, or soldiers, exploring a hostile planet far from our own solar system. While Multiverse does a wonderful job of crafting a beautiful, science-fiction world for us to explore, it handcuffs that experience to gameplay mechanics that dull all the excitement.

Where No Man Has Gone Before

Seeking Dawn’s rhythm involves moving to objectives, crafting weapons and tools for your base, taking on increasingly difficult enemies, and keeping your character in good health. Shooting is the best part of the experience. The weapons feel good and look good while you're taking on creatures or troopers. Selecting the weapons can be clunky, but more on that later.

Another major strength of Seeking Dawn is the visuals. It puts VR competitors to shame. Also, when compared to other VR games, the world felt alive. The subtle addition of non-confrontational creatures made the place feel vibrant with life. The subtle breeze that seemed to be constantly wafting over everything also gave the area a sense of life. The scale of everything impressed as well.

On my graphics card, the NVIDIA GTX 1060 3GB (970 is minimum and 1070 is recommended), the game stuttered occasionally. When it works, though, it’s arguably one of the best looking VR games. Period.

I’d played earlier builds of the game before and never came in contact with crafting or survival mechanics, so their addition to the game was a bit jarring for me at first. Initially, it was in a good way. It kept me on my toes and the idea of progressively setting up my own base was appealing. Then, I started gathering resources.

Houston, We Have A Problem

The tools that you use to secure the resources you need are well built and fun to use, but the inventory system felt a built clunky and overwhelming at times. With the need to actually maneuver my hands to make selections, I expected things to be simpler, but I would mistakenly equip the wrong thing, and quick-switching was pretty much non-existent.

Identifying the resources you need to gather with those tools is, unfortunately, a chore. The main problem is that the environment has the same color palette spread throughout it and there’s little difference between “this” rock that supplies me with nothing and “this” one which actually works with the farming tools. By making the resource gathering tedious, this makes the crafting increasingly so as items become more scarce the longer you play. The survival aspect, where I need to keep my character fed and watered, annoyed more than it enhanced the immersion.

Along the way, you gather audio logs as you come across the remnants of the unit sent to this hostile planet before you. It’s an interesting way to evolve the story and it works within the game’s world, but it’s pretty clear that the narrative isn’t the focus. That’s also reflected in the character voices, which is underwhelming.

Comfort wasn’t an issue very often, other than the moments when the screen stuttered. The game features a couple locomotion options and I used full locomotion with a toggle for sprinting. The game and full locomotion kept the action in front of me for the most part which helped with my limited space for movement.

Seeking Dawn has evolved into a much more dense game than what I played in earlier builds, but I found myself craving the lighter experiences from before. The survival management, resource gathering, and crafting are great additions on paper. In execution, there’s a lack of balance that doesn't take into account the differences between playing while sitting and looking at a screen versus using a lot of movement under a VR HMD. The ideal way to play Seeking Dawn is with a friend or three. Teaming up helps with the tedium of gathering resources and taking on the enemies together is fun.

It’s a shame that Seeking Dawn didn’t perform as well as I hoped, especially with the production values through the roof. Multiverse clearly has a firm grasp on creating worlds within VR. Hopefully, their next experience will trim the fat and give us the lean adventure VR game the team is certainly capable of delivering.

This review is based on a code provided by the publisher. It was played on the Oculus Rift with Oculus Touch controllers. Seeking Dawn is available now for $19.99 on Steam and can be played on the HTC Vive as well. Check out our many other reviews from the Shacknews team and stay tuned for more.