Octopath Traveler, the newest release from the crew at Square Enix, is known for featuring eight different characters set across eight distinct job classes. With that said, players will soon notice that not all jobs are available to all characters toward the start of the game. Instead of being unlocked immediately, those secondary jobs must be earned by locating shrines spread about the continent of Orsterra, often in out-of-view areas. The Apothecary job in particular is unlocked by discovering the location of the Shrine of the Healer, and fortunately for players, we know just where to find it.

Where to Find the Shrine of the Healer

The Shrine of the Healer can be found toward the southern end of the map, outside of the town of Saintsbridge, accessible from the junction known as East Saintsbridge Traverse. From the save point and signpost at this junction, walk due east, beyond the rocky outcropping blocking view of the path, to discover a cave that serves as the entrance to the shrine.

Once within, continue down the path to the right, turn north to climb the stairs, then approach the altar. The group of heroes will hear the disembodied voice of Dohter the Charitable, who will recognize the party's boldness in reaching the shrine. Dohter will then make an offering to the party by unlocking Apothecary as a secondary job class, at which point all heroes can take advantage of the Apothecary attribute bonuses and begin the process of creating and using various concoctions. 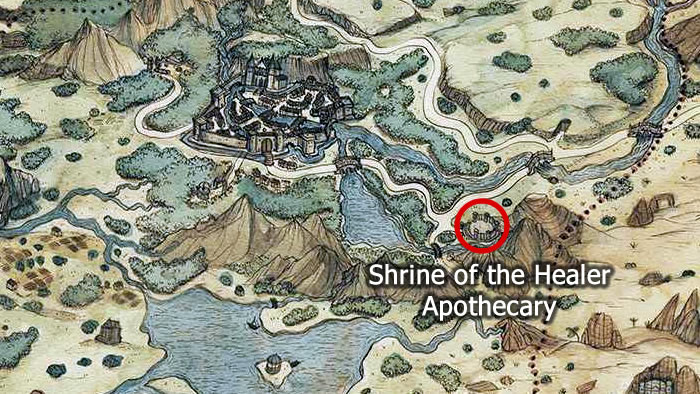 There are seven other shrines that players must visit in order to unlock each of the core job classes in Octopath Traveler. To learn where each of these shrines can be found, head over to our guide to all shrine locations in Octopath Traveler.  Players curious to learn more about Square Enix's latest RPG sensation can check out our Octopath Traveler strategy and guide hub, which not only details each shrine location, but also gives loads of information regarding job classes and skills, characters, boss strategies, and more.