Magic Leap One, the futuristic augmented reality (AR) glasses that look like a glimpse into the future, was shown off today via Twitch livestream with a quick overview of the system in a bid to give developers additional information on how better to create content for the fledgling platform. Though it was mainly meant to inform creators on how best to utilize the new HMD when working on new content for the headset, it also brought in several viewers looking to see more about how the platform and its internal hardware will work.

The Magic Leap itself has three components: the headset itself, the power pack, and the controller. The glasses are known as Lightware, which fit a bit differently on your head than other VR devices. Otherwise, the power pack is known as the Lightpack, and the controller (previously likely known as a Totem during testing) ties it all together. The box comes with a charger as well, for a complete package.

The Lightpack features a single power button as well as USB-C for both power and data, with the controller rocking a touchpad with an LED ring, bumper, and trigger.

As far as the Lightware, you can personalize how the headset fits on your head, with multiple interchangeable brow and nose pads, as well as support for prescription lenses for glasses-wearers who need a little more customization for the device, since you really shouldn't be wearing your glasses under the device, anyway. To put the Lightware on, you'll pull on the back of it to expand it out further, slip on the glasses over your head, and then push the band back together to lock it. It already looks a lot lighter than other devices on the market, which is good news. 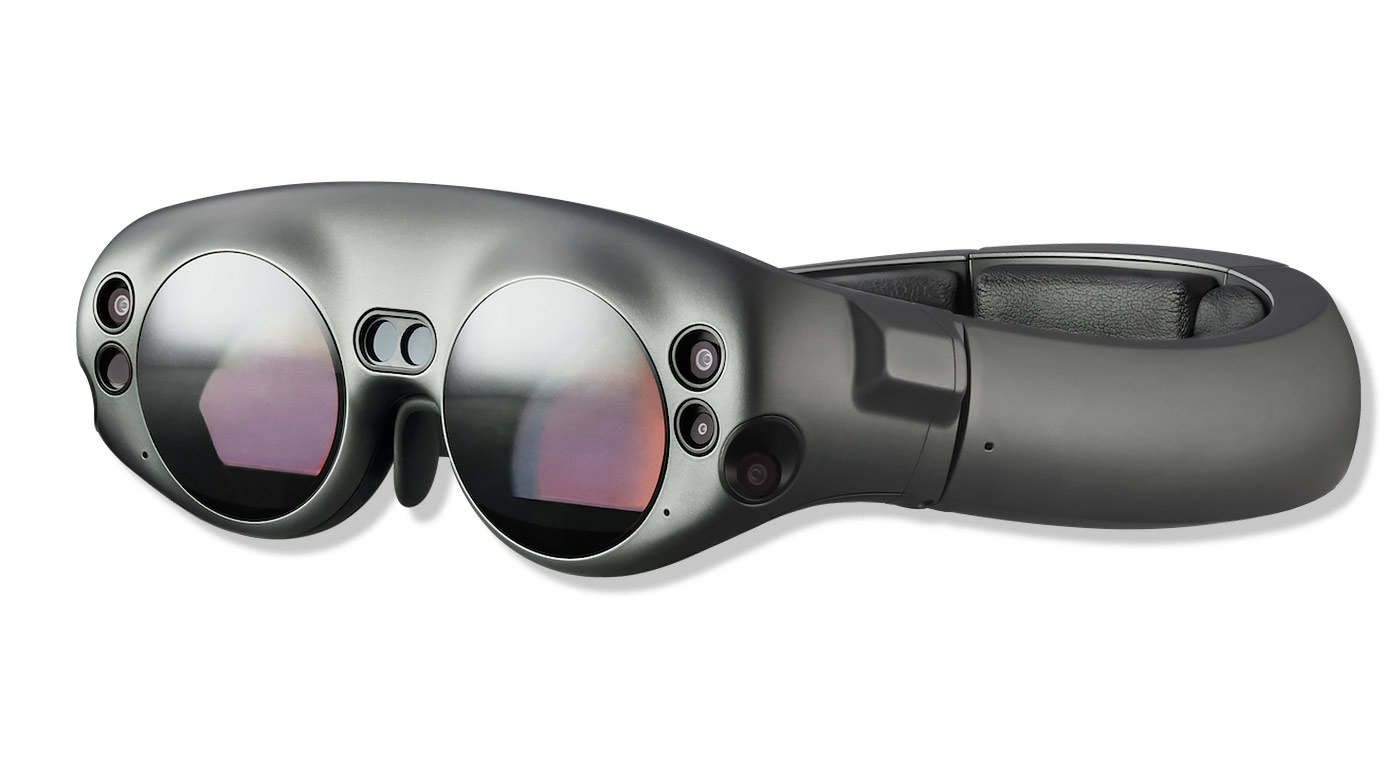 The headset can take photos with a head-mounted camera and point-of-view captrure, as well as inward-facing eye tracking cameras to assist with eye gaze tracking, which will know where you're looking at any point, and allow you to control apps as such. You can also use the 6DoF controller as well as gesture controls, voice commands and head posing, which make the Magic Leap One a boon for non-mobile users, or anyone with paralysis and other neurological disorders.

The device will come in two different sizes, standard and large, and will also feature on-HMD spatial audio for some truly unique experiences.

Interestingly enough, the Magic Leap One is designed for mostly indoor use, though the presenters didn't go into much detail as to why. It will feature several hours of battery life, we know, with multitasking that allows you to suspend applications as you see fit, with some very intriguing apps planned on the horizon. You'll access those via the Magic Leap World app hub, which wasn't shown off today during the stream.

Unfortunately, nothing was shown off in action today for the Magic Leap One other than the hardware, and additional information wasn't given about the unit's FOV, pricing, or its release date, though it's still apparently targeting sometime in 2018. What we did get, however, is a massive information dump that has us eyeing the device with a glint in our eyes. It looks like an awesome step forward for this kind of tech, but we're going to need to know a little more first before we're able to pull the trigger. Magic Leap has stated we can look forward to additional streams with more information on this coming soon, so we'll have to wait and see what comes of those next.