Dragon Quest XI is a standalone tale of an unnamed protagonist, who learns that he is the reincarnation of an ancient hero. And as a legendary hero, he ventures out to save the world from an ominous, unknown threat. While Square Enix has previously revealed footage of Dragon Quest XI at PAX East, showing off early footage of Cobblestone, Shacknews recently had the opportunity to check out something a little more recent. 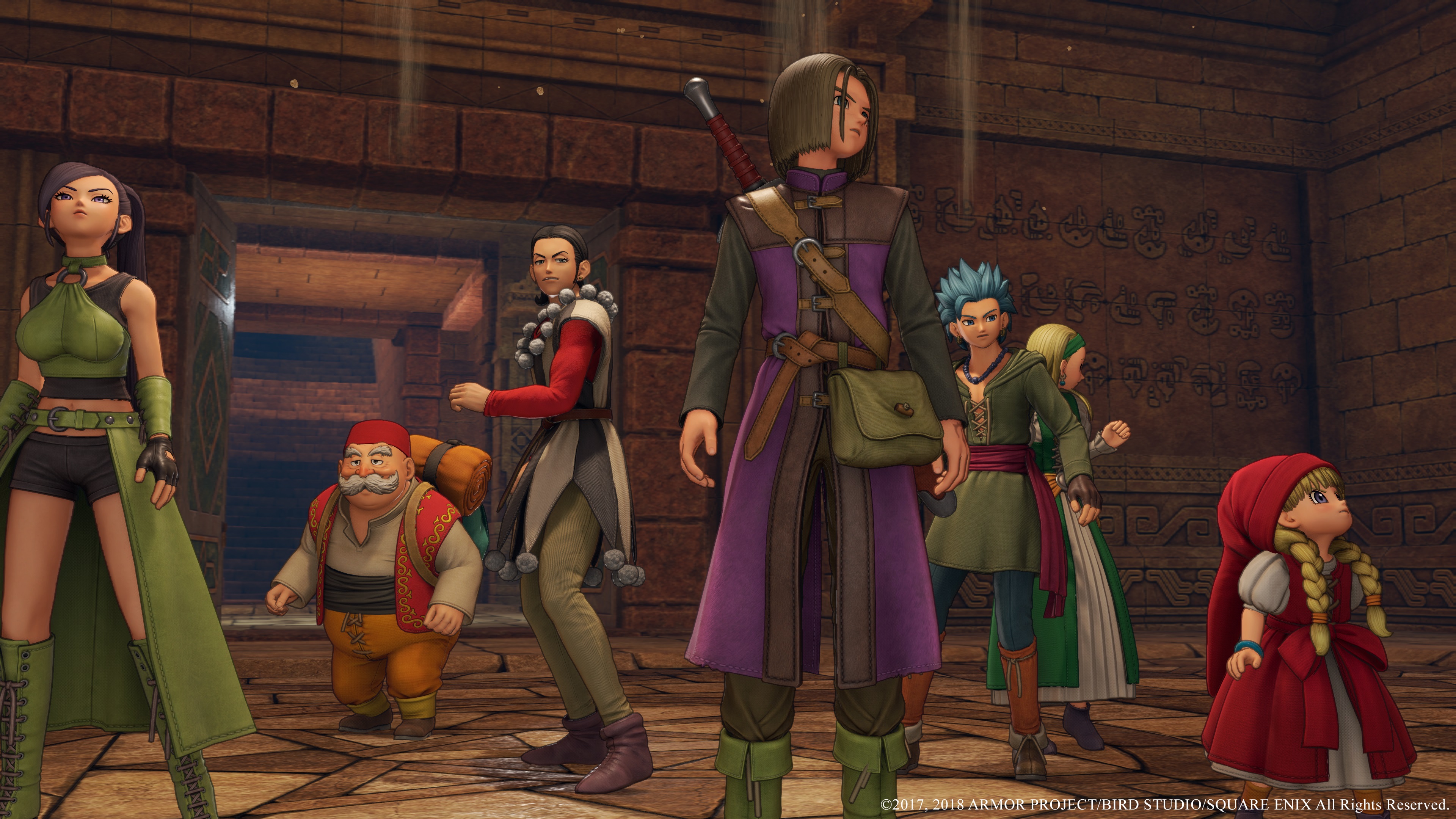 But before venturing off, it's a good time to introduce the party members present during this demo:

The mysterious hero and his party began the demo in the fields of Gallopolis, a trail filled with danger, just outside a nearby castle town. After avoiding most of the monsters, it was time to explore the town, filled with shops, inns, and stables full of horses. But while it's easy to get distracted by the horses, there is a purpose for visiting the town and that's to have a chat with the Sultan about a vital item for the main quest. That leads into the other part of this main quest branch, as the hero gets dragged into helping the Sultan's hapless son, who is looking to trick his father into believing him a worthy prince. While that segues into a horse racing side activity, it quickly escalates into a hunt for the demo's big boss.

This demo becomes noteworthy because it offers up the first introduction to Sylvando. Sylvando is a traveling performer, in town to dazzle denizens with feats of magic and trickery. He quickly tags along with the party, not so much to help the hero fill his destiny, but more because he comes across as a guy looking for a lark. Sylvando is a charismatic fellow who eventually starts to fit in with the party, despite inviting himself into the group, and is helpful on the battlefield with his blades and his agility. Sylvando enters as a fifth member of the party, but it's implied that following his initial quest, he'll eventually need to be swapped in and out to keep the party at an even four members. Having a fifth wheel in Sylvando is immensely helpful against the demo's boss, the Slayer of the Sands, which asserts itself with heavy area-of-effect attacks and hard-hitting direct attacks. 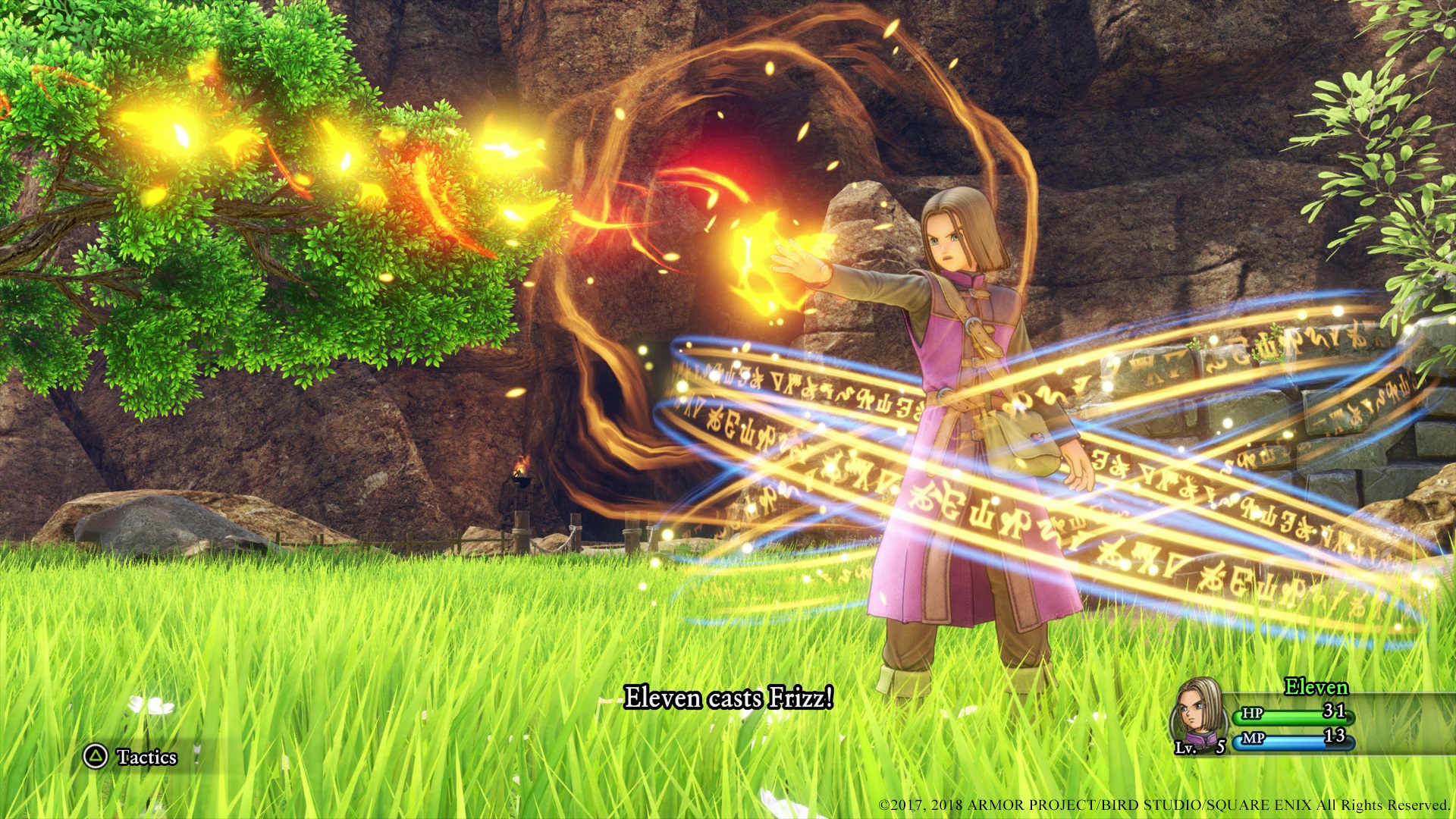 Those who have played the Japanese version of Dragon Quest XI will find that this version is no mere port. The developers at Square Enix have worked to add several quality of life improvements to the North American version of the game. One thing to note is that the art is said to be enhanced and it's hard to argue with that. Dragon Ball creator Akira Toriyama's characters look bright and gorgeously rendered, both in cutscenes and on the battlefield.

While graphical enhancements and UI overhauls are noticeable, the biggest change is the addition of the Dash button. The ability to dash is incredibly helpful for anyone looking to get from objective to objective in a shorter time, but also for anyone looking to avoid combat. The fields of Gallopolis are filled with monsters and will look to initiate a battle on sight, but many of them won't be able to catch a dashing player. It should be noted that the dash function does cut out a lot of the unnecessary filler that JRPGs are known for, but there's still a lot to do here. Even as I skipped a lot of the side content, due to time constraints, this demo still took well over an hour, between cutscenes, combat, and main quest tasks. There's a lot for fans to be excited about and plenty to keep players busy.

It won't be long before North America gets its hands on a new Dragon Age. Dragon Age XI: Echoes of an Elusive Age is set to release September 4 on PC and PlayStation 4, with PS4 getting a physical retail release.

Shack Chat: What was your favorite moment from E3 2021?
Login / Register