Have you ever wanted to be a wizard? It's certainly not a profession for the faint of heart. It's not all slingling powerful spells around all day, either. It takes talent and true courage to become a powerful wizard like those who came before you, with dozens of different spells at your disposal and difficult challenges laid out in front of you to test your abilities.

Contingent99's excellent Wizard of Legend lets you live out your magical fantasies with a colorful, frenetic roguelike that'll try you at every turn as it throws everything it has at you in a bid to test whether or not you really are worthy of the prestigious title. It's a blast, even as you're struggling at the beginning to conquer just one level or two with your starter spells, and a magnetic force that'll keep drawing you back in as you progress. In a word, it's magical. 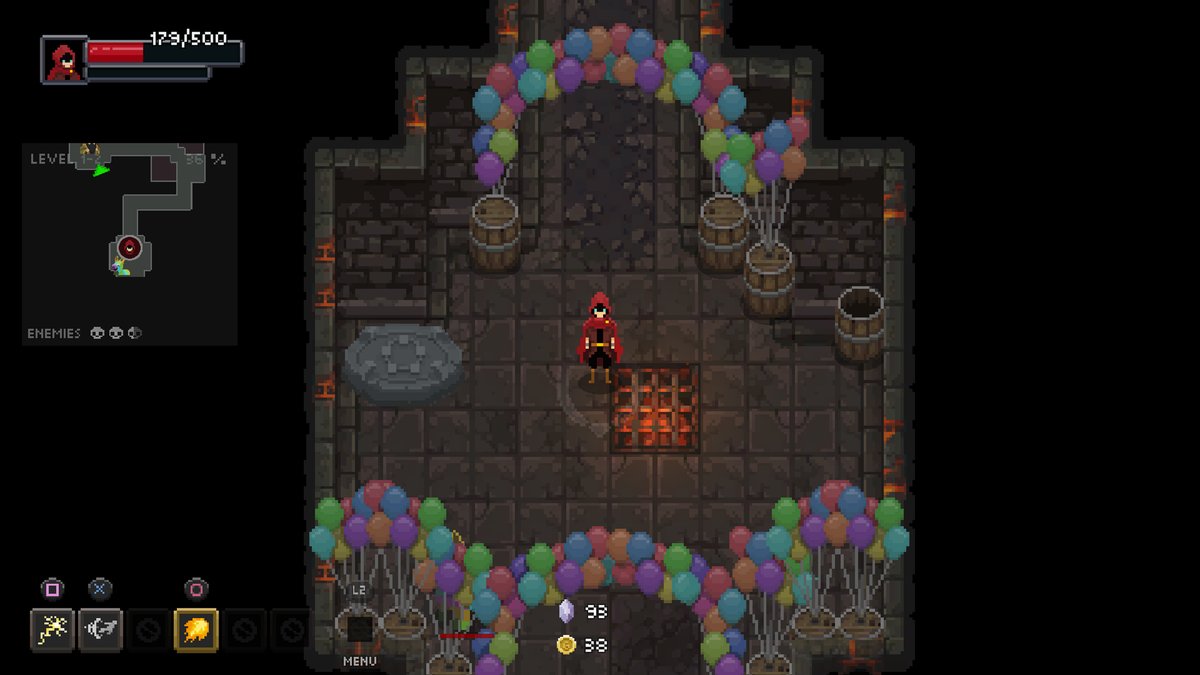 Wizards have to start somewhere, though, and you'll start Wizard of Legend as an absolute beginner. You're a nameless contender in the city of Lanova, where each year a group of the most powerful wizards in the world known as the Council of Magic hold a series of difficult challenges known as the Chaos Trials. They're held in Lanova Castle, with each of the three council members tasked with remaking one part of the castle over into a dangerous labyrinthine nightmare teeming with traps, treasures, and enemies.

After a lengthy tutorial scene masquerading as a peaceful walk through a museum depicting the Chaos Trials and some of the elemental spells known as Arcana, or magical tools created as cards to help wizards cast powerful magic. You're then whisked away to start out your own storied rise to the top as the next famous Wizard of Legend, a path which will be riddled with you dying a lot of times. Hey, those are the breaks.

You'll be able to sort out equipment matters, change out spells, and perform a variety of actions in the base area you begin in before transporting yourself to Lanova Castle and its surrounding areas, where merchants wait to sell you some of the items you need to conquer the Trials. When you're outside Lanova Castle, you can purchase things with Chaos Gems earned within each dungeon, and while in the dungeon you can buy things with the gold you earn within. The catch is, the gold you earn is stripped when you die and have to start over, but you get to keep Chaos Gems.

Once you're ready to start the Chaos Trials, you can walk forward and teleport inside to get things going. Then it's time to play over and over and die a million times before you get the hang of each enemy's patterns and how you can easily combat them. As previously mentioned, this is a roguelike, so dying is par for the course. Progression is tied more to the arcana spells and relics you'll earn as you make your way through the Chaos Trials. 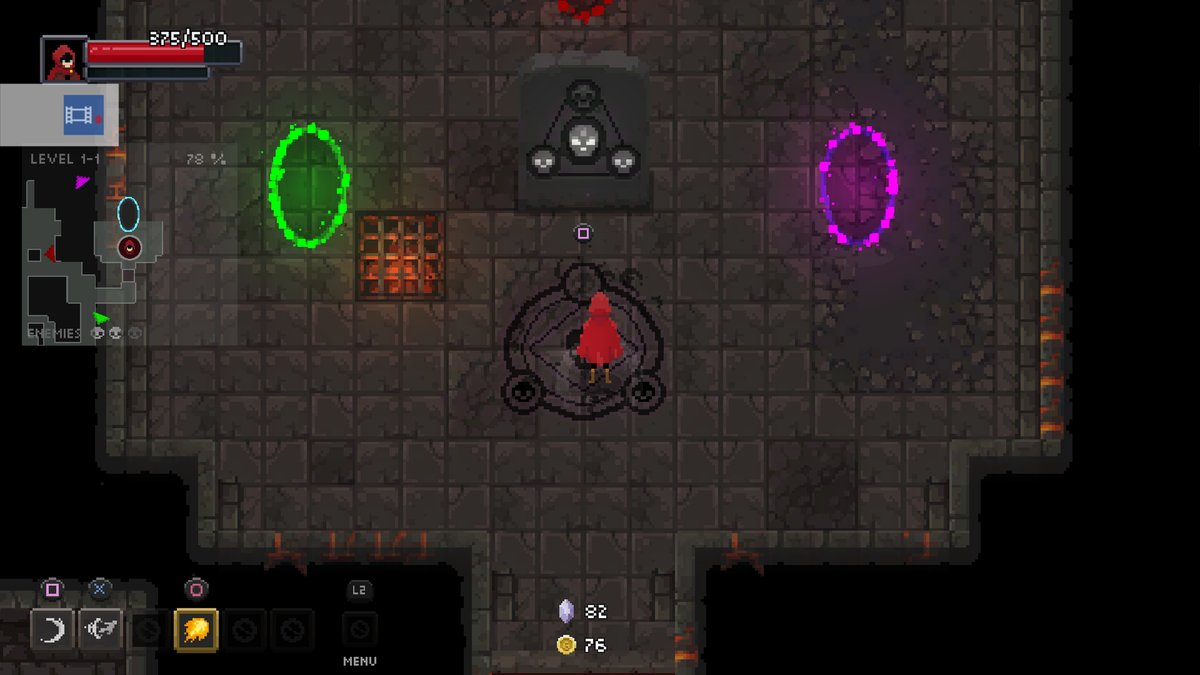 As far as the Chaos Trials' setup, they're a series of three difficult boss battles with each Council of Magic member tied together with randomly-generated maze-like levels. Each level is populated by a series of traps and enemies, ranging from jelly-like blobs to bow and arrow-toting wizards. Some rooms are filled with lots of lava, while others have frosty terrain or grassy fields. It depends on what's randomly generated each time.

You've got a regular slash attack and dash at your disposal to use, and movement is quite zippy and smooth. It's a breeze to swish around the map and keep out of enemies' way only to pepper them with your own attacks in the blink of an eye. My favorite part of the game, in fact, is just how smooth and buttery everything feels, with zero lag or problems even when several enemies casting spells are onscreen at once.

You'll find several shop rooms in each level, though there are other discoveries to be had at random as well, such as Taffy the Pinata, a game room where you can select one of your Arcana cards to trade at random with another card after a deck is shuffled, and more. Each level has a sub-boss in the larger scheme of things before you fight a wizard, and when you find the room where the boss is located, you can start the fight at any time, or teleport to one of the shopkeepers or other rooms you found in the dungeon. What you'll really need to get you through the Trials, however, are Arcana and Relics.

Arcana range from fists that rise from the ground to pummel your enemies to a lightning storm that travels in a straight line across the battlefield. There are powerful firestorms and even those that augment your regular dash ability with an elemental spell as well, so not only will you dash out of harm's way, but you can leave a trail of flame wherever you go. There are a number of various arcana to test out, but unfortunately you're only able to have a few equipped at one time. You'd be far too overpowered otherwise, obviously, so the fun lies in figuring out which arcana works with others and complement your play style well. There are over 100 different types of them, and it's always a treat to head into each round of Chaos Trials attempts to see what you can find next. 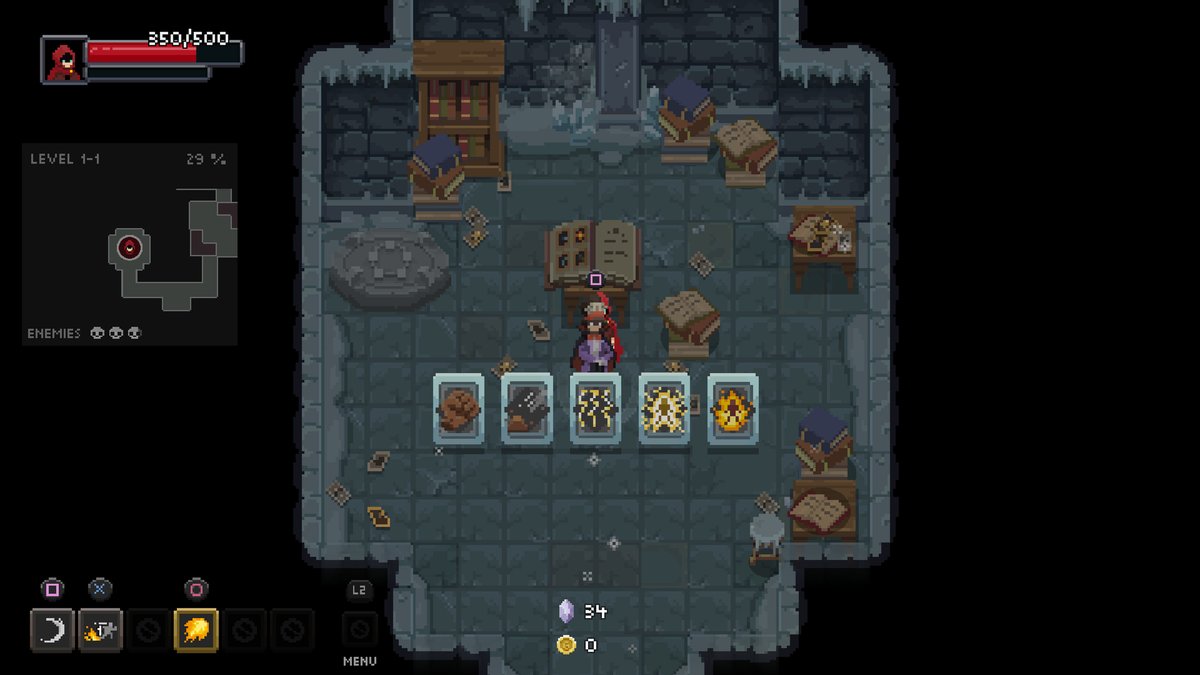 Relics are ancient items created by past wizards deemed powerful enough to become legendary heroes. The're accessories that provide various passive effects ranging from offensive to defensive, so there's a different relic appropriate for each situation. There are several pages' worth of different relics you can purchase or discover each time you delve into the Chaos Trials, from a glove from Midas himself that nets you additional gold to "vampire glasses," which siphon health from enemies each time you land a critical hit. They're integral to making your way further into the Trials each time you return to make your way through, especially since you don't retain experience or anything to help you progress. Like Arcana, the more Relics at your disposal, the better your chances at conquering the enemies standing in your way.

When you buy Relics, there doesn't seem to be a way to figure out what each of them do before cementing the sale, however, which makes it a little frustrating but also thrilling to see what you're buying and how you can incorporate it into your next run. At first I found this a bit frustrating, but the mystery made me a more skeptical player and careful of what kind of purchases I made.

Wizard of Legend is a satisfying and thoroughly challenging roguelike with plenty of arcana to discover, relics to purchase, and several ways to help players feel as though they're customizing the game to make it totally theirs. With online and couch co-op, you can share the adventure with your friends, which makes adventuring throughout the Chaos Trials even more fun. I enjoyed my path to becoming a powerful wizard very much, though it may not be a game for the less patient. It's a long way to the top if you wanna kick butt and take names...at least in Wizard of Legend, anyway. But it's so, so worth it. Try it and you'll see!

This review is based on a PlayStation 4 digital code provided by the publisher. Wizard of Legend is available tomorrow on Steam, Nintendo Switch, Xbox One, and PlayStation 4 for $14.99.