The only thing better than finding some of a game's hidden treasures is finding all of the game's hidden treasures. That's why we're looking into all 12 of the different treasure maps available within God of War. This time around we're examining the Finder's Fee treasure map, which points Kratos toward a stash hidden in a lookout tower deep within the Northri Stronghold.

The Finder's Fee treasure map is located just beyond the boat dock over by the Forgotten Caverns on the northwestern shore of the Lake of the Nine. From the shoreline, head past the barrels into the cavern, keeping to the left. Eventually the map can be spotted glowing just a short distance away from a hidden treasure chest.

Since Kratos doesn't like picking things up, command Atreus to grab the map, then use the D-pad to reveal the map's clue art and the following key phrase: "I've been working for Hraezla Farmadr for a long time, but the pay is always short. With the camp split between Vandrid and his old man, no one will notice me stashing a bit of the earnings on the side. My secret perch is the perfect hiding spot." 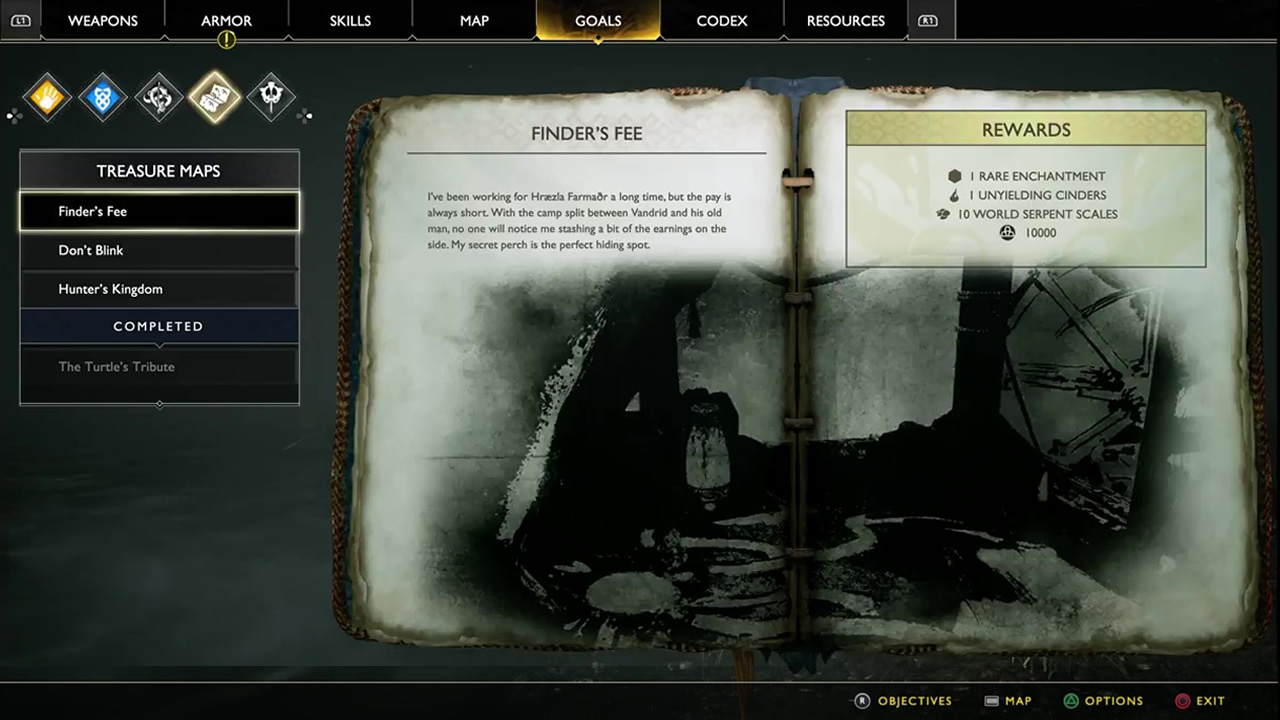 It's fortunate that the writer felt the need to detail his precious hiding spot, as it's in a location players might not have fully explored during their campaign run so far. The Finder's Fee treasure is located north of Northri Stronghold, not too far from where players can find the Njord's Oarsmen map. From the mystic gateway, paddle up the river until the tower and water wheel can be spotted. Once there, climb the wooden tower all the way up to the perch to spot the treasure hidden near the rear wall.

In return for solving the map's mystery, players will receive one rare enchantment, one Unyielding Cinder, ten World Serpent Scales, and 10,000 Hacksilver. To track down the rest of the game's collectibles, including all of these deviously hidden treasure stashes, be sure to head over to our God of War walkthrough and guide.