Looting the treasure left behind by corpses might seem unusual in the real world, but it's par for the course with Kratos and Atreus. God of War is filled to the brim with various collectibles and valuables otherwise, and players can track down vast hordes of wealth by finding each of the game's 12 different treasure maps. This guide concerns itself with the map known as The Last Place They'd Look, and we happen to know the location of the map as well as the solution that points to its hidden rewards.

The God of War treasure map titled The Last Place They'd Look can be found within The Mountain, just east of the Foothills, around the big cluster of rocks players can see at the center of the area through the in-game map. It's important for players to look for this map the second time they visit the area, as it may become inaccessible later in the game. Fortunately, it's hard to miss: near the fortified cliff edge, run past the World Tree sap and around the bend, then head through the archway to find the map sitting in the middle of the tunnel.

Use the D-pad to pull up the map and reveal its visual representation and key clue phrase: "The Valkyries will hunt me until my last breath. If they seek what is mine, I shall hide it right under their noses." 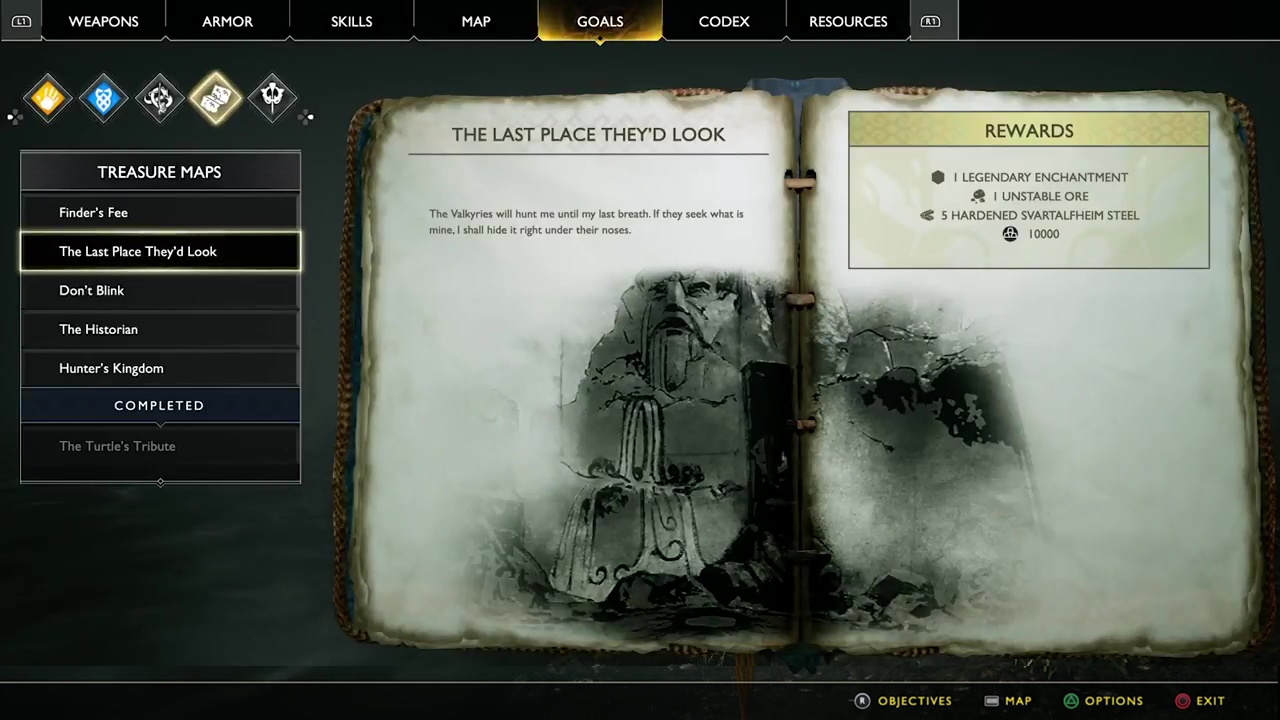 With the inspiration behind the map's name now obvious, travel over to the Council of the Valkyries, just a short distance east of where players can find the Njord's Oarsmen treasure. Within the area's central courtyard featuring the various thrones, head toward the north side of the circle to spot the treasure buried between the two pillars overlooking the waterfall.

As reward for looting another man's possessions, the player will receive one legendary enchantment, one Unstable Ore, five Hardened Svartaflheim Steel, and a princely sum of 10,000 Hacksilver. To loot the rest of the realm's stashes, be sure to check out the treasure map locations and solutions featured over on our God of War walkthrough and guide.