As a way to stoke the flames even further for those excited to get their hands on Pillars of Eternity 2: Deadfire, Obsidian has revealed the plans for post-launch content. Three different expansion packs are in store, with the first releasing in July 2018. In addition to chasing down a god, now players will have to prepare for a mysterious dimension, undiscovered lands, and the wavering loyalty of your party.

After chasing down the god Eothas after he rises from beneath Caed Nua, players that grab the three expansion packs will have to tackle the "Beasts Of Winter", "Seeker, Slayer, Survivor", and "The Forgotten Sanctum" campaigns.

In Beasts of Winter, your party will journey to an island populated by a mysterious doomsday cult. That cult hides a secret and your efforts to unravel it will take you to a mysterious dimension called The Beyond, where ancient souls and challenges await. Seeker, Slayer, Survivor arrives in September and focuses on an undiscovered island that will challenge your tactical skills on a mission to rediscover relics and face the land's most skilled adversaries. Lastly, in November 2018, players will take on The Forgotten Sanctum. On the way, the player's party's allegiance and morality will be tested as you help (or obstruct) the wizards of Eora. The consequences of your decisions here will be felt across the Deadfire Archipelago, so choose wisely. 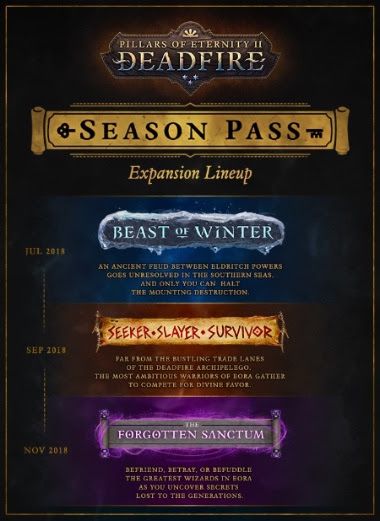