God of War: The Journey - Escape from Helheim

Our walkthrough for the God of War mission titled Escape from Helheim follows along as Kratos and Atreus climb through the frozen wastes and take to the sky before making a key discovery.

Find A Way Out of Helheim

Head toward the left side of the area and climb onto the rock wall, then shimmy to the side and climb upward to formally reveal the location known as Helheim Landing. Continue across the side of the structure, then climb up and destroy the enemies in there. When they're gone, burn down the brier patch to reach the treasure chest on the other side, then head north across the bridge toward the gate. 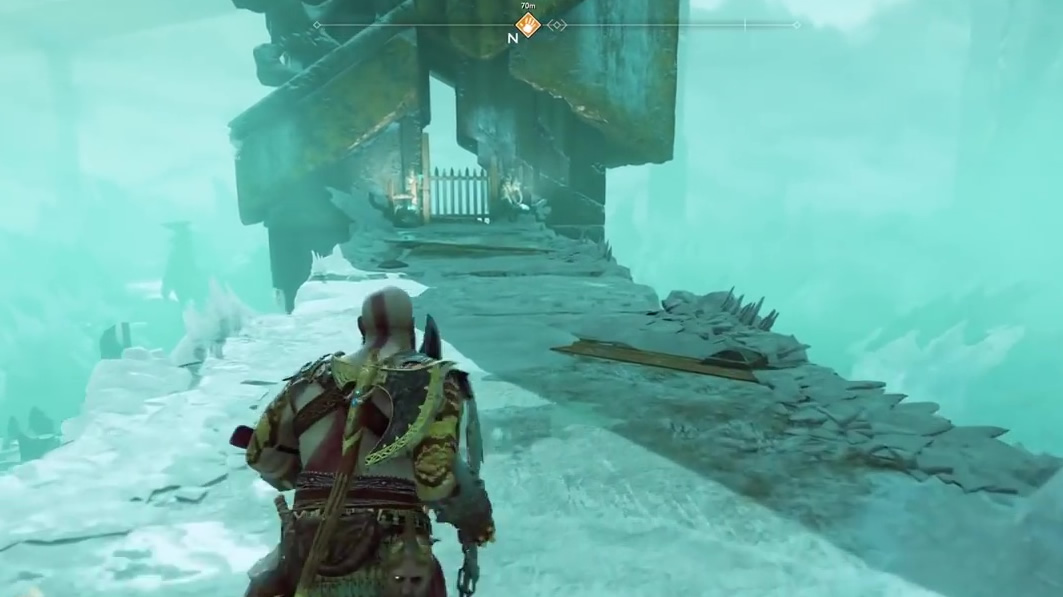 Clear out the draugr, then open the gate and head through. Watch the short scene play out, then turn east and begin to climb up and around the wall. Climb downward to the ground floor, then burn the briers and use the Winds of Hel Energy to and the Blades of Chaos to open the door. Deliver a beatdown to the knight within, grab his loot, then open the gate on the western wall. Head down the path, then jump across the gap and climb up to watch another scene begin to play out.

Climb up the pillar and down the other side, then leap across the ledge and continue scrambling along the wall. When Kratos reaches the upper ledge, he'll spot the boat below. Climb down once more and start heading southwest for another brief enemy encounter. Once they've been neutralized, lift the stone pillar and look for the nearby Nornir chest. Destroy the three runes to claim its prize, then head west toward the boat.

The massive old ship will work as Kratos and Atreus' conveyance out of Helheim. Ignite the various bramble patches, then use the wheel at the stern of the ship to raise its main sail and set it down its course. 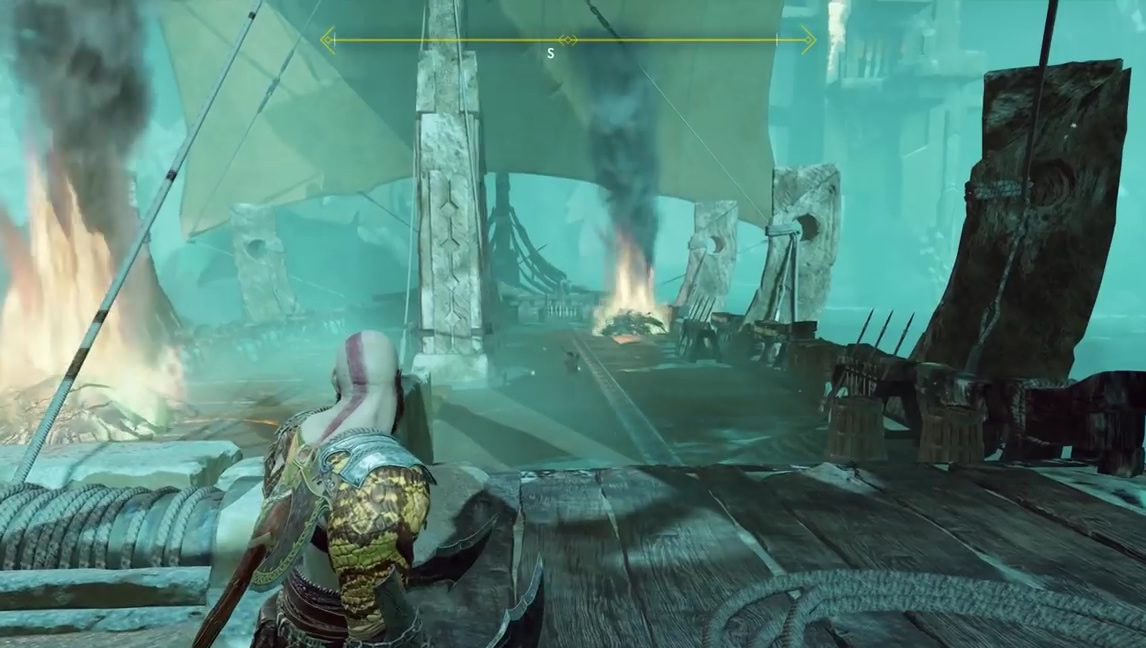 Once the ship stops moving, head to the bow and use the axe to chop away at the mounting point of the sail in order to free it. Once it's loose, head back the stern and use the wheel to adjust the sail to better catch the heat from the flames. Walk across the newly formed bridge, then claim the treasure chest at the end of the path. After that's done, use the wheel by the bridge to allow the ship to rise to the next level.

Take out the enemies, then hit the mechanism inside the tower to rise up to the second story. Walk back across the bridge and drop onto the ship, then call on Atreus for help breaking free of the bridge.

With the ship now floating ever skyward, players will find themselves in the area known as the Skies of Helheim. At this point several draugr will spawn, and Kratos will have to fight them off while simultaneously relighting the fires they put out. Eventually the ship will get stopped by a harpoon; clear out the nearby enemies, then interact with it by pressing Circle to drop it off the side of the ship and get back in motion. 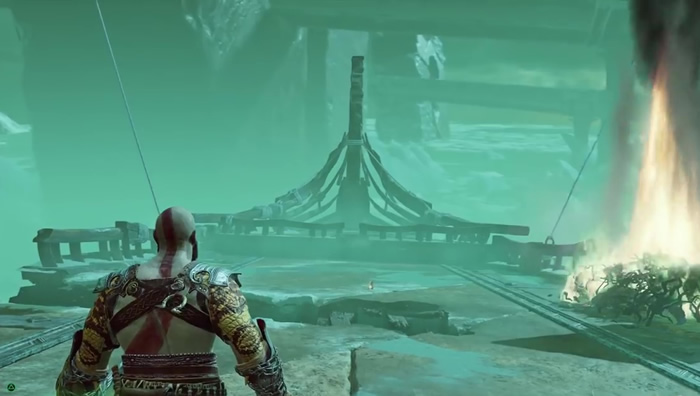 With the vessel flying once again, resume fending off the incoming draugr and reigniting the fires until the ship crashes through the bridge. Stay on the defensive for a few more minutes until another two more anchors come crashing down onto the ship. Use the Circle button to throw them off, watching out for enemies, then continue fighting and lighting the fires until the ship gets hit with a third round of harpoons.

At this point an ogre will spawn alongside the draugr. Fight carefully, making sure to stay aware of any enemies that might circle around Kratos. Take out the ogre through whatever means necessary, then clear out the remaining draugr and head back to the bow of the ship. Use the Circle button to break the bow away, then sit back and enjoy the brief cutscene.

Kratos and Atreus will now be in the Secret Chamber of Odin. Head through the door on the side of the room, then nab the treasure from the chest. With that done, head back to the first room and use the chisel to break the seal on the door. Head through the series of doors until Atreus spots the missing panel regarding Tyr. 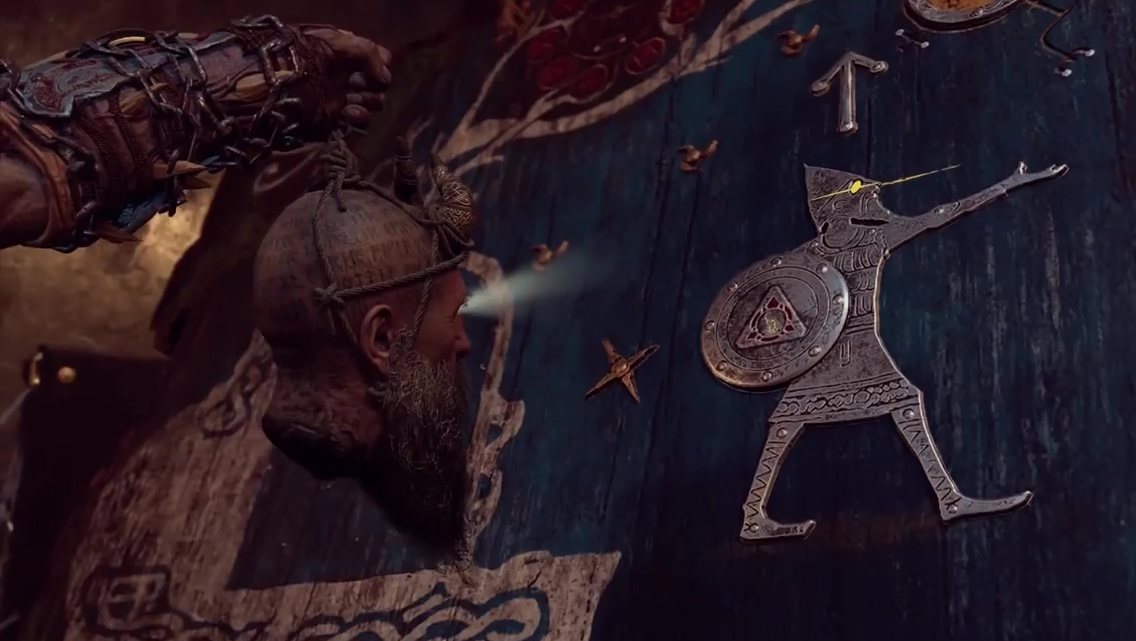 Allow Mimir to inspect the panel in order to reveal a hidden clue. With the new information revealed, the Escape From Helheim quest will end. Next up is the mission titled A Path to Jotunheim. Follow along with the rest of the game's missions and learn some crucial information regarding mechanics and collectibles by heading over to our God of War walkthrough and guide.