God of War: The Journey - Behind the Lock

The eighth part of our God of War walkthrough concerns the questline titled Behind the Lock. Getting through the mission is a breeze, but players willing to explore a bit will spot a number of opportunities to collect treasure and close another of the game's Realm Tears.

Find the binding points on the door, then use the chisel to crack open the seal. Head through the door and out into the courtyard. There's a chest here that can be opened by having Atreus shoot down the bowl behind the climbable wall. There's also a sealed gate blocking access to a number of items; destroy the first seal behind and above the entrance to the courtyard, then climb the wall on the far side. From the new vantage point, look back down to spot the second seal sitting within an alcove in the ruins below. Finally, jump down to the holding cells on the lower ledge and turn 180 degrees to spot the third seal hiding in the ice across the gap. Jump down and head through the open gate to score a Glacial Catalyst and a chest containing Hacksilver. 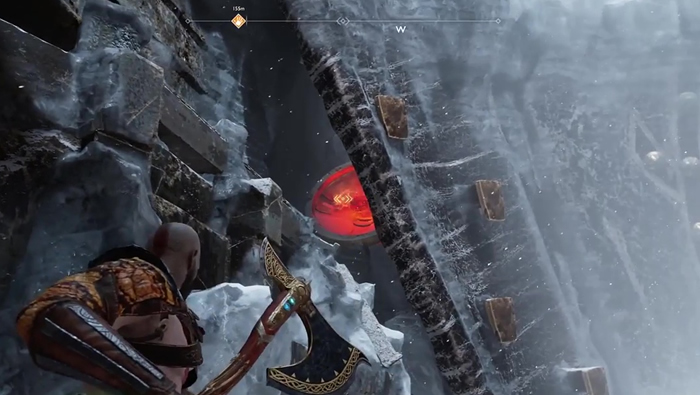 Climb back up the rear wall, then use the chain to drop down into the dining hall. Speak with Sindri if desired, then approach the door at the back room of the hall. Use the chisel to break the binding on the door, then proceed through. A treasure chest can be found on the left side of the chamber; grab the nearby World Tree Sap from behind the wooden barricades and use it on the chest to claim a Solid Svartalfheim Steel.

Head through the door at the end of the hall, then take a look around the room to spot a wheel on the floor and a carriage suspended on a rope above. Hit the chain with the axe to free the carriage, then roll it to the lower end of the rope. Head behind the wall and instruct Atreus to climb up the platform and onto the carriage, then use the wheel to lead him back to the scaffolding on the other side. Once there he can drop a chain down for Kratos to climb. 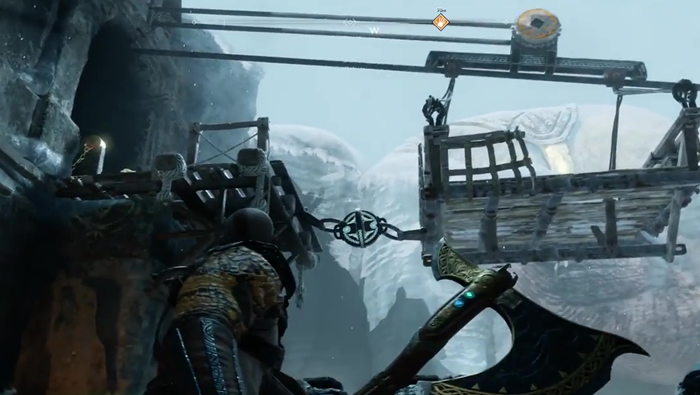 Ride the carriage back down again, then jump across the gap and drop the other chain below. Afterward, head beneath the giant's finger and use the chisel to break the seal on the door. Walk through and into the Northern Dock. From here, climb the chain on the left side of the room and head outside.

Return to the Lake of the Nine

Find the boat on the shoreline and climb in, then paddle down through the nearby cave passage, crashing through any floating barrels to claim some easy Hacksilver. Enjoy the idle banter on the trip back to the Lake.

Follow the objective heading to find the entrance of Tyr's Vault. Use the increasingly useful chisel to break the seal and head through the door.

Within Tyr's Bridge Interior, approach the panel with the missing images to get a bit of lore, then head to the center of the room for a little reading lesson with Atreus. Unfortunately, the tender moment will be cut short by the arrival of an unexpected guest. A cutscene will begin, and when it finishes, the Behind the Lock questline will end.

The end of this mission drops players straight into the next quest titled The Sickness. Players can catch up on other mission guides and collectible locations by heading over to our God of War walkthrough and guide.