What's the Deal with the Fortnite Meteor?

Fortnite: Battle Royale has something of a mystery on its hands, and fans are going crazy over it. The past few weeks have found players dreaming up theory after theory regarding a mysterious meteor that suddenly appeared in the sky over the game's Tilted Towers zone. The Fortnite Meteor Event, as it's sometimes referred to, is an ominous and endlessly intriguing phenomena that's going on in-game. Some believe it spells out destruction for Tilted Towers or another area in-game. Others believe it's a momentous occasion that will mean something signifcant for the game's lifecycle in general, but Epic Games has kept mum on the entire situation thus far, aside from some pretty hilarious trolling, anyway.

If you've heard about the Fortnite Meteor Event in passing or are curious about what it is, how it started, or just want to know when Tilted Towers are going bye-bye, you've come to the right place. We've got all the juicy tidbits of info you need to know about what could possibly happen with the meteor -- and the other pieces that have begun raining down to earth.

What is the Meteor in Fortnite? 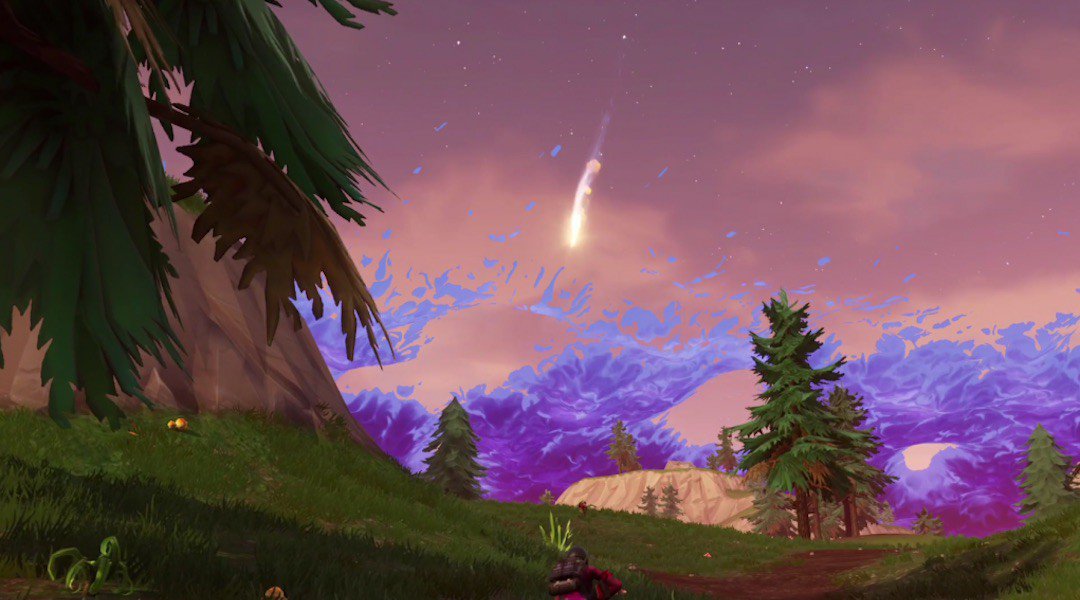 What exactly is the meteor gleaming in Fortnite's sky? That's the thing -- no one knows for sure right now what it is. What we do know is that recently a small object appeared in the sky, where everyone can see it. It could end up being a number of different things, but data miners and other keen players have uncovered important tidbits of info that have lead them to believe it could be a comet or meteor. Data miners previously found a meteor embedded within the game's code, and thus the source of the rumors was born.

Fans have been hard at work hammering out their own theories when it comes to what the meteor could actually be, and the theories have been pretty intriguing, to say the least. Players previously believed that the meteor would end up decimating Tilted Towers due to a controller vibration "bug" uncovered that just so happened to be rattling out a message in Morse code: "SOS D 5 418." "SOS" is a distress call, but "D5" corresponds to Tilted Tower's location on the map in terms of grid positioning. The "418" in the code appears to correspond to a date: April 18, 2018. That date has come and gone, however, and nothing has happened in terms of any real changes to the Fortnite map. It's possible that the code could refer to April in general, instead of April 18, 2018. Either way, you'd still have 4/18.

There's currently a bug that causing controllers to randomly vibrate. We're working towards a fix on that but in the meantime, you can turn off vibrations in the options.

That hasn't kept people from still subscribing to the theory that Tilted Towers is suddenly going to go bye-bye, however. It still seems highly likely, especially since additional meteors have begun appearing throughout the sky in-game recently.

Players have also uncovered some interesting theories about the map in general, specifically the fact that it appears to be similar to that of Poland. If you look at a map of Poland, you can see Tilted Towers' location right near an area called the Morasko Meteorite Reserve.

@Ninja I actually found an Easter egg about tilted towers in an old epic games game its called zzt,also love your vids pic.twitter.com/PszqUcCPOu

It's an interesting Easter egg that could refer to the "meteors" in the sky as well, which lends credence to the popular fan theories floating around out there. There's also the throwback reference to the video game ZZT, which the founder of Epic Games, Tim Sweeney, created long ago. One eagle-eyed fan found a screenshot of the game where a meteor hits a city, though there isn't any real explanation of what's going on with it later in the game. Spooky. While this doesn't give us any definitive answers, it certainly makes sense that we might see a meteor as a throwback to the classic game, and a pretty cool one at that.

No one knows just yet exactly what the meteor spells out for Fortnite, but half the fun lies in theorizing what could potentially happen going forward. We may not know exactly what Epic has planned for the meteor or Tilted Towers in general, but we're going to try and suss out an answer right down the last minute. What do you think the meteor is? What do you think will happen? Let us know your favorite ideas and theories!