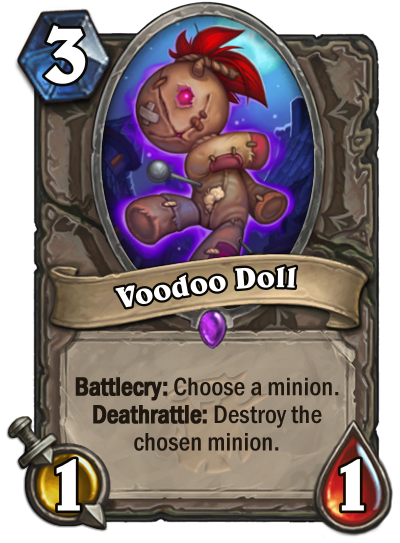 Analysis: Here comes the voodoo! The Voodoo Doll offers an instant removal effect, which is handy for classes that may not have it. Mage players will love this, especially ones running Frost Lich Jaina. Warlock players can combine this with other spells, like Dark Pact and Mortal Coil. Warriors can use its myriad of Whirlwind effects. The 1/1 stats are weak, but that's intentional to maximize the effect. The best part is, even if it gets swiped by a Priest player, it doesn't change the Deathrattle.

The only scenario where this doesn't work is if it gets force summoned by something like Dirty Rat or gets summoned off an RNG effect. The Battlecry is everything and the Voodoo Doll is useless without it. 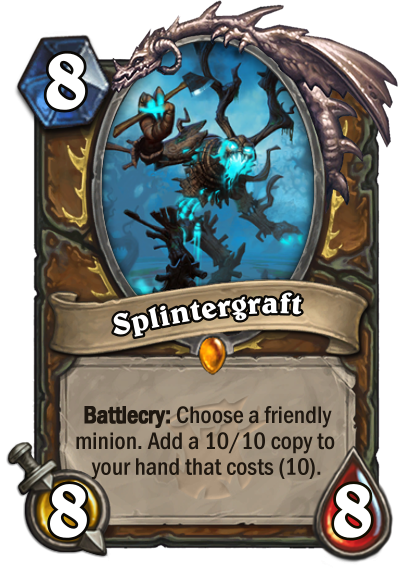 Analysis: This has the potential to be crazy powerful for the Druid. The first thought is, it'll go great with any Charge minion, like the Stonetusk Boar, as a potential finisher.

But this is a Legendary that's currently more suited for Wild at the moment. Pair this up with Doppelgangster for a trio of 10/10s. Or better yet, pair this up with Aviana and Kun the Forgotten King for some maximum shenanigans involving Leeroy Jenkins and a pair of Faceless Manipulators. It may not be as good as the old OTK Druid combo, but it's a fun idea to think about. 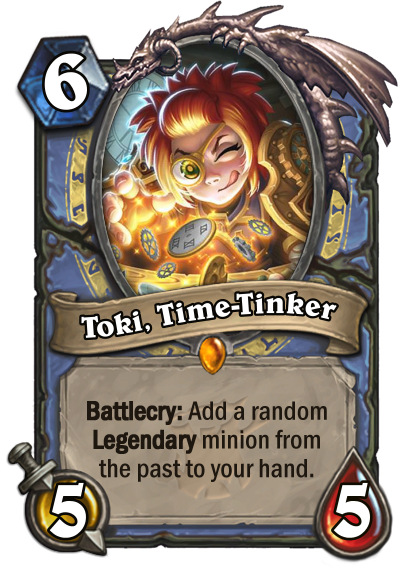 Analysis: Toki is out there purely for the memes. There are a lot of good Wild Legendaries out there, but putting your fate in the RNG gods like this is not a particularly great idea. Sure, Toki could pluck out Ragnaros (either of them) or one of the Old Gods. It could also bring down Nat, the Darkfisher or Patches, who's significantly worse post-nerf. 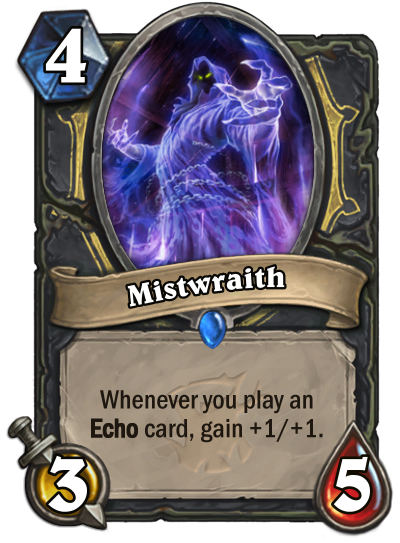 Analysis: With 3/5 stats, Mistwraith certainly isn't bad on its own. But it operates with a sort of roundabout Questing Adventurer effect, gaining stats for every Echo card played. The Rogue has received plenty of useful Echo cards, including Cheap Shot and Face Collector.

While this is a fine idea on its face, by the end, the Miracle Rogue player will still want to opt for Questing Adventurer. They'll probably be able to buff that to more impressive stats with the same Echo cards and more. 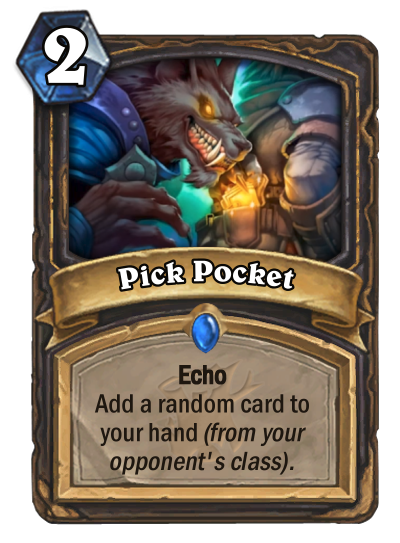 Analysis: Since Rogue is saying goodbye to Undercity Huckster and Swashburglar in the new Standard year, this class is going to need some new cards to swipe opposing class cards. So here's Pick Pocket, which offers that same effect without the board presence.

Pick Pocket hopes to make up for the lack of a body with the Echo effect, which does go a long way in Miracle Rogue decks. This one will definitely see some play there, so expect to see this one frequently. 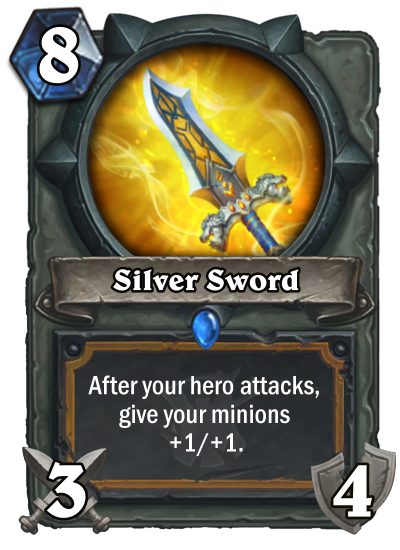 Analysis: The Paladin is about to lose most, if not all, of its hand-buffing options with the loss of the Mean Streets of Gadgetzan set in the new Standard year. This is one of the few Paladin-specific handbuff cards to show up for The Witchwood and it's not a particularly great one.

While the Silver Sword certainly can work with Call to Arms and other Recruit cards, it won't be any Paladin player's first weapon choice in those kinds of decks. Dude Paladins will opt for the slightly-cheaper Vinecleaver, while most other Paladins will go for cheaper weaponry, like Unidentified Maul or even Val'anyr. 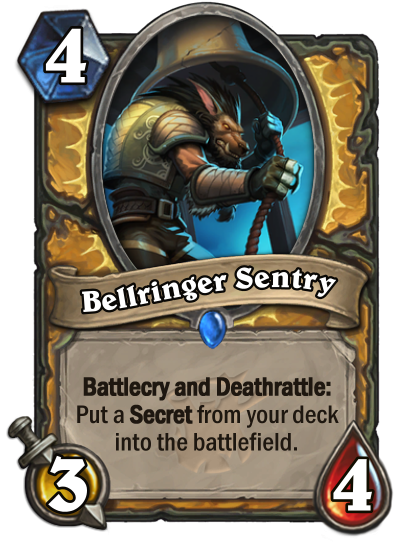 Analysis: On its face, this can be a very powerful minion. The Bellringer Sentry is like a lovely cross between Mad Scientist and Mysterious Challenger. And with 3/4 stats, it's certainly a decent 4-drop with a lot of value.

The problem is that Paladin Secrets aren't particularly great at the moment and they're about to get worse with Getaway Kodo about to rotate out. Of course, this will be around for the next two years, which leaves plenty of time to add new Paladin Secrets. Bellringer Sentry may not be great now, but it has the potential to be a mainstay in the future. 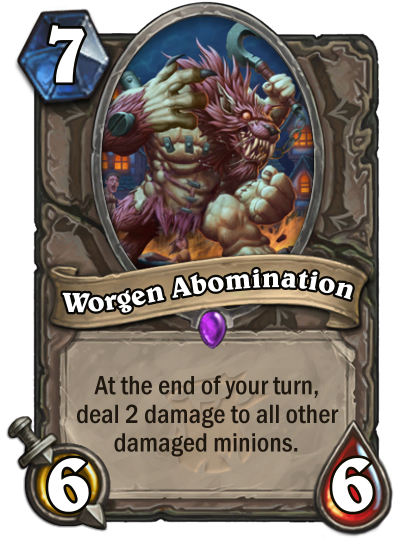 (7) Worgen Abomination (6/6)
Type: Minion
Class: Neutral
Rarity: Epic
At the end of your turn, deal 2 damage to all other damaged minions.
Source: Gaara on YouTube

Analysis: Worgen Abomination's appeal is that he'll deal damage to any damaged minions. The Warrior can use this with any of its multitude of Whirlwind effects. Warlock players can do some quick damage with Defile and then drop this guy, which should help lessen the sting of Abyssal Enforcer rotating out. Rogue players can combine this with Fan of Knives to set up this 6/6 drop. It's a sturdy body and its effect has its uses.

It may not fit into many constructed decks, but look for Worgen Abomination to pop up in Arena quite a bit. 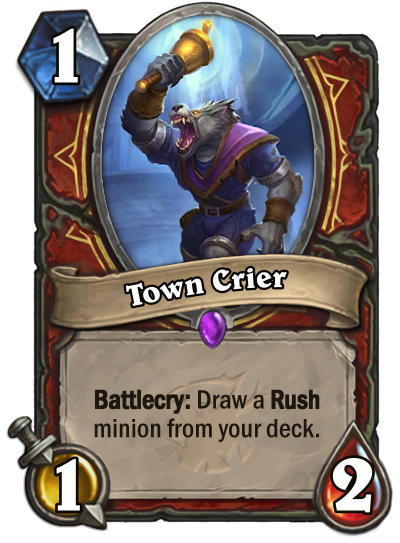 Analysis: It's hard to quantify the impact that Rush decks will have on the overall Hearthstone meta. But I do know a useful card when I see it and Town Crier is immensely useful. On top of being a solid 1-drop with 1/2 stats, the impact of a Turn 1 card draw cannot be overstated. It's part of what's made Kobold Librarian such a great card for the Warlock.

Town Crier has a very good chance to be a Warrior staple, especially in Control Warrior decks. It not only helps the Warrior dig into their deck, but also allows them to have a Rush minion ready to answer a minion later in the game. It's a strong card overall and one that will be a Warrior opening play for a long time.

That's it for now! Keep it on Shacknews for the next few weeks for more card breakdowns for the Witchwood, leading all the way up to the expansion's release on Thursday, April 12.