What happens after a god killer runs out of gods to kill? What happens when someone like Kratos finishes slaughtering an entire pantheon and his mission is over? The answer, apparently, is settle down in the woods and raise a family. Life seems to be pretty great for Kratos, but then one day turns everything upside-down.

God of War tells the story of a whole new phase of Kratos' life, one in which he's not fighting for himself, but fighting for his family. Shacknews recently had a chance to go hands-on with the first part of Kratos' new journey and soak in this new status quo. 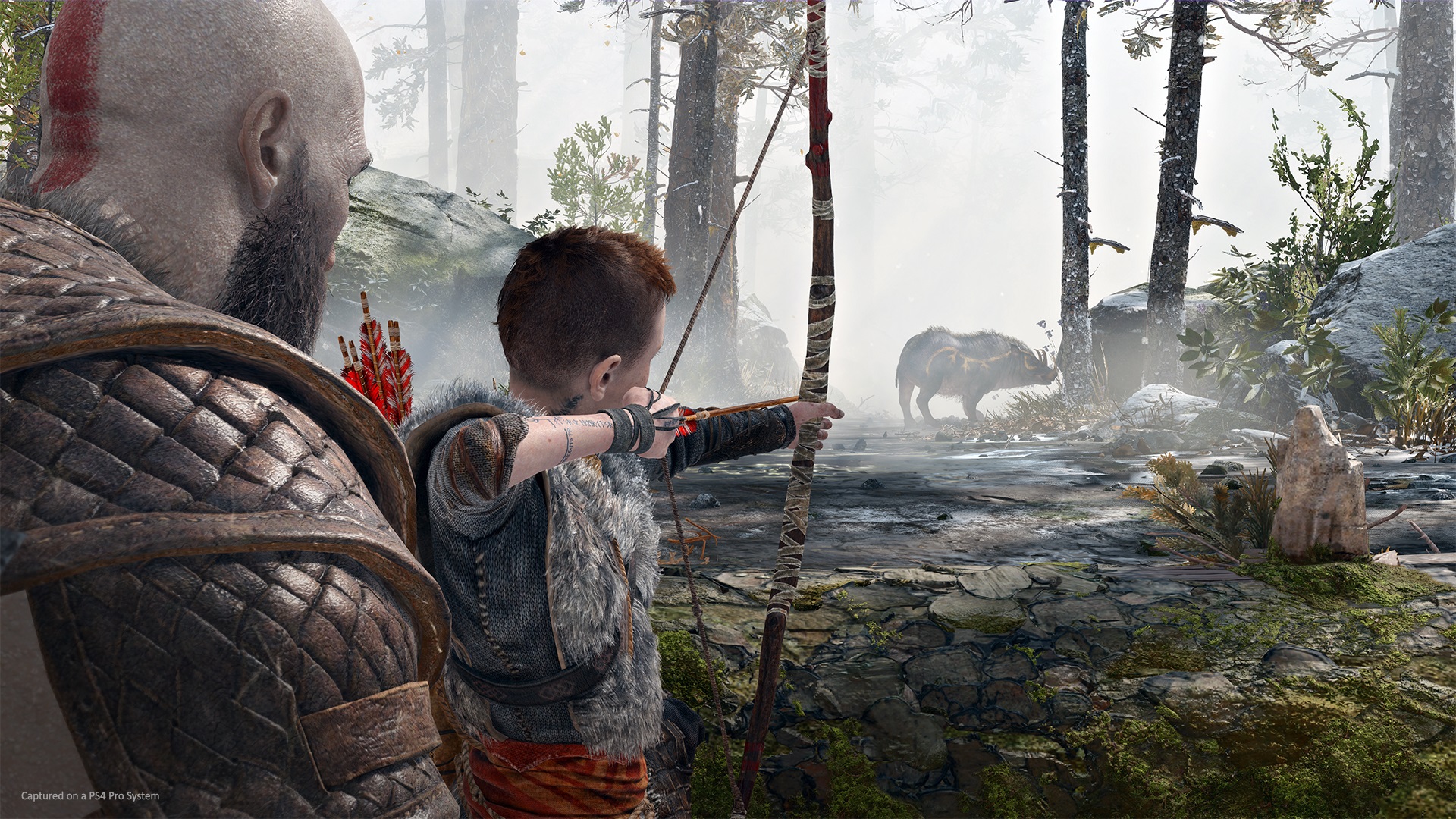 Kratos' life as the Ghost of Sparta has ended and he did indeed settle down to raise a family. But the opening minutes of the game leave Kratos in an unfamiliar position. He must now raise a little boy by himself. His early utterance of the phrase, "Everything is different," encapsulates his demeanor going forward.

The dynamic between Kratos and son Atreus is quickly established through an early father/son hunting trip. Atreus is just learning how to wield a bow and arrow, with his only other weapon being the hunting knife that his mother passed down to him. He's still at an innocent age, not knowing what it's like to kill anything. In fact, as a deer he shot with an arrow laid dying on the ground, Kratos walked him through his first kill to the end. Atreus is quickly established as a sickly boy. He's showing less signs of sickness, but he still has occasional coughing fits. But worse than that, he has anger issues, something he clearly gets from his father. 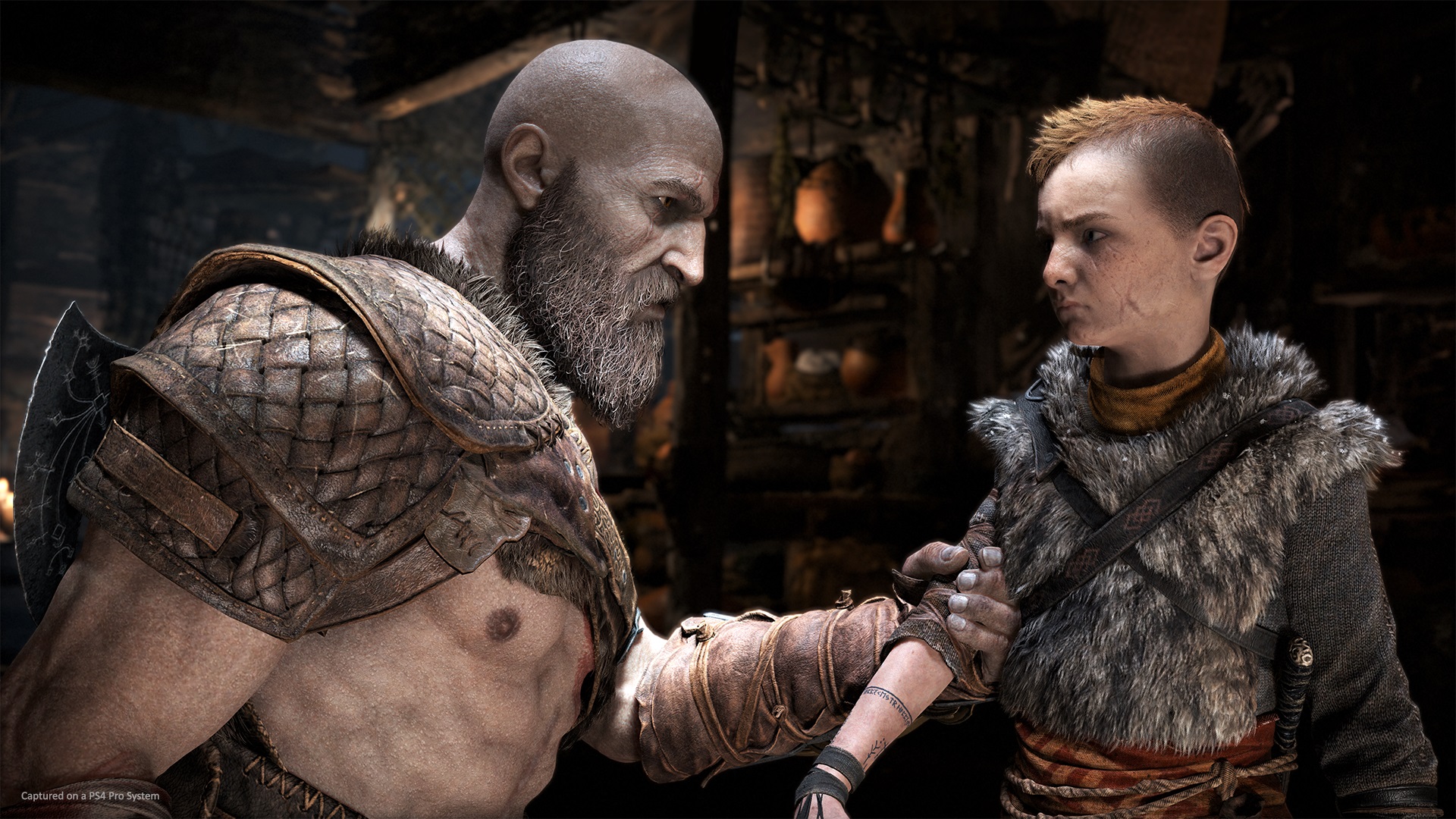 It doesn't take long for the classic God of War action to kick into high gear. Over the course of the demo, there are a couple of early boss battles that set the tone for the game going forward. They perfectly capture the theatrical, over-the-top action that the series is known for. What pleased me greatly was that it was a more polished version of that same 3D action I've become accustomed to. On top of that, I didn't see a single quick-time event through my entire time with the demo, which includes the boss battles and elsewhere.

Segueing into the action, God of War centers around two different kinds of combat: hand-to-hand and melee combat with Kratos' new weapon, the Leviathan Axe. Given that the series is now delving into Norse mythology, it's all-too-appropriate to make the comparison to Thor's hammer Mjolnir, in the sense that the Leviathan Axe can be thrown and called back at will. It deals damage as a melee weapon, but also deals damage when chucking it at a foe and if it catches any enemies on the path back to Kratos' hand. The Leviathan Axe has several uses on top of combat, like freezing switches in place, which helps solve platforming puzzles or trigger locked treasure chests. Some enemies are resistant to the Axe, requiring Kratos to use his fists. Using hand-to-hand combat allows Kratos to use visceral finishers, which aren't quite as gory as previous God of War games, but still every bit as effective. Kratos' attacks can be upgraded through XP and various currencies found over the course of the game.

In fact, that was the one part of the demo that was difficult to follow. There are numerous currencies and collectibles, so much so that it can be hard to keep track of it all. It certainly adds replay value for anyone looking to collect everything, but there's a lot of "everything" to find. A lot of is collecting for the sake of collecting, but there are some items that upgrades that will actively help Kratos in combat. This includes Runes, which can give boosts to the Leviathan Axe. For example, the first Rune I found allowed Kratos to strike his Axe against his shield to stun nearby foes. 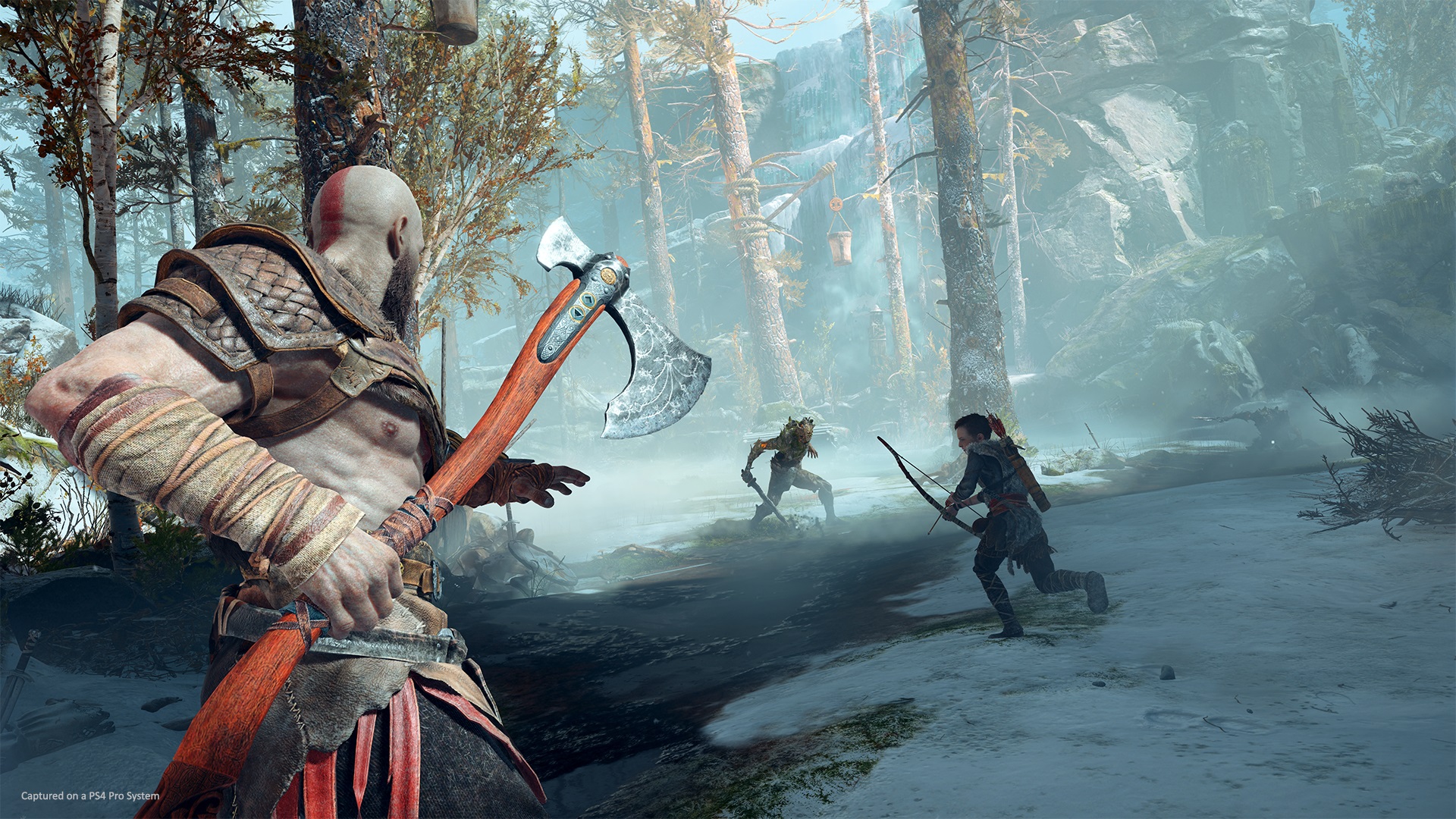 But what about Atreus? Atreus doesn't fight directly, but he also doesn't need active protection. Those concerned about God of War becoming a giant escort mission can rest easy. Atreus stands to the side, similar to someone like Elizabeth from BioShock Infinite. He'll yell out to Kratos if an attack is coming at him from the side or behind, but he'll also be a little more helpful with his bow and arrow. Atreus can fire at enemies to cause a distraction, allowing Kratos to move in with his fists or his Axe for a killer combo. This is particularly helpful against defensive bosses or against larger numbers of foes.

Atreus is also helpful in the field. Kratos will frequently come across Norse writings or art, which contain lore secrets or hints as to what's coming. While Kratos can't read any of them, Atreus learned how to translate these markings from his mother. Add this to the list of collectibles, but one that should satisfy those more curious about Kratos' new status quo.

While I walked away from the God of War demo with a better idea of what Kratos' new world looks like, there are still a lot of interesting questions out there. The biggest one involves Kratos and the Norse pantheon, as players will quickly discover over the early hours of the story. There's a reason Kratos has settled down, but can anyone ever truly escape their past, especially when outside forces aren't willing to forget?

There's a lot to discover in the new God of War. And there's certainly a lot to kill, as Kratos and Atreus run into a large variety of hostile creatures, living and dead. In fact, sometimes they're both, as one sequence saw Kratos take down a group of cannibals and then take them down again when their corpses are suddenly raised. Kratos has a lot of challenges ahead of him in his father/son adventure. God of War arrives on PlayStation 4 on April 20.