Warren Buffett's company Berkshire Hathaway really likes Apple's stock. In a recent interview with CNBC, the 'Oracle of Omaha' detailed Berkshire's biggest investment moves in the last year. "If you look at our holdings, you would assume that we like them in the order in which they rank by dollar value, but if you look at them in terms of recent purchases over the last year we've bought Apple more than anything else."

Warren Buffett: 'We've bought more Apple than anything else' in the last year from CNBC.

Berkshire Hathaway recently disclosed their largest holdings in their annual letter to shareholders for the year 2017, and Apple is now the second largest stock holding at the company. The Apple stake at Berkshire now sits at over $28 billion, just behind Wells Fargo. 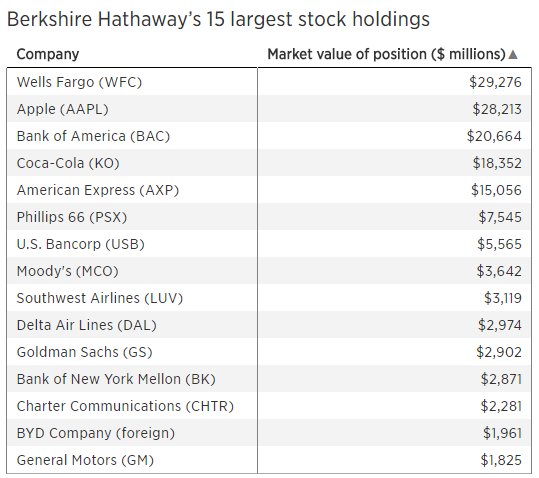 Berkshire's Top 15 Holdings as disclosed in their 2017 annual letter to shareholders. - source: CNBC

Buffet provided further details for why he believes Apple is still a good investment after its massive run to become the largest company in the world. "Apple has an extraordinary consumer franchise," said the 'Oracle of Omaha.' "I see how strong that ecosystem is... You are very, very, very locked in, at least psychologically and mentally, to the product you are using." He went on to describe the iPhone as a "very stick product."

Buffett also explained why he still uses a flip phone given his new love for Apple's stock. "Tim Cook asked me that. Well the answer is that I am just out of touch. But I tell Tim, as long as I haven't gotten one the market is not saturated. The day I buy one, there is probably nobody left after that."

Berkshire now owns over 160 million shares of Apple's stock amounting to a position over $28 billion in value. This seems like a lot, but they are still below the 5% ownership threshold that Apple has put in place to be considered for a board seat. If Buffett keeps buying Apple like he did last year, it is possible that Berkshire Hathaway could land a seat on the Board of Directors in Cupertino.

Apple is "Buy" rated in our Game Trader stock ratings.