Mojang's open-world sandbox title Minecraft was such a tremendous hit that very few were surprised when a flood of knock-off block-crafting titles started to hit the market. For all the derivative games have released through the years, however, Dragon Quest Builders looks to be the one title that's able to take the popular formula and tweak it just enough to provide a fresh and engaging experience. And, surprisingly enough, the most compelling change that developer Square Enix has made to what could be called the Minecraft formula is something that Minecraft itself had very little of — direction.

It's often hard to talk about a video game without mentioning similar titles that have released in the past, but in the case of Dragon Quest Builders, such is inevitable. The core gameplay of Builders is almost exactly the same core gameplay found in titles like Minecraft — players are tasked with using a variety of tools to draw different items from the world, then use those items to craft objects like buildings, weapons, food, and more. Toward this front, Builders is almost a carbon copy of similar titles, with a world populated by earth and stone blocks as well as a number of environment-roaming baddies. 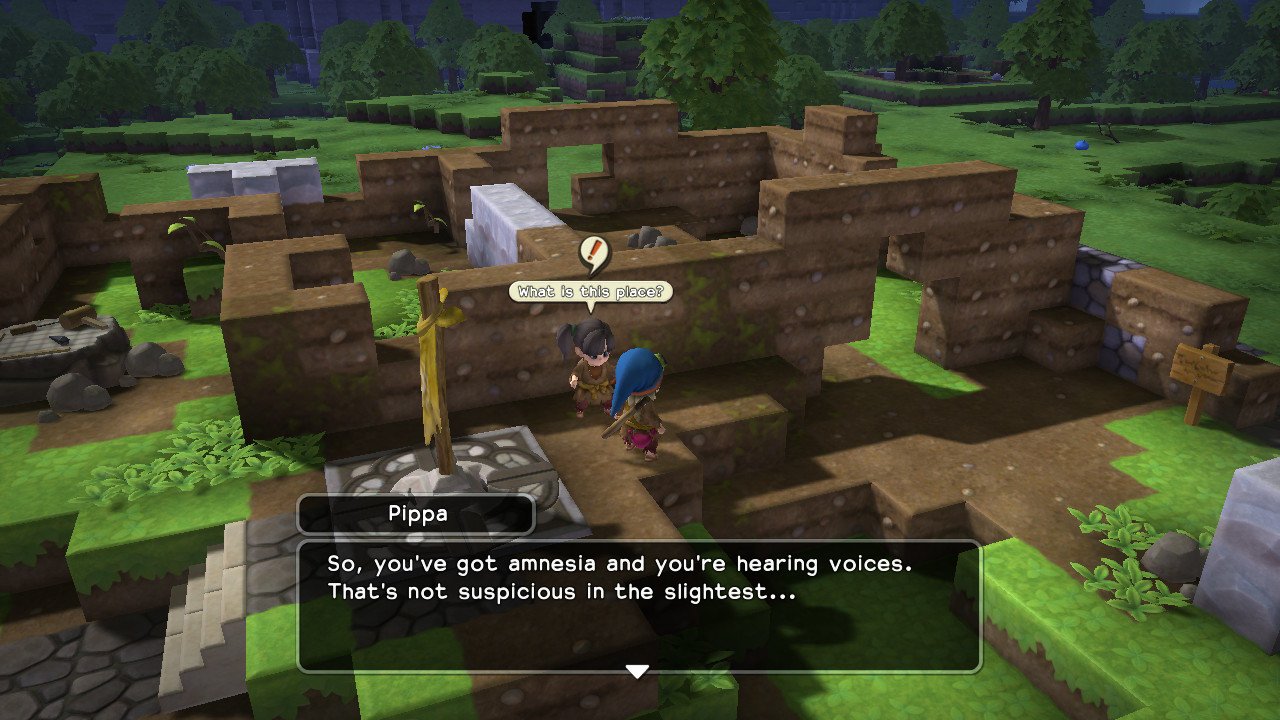 Unlike Minecraft, Dragon Quest Builders does offer a straightforward plot: after a short tutorial area, the game drops players into the realm of Alefgard with the task of rebuilding a society long ago destroyed by an ancient evil force. Somewhere between then and now, denizens of the world have forgotten how to build anything, and the resulting lack of defenses or even of basic maintenance has allowed monsters to overrun the land. As such, it's up to the player to use their crafting skills to learn new recipes that can be used to create, fortify, and eventually populate their own cities.

Aside from a third-person perspective and a general Dragon Quest theme, the biggest change that Builders brings to the sandbox formula is the addition of clearly-stated objectives. As soon as players plant their flag in the game's initial town of Cantlin, they'll start seeing objective notifications from different NPC villagers. These tasks will range from creating recipes to fending off incoming attacks and more, with each representing a clear-cut goal for the players to work toward. 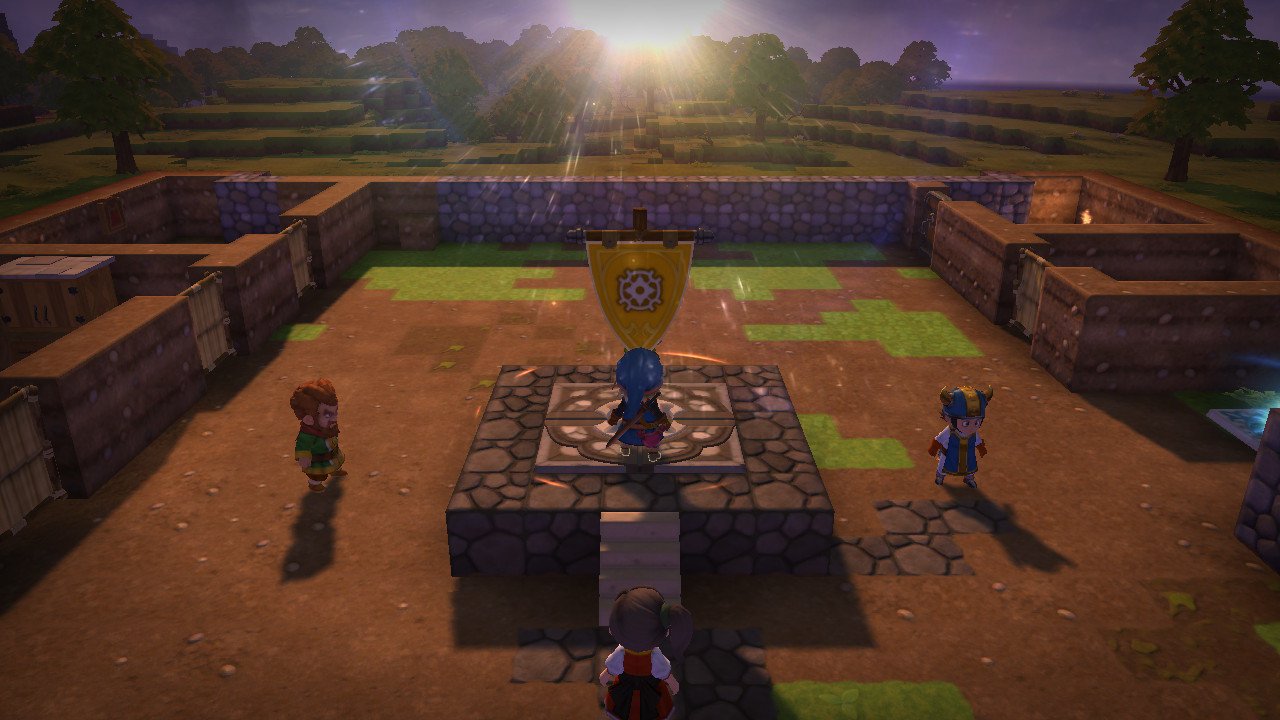 In this sense, Dragon Quest Builders is much more of an RPG than the sandbox-styled games that inspired it. Some objectives, like cooking up mushroom skewers or building a room based on a blueprint, won't require much effort from the player. Before too long, however, players will have to make use of various portals in order to reach further distances across the world and track down rare ingredients, battle skills, or even recruit new townspeople. They're still free to shape the town as they please, of course, but these objectives provide players with both a growing understanding of the game's mechanics as well as a clear-cut goal that needs working toward. It's refreshing, and it definitely helps alleviate the confusion that some feel after diving into an open-world game.

The content on offer within Dragon Quest Builders on the Nintendo Switch is impressive: the game includes four distinct chapters, each of which offering up its own custom-tailored world for the hero to work his or her magic in. By themselves, each chapter could conceivably offer up ten to 20 or more hours of gameplay, assuming players don't mind stopping to smell the roses once in a while. After completing the first chapter, players will also open up the game's Terra Incognita mode, which is essentially a free-roaming play mode where budding young builders can create a world all their own. 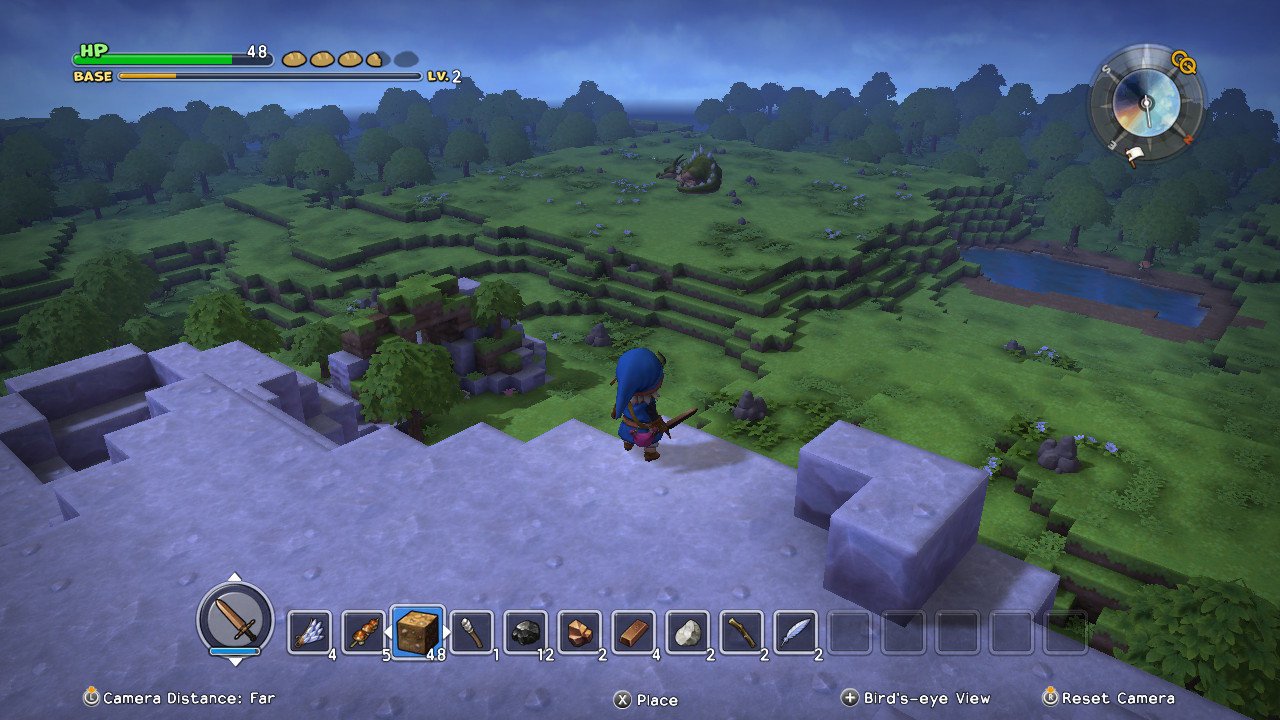 Sadly, Builders does have its fair share of flaws. While the third-person perspective is a fine change of pace by itself, it comes with its own problems regarding block placement, most specifically when it comes to precision. A hollow reticle appears on-screen to help players line up items they want to place in the world, but the system is oftentimes wonky, either because the item in question is oddly-shaped or because the reticle doesn't appear at all until the item has already been placed. The camera also becomes its own source of frustration, particularly when moving in tight quarters or walking underneath trees or cliffs, and being forced to switch from the joystick to the directional pad when navigating menus is a frustrating and needless limitation.

Given that most games in this genre are often played in extended sessions, Dragon Quest Builder's musical score feels disappointing. The tracks aren't bad, particularly for fans of previous games in the series, but given enough time, their repetitive nature is likely to become a nuisance. And though the game runs at a serviceable pace in TV mode, players who often play their Switch in handheld mode are likely to spot a noticeable drop in the overall framerate — not enough to make the game unplayable, but certainly enough to be jarring to more discerning eyes.

It's hard not to be charmed by Dragon Quest Builders. The team at Square Enix have managed to improve upon the concept of a crafting-focused sandbox game simply by adding in a touch of direction and personality. Players are still able to tear down and rebuild the world as they see fit, but the addition of townspeople and objectives makes Builders feel like a much more robust experience than similar games that came before it, even if it does at times feel a little clumsy. The resulting mix is by no means perfect, but Dragon Quest Builders still has more than enough content on offer to keep Nintendo Switch players satisfied for the foreseeable future.

This review is based on a Nintendo Switch download code provided by the publisher. Dragon Quest Builders is available in retail and digital stores now for $49.99. The game has been rated E for Everyone 10+ by the ESRB.