Earlier on Monday, Blizzard revealed some of the balance changes that are set to hit the upcoming Update 10.2. Those changes are going to hurt. They're going to hurt a lot and they will definitely change the meta going forward for nearly every single class in the game.

To wrap up this Monday, Shacknews is going a little farther in on these changes and what they mean for the game going forward. 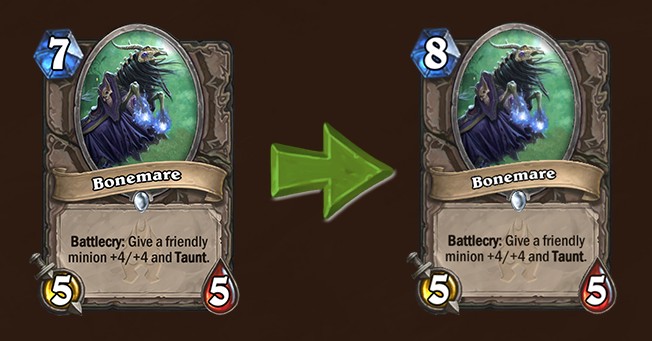 Blizzard explanation: Bonemare has been quite strong in both constructed and Arena. It has a big, immediate impact on the board, and since it's neutral, it's been finding its way into a wide variety of decks.

Increasing its mana cost by 1 will give opponents more time to utilize powerful late-game cards to counteract Bonemare's effect on the board.

Shacknews analysis: Bonemare has been a killer across all facets of Hearthstone. It often put games far out of reach as a Turn 7 drop, creating both a large Taunt body and its own 5/5 body for opponents to have to try to clear out. It was a tough hill to climb and fit in a large number of decks: Zoolock, Keleseth Rogues, Summoner Priests, Jade Druids, Midrange Paladin, Midrange Hunter, and the list goes on. That's without even mentioning the massive impact it's had on Arena.

Yes, this nerf is arguably overdue. But Bonemare is still going to do some heavy damage. At Turn 8, it just feels a little more fair. It's not going anywhere and will still find homes in a lot of decks. It's also another potential dud card for Priest to pull out of Free From Amber, which makes this a very slight nerf to that aforementioned Summoner Priest. 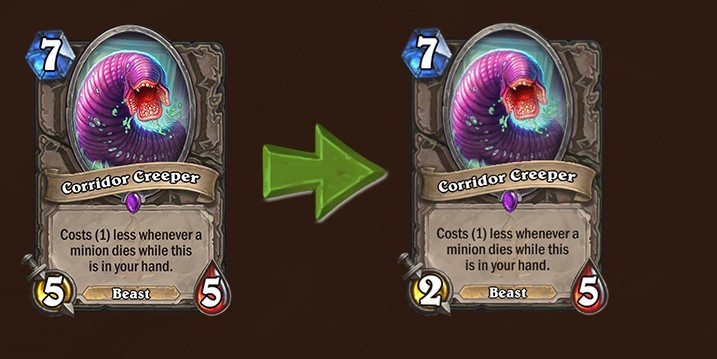 Class: Neutral
Now has 2 Attack. (Down from 5)
Meta Impact: High

Blizzard explanation: Due to the way that Corridor Creeper's mana cost reduction works, it can cause big swings based on whether or not it happens to be in-hand at the start of the game.

Since it's a very strong neutral card, Corridor Creeper has been played by a lot of classes. By lowering its attack, we reduce the overall swing potential and power level of the card, but still allow players who draw it early to benefit from having a low-cost minion to play when the game state is ideal.

Shacknews analysis: Corridor Creeper, NO! All you wanted was to be a 5/5 Turn 3 drop. Was that so terrible? Well... yes, that was very terrible, but I feel like this fix was a little too extreme.

A 2/5 drop means Corridor Creeeper can still survive in Arena, but it's all but dead in the constructed meta. Its stat drop means it's just a gimmicked Carrion Grub. That weak Attack stat means it'll have almost no impact on the board and won't swing the game nearly as much as it used to. What's unfortunate is that it wasn't entirely a brainless card. Players had to think about whether to put all their cards on the table and risk having their board cleared off or anticipate their board getting cleared and have this trump card ready to go.

The Creeper's Beast synergy means it'll still have a place in Aggro Druid decks, where it can be buffed with Mark of Y'Shaarj or the Druid's various buffing spells. But it's hard to justify a regular deck slot for this guy now. If it was up to me, I'd have adjusted the condition to only reduce its cost for killing friendly or enemy minions. But reducing the Attack stat just makes it next to useless. Rest in peace, you magnificent creature.

Blizzard explanation: As we move closer to the new Hearthstone Year, we had some concerns about allowing Patches to remain in his current state after moving out of Standard. Patches' strength has caused almost every class to add some Pirates just to benefit from him, and his early game power forces control decks to include a good answer to him. This change should give Wild players more flexibility when building their decks.

Removing Charge will lower his power level, ensuring he shows up in fewer decks and allowing opposing players some additional time to respond to Patches, making him less "in charge" of the early game.

Shacknews analysis: Alas, Patches is no longer in charge. Now that this obligatory statement has been made, let's look at why this is such a drastic change and not necessarily for the better.

What's interesting is that the Patches nerf appears to have been designed with the Wild player in mind. This sounds like an acknowledgement that without keeping cards like Patches and... oh, say... Fiery War Axe in check, Pirate Warrior would rule the Wild meta for perpetuity. That's all well and good, but then why make the nerf now? It's been terrorizing the Wild meta for almost a year and had a massive impact on the Standard meta at the same time. It's the timing of this nerf that's most interesting, because it comes far too late for any real impact on the Standard meta, while the Wild meta has already had a year to adapt to Pirate decks.

Timing issues aside, this tweak now makes it worth asking, "Just why is Patches a Legendary?" What makes Patches a particularly Legendary minion now? He's a 1/1 that can't do anything when summoned. He has no interesting Battlecry or Deathrattle, he can't Charge, he doesn't impact the board in any particular way, and he's easily removed. He's Shifter Zerus cosplaying as a pirate. He fires out of a cannon and just stares at you for a turn, like a Sword of Damocles that's made out of rubber.

Patches has been a lot of fun and it was going to be fun to see what he could do in the confines of Wild. Sadly, Blizzard decided to do more than make him walk the plank. Poor Patches got fired out of a cannon -- and not in the usual way.

Class: Priest
Now reads: Battlecry: If your deck has no duplicates, your Hero Power costs (1) this game.
Meta Impact: High

Blizzard explanation: In a similar vein to Patches the Pirate, we had some concerns about allowing Raza to remain in his current state forever. Raza is currently an important combo piece along with Shadowreaper Anduin, and can lead to games that rely heavily on drawing him by turn 5. Adjusting his Battlecry will lower his overall power level when combined with Shadowreaper Anduin in Standard, and keep his power level reasonable in Wild as we prepare for the new Hearthstone Year.

It's not much fun to be on the other side of that, so in that sense, this change was long overdue. A reduction of the Hero Power cost sounds much more reasonable, given that Shadowreaper Anduin is still capable of doing massive damage in one turn, especially behind Lyra the Sunshard and Radiant Elemental. Highlander Priest is definitely on the ropes, but it isn't entirely dead and can still be plenty effective.

What makes this such a high impact for the meta is that it arguably makes the Spiteful Summoner Priest the stronger Priest deck. It's a faster deck, it gains board presence quickly, and can overwhelm the opposition with increasing Attack stats from minions like Shadow Ascendant and Cobalt Scalebane. Spiteful Summoner Priests have been filling the Ranked ladder more and more in recent weeks. That number was expected to grow after the new Hearthstone year, but with this patch incoming, that turnover is coming a lot sooner than anyone thought.

What are your thoughts on these changes? Join the conversation and let us know how this patch is going to affect your decks moving forward.